Incorporating the Use of Silver Diamine Fluoride

Following are strategies for implementing this minimally invasive option into the caries management armamentarium. By Brooke M.O. Fukuoka, DMD

Oral health professionals need to be knowledgeable about the causes behind staining, the correlation between oral pH and dental erosion, and appropriate polishing choices for different patient types. By Sharon L. Mossman, RDH, EdD

The Role of Gloves in Breaking the Chain of Infection

The dental hygiene scope of practice regarding the use of N2O-O2 differs from state to state. By Diana B. Aboytes, RDH, MS

The Ethics of Off-Label Drug Use

With a continued rise in the use of off-label drug therapies, oral health professionals need to be aware of related legal and ethical considerations. By Kristen M. Stephens, RDH, MS, JoAnn Gurenlian, RDH, MS, PhD, AFAAOM

Caring for Patients Who Consume Cannabis

Most oral health professionals don't consider themselves public relations (PR) experts. After all, our role is to prevent and treat disease. Yet our efforts to improve oral health can be seen as a PR opportunity. By Jill Rethman, RDH, BA

To Retip or Not to Retip Dental Instruments

While many instrument sharpening companies offer retipping services, it is not the ideal way to replace worn instruments. By Mary Kaye Scaramucci, RDH, MS

A listing of featured products. By The Editors

The Cavitron® family offers a broad selection of ultrasonic scaling inserts to fit the needs of every practice and patient. By Dentsply Sirona

Results of a randomized controlled trial conducted in Spain found that scaling and root planing may offer significant oral health benefits to patients with type 2 diabetes. By The Editors

Joan Andersen Phelan, RDH, MS, DDS, co-author, with Olga A.C. Ibsen, RDH, MS, of the popular textbook Oral Pathology for the Dental Hygienist With General Pathology Introductions, now in its seventh edition, passed away after a prolonged illness in January. By The Editors

Avoiding the flu may be more difficult than previously believed as researchers have found that it is transmitted via aerosols, not just droplets resulting from sneezing or coughing, as was once thought. By The Editors 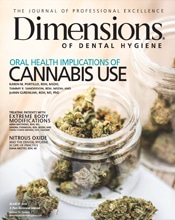