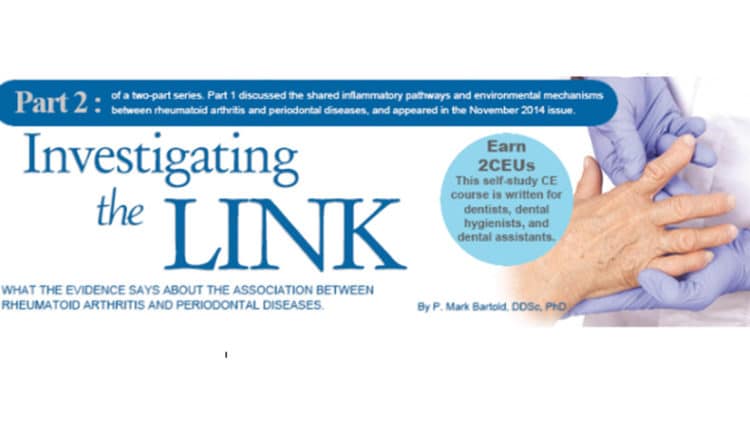 What the evidence says about the association between rheumatoid arthritis and periodontal diseases.

By P. Mark Bartold, DDSc, PhD On Dec 8, 2014 0
PURCHASE COURSE
This course was published in the December 2014 issue and expires December 31, 2017. The author has no commercial conflicts of interest to disclose. This 2 credit hour self-study activity is electronically mediated.

In light of their similar epidemiological patterns, environmental factors that influence disease manifestation, and comorbidities with similar systemic conditions for both rheumatoid arthritis and periodontitis, an interrelationship between these two conditions seems plausible. 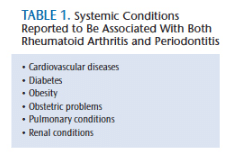 PERIODONTAL PATHOGENS AS AN INFECTIVE SOURCE

The claim that rheumatoid arthritis is caused by some form of infectious agent has been postulated for more than 70 years and is still under consideration.13 Numerous studies in a variety of animal models have demonstrated that arthritis can develop following exposure to exogenous infections.13 While extrapolation from animal models to human disease must be done with caution, the findings from these animal models lend support to a role for various types of infections in genetically susceptible individuals in the development of human rheumatoid arthritis.14 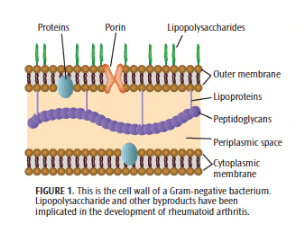 Several studies have demonstrated that patients with rheumatoid arthritis, compared to nonrheumatoid arthritis controls, have elevated antibodies in their serum against several bacteria associated with periodontitis. These includes Porphyromonas gingivalis, Prevotella intermedia, Prevotella melaninogenica, Bacteroides forsythus, and Aggre­gati­bacter actinomycetemcomitans.17,18 Furthe­rmore, elevated antibodies and DNA for B. forsythus, P. intermedia, P. gingivalis, and Fusobacterium nucleatum have also been identified in synovial fluid.19–21 These findings suggest that periodontal pathogens may translocate from the periodontal tissues to the joints, where they could exacerbate the inflammatory processes occurring within rheumatoid joints. 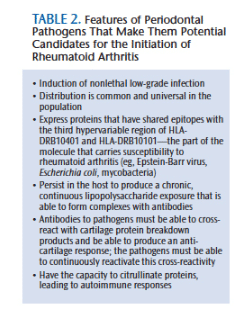 During the course of inflammation, proteins may undergo a process called citrullination—which results in a structural change to proteins through conversion of the amino acid arginine to citrulline.22 Citrullination of proteins arises from the action of enzymes, known as peptidyl arginine deiminases (PAD). The change in protein structure as a result of citrullination results in proteins becoming antigenic, which leads to the production of anticitrullinated peptide antibodies. The inflamed periodontium is a potential site where citrullination can occur, and anticitrullinated antibodies can result from this process.23 If such antibodies are produced at sites of inflammation (ie, during the development of periodontitis), prior to inflammation developing in the joints, the possibility of an enhanced antibody reaction occurring is very high once joint inflammation associated with rheumatoid arthritis develops.24 Importantly, anticitrullinated peptide antibodies have a high predictive value for rheumatoid arthritis onset several years before it is evident clinically, and are also associated with more severe clinical outcomes.25,26

Recently, P. gingivalis has been reported to be the only bacterium known to produce a PAD enzyme capable of causing protein citrullination.27 Should this bacterial enzyme be able to gain access to the periodontal tissues and be actively involved in protein citrullination, an additional pathway for citrullination to occur in patients with periodontitis is developed.28 This concept provides a novel link between periodontal infection and the development of rheumatoid arthritis (Figure 2). 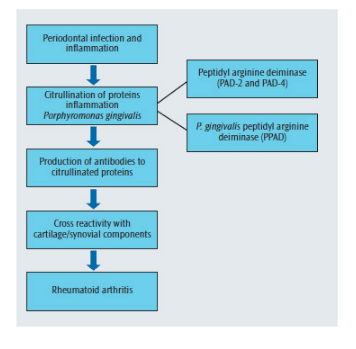 The primed inflammatory response, or “two-hit” model has been proposed to explain how periodontitis and rheumatoid arthritis might be interrelated.29 This model suggests that a primary hit of chronic inflammation via chronic periodontitis followed, at a later time, by a secondary inflammatory hit in the joints to induce rheumatoid arthritis can lead to an exacerbated inflammatory response (Figure 3). These heightened responses may lead to increases in numerous mediators of systemic inflammation in the circulation, which may stimulate cells in the joints and the periodontium to mediate further tissue destruction. 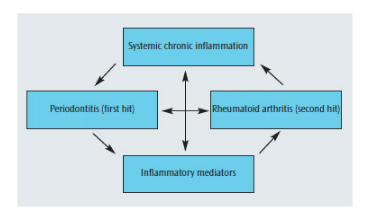 Create an Opportunity for Intervention 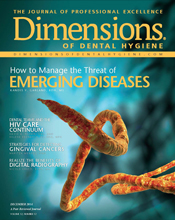