Early detection and treatment are integral to delaying the malignant transformation of proliferative verrucous leukoplakia.

By Pallavi Parashar, BDS, DDS, FRCD(C) On Dec 17, 2012 0
PURCHASE COURSE
This course was published in the December 2012 issue and expires December 2015. The author has no commercial conflicts of interest to disclose. This 2 credit hour self-study activity is electronically mediated.

The term oral leukoplakia describes white lesions on the oral mucosa that cannot be removed by scraping and are not diagnosed clinically as any other disease.1 A multifocal oral leukoplakic variant, known as proliferative verrucous leukoplakia (PVL), was first described in 1985 by Hansen et al.2 They identified this specific variant in 30 patients and claimed that it was of unknown origin with a strong propensity to undergo malignant transformation. The World Health Organization further described PVL as a rare yet distinctive, high-risk leukoplakia without a single diagnostic sign or symptom, but with specific features and behaviors.3

PVL describes a white lesion that gradually exerts clinical and histopathological changes. It often presents initially as a single lesion, but almost always evolves into a multi-site disorder.1 Prior to 1985, PVL was referred to as oral florid papillomatosis. 4 It is classified as a potentially malignant disorder of the oral cavity.

PVL is more common among women than men at a four to one ratio.5 In a study involving 30 patients with PVL, 80% were women.4 The average age of diagnosis is 62; PVL rarely presents before the age of 45.6 The etiology of PVL is unclear. Tobacco does not seem to be an etiologic factor as the majority of patients with PVL (63%) are nonsmokers.7 Habits involving alcohol consumption have not been widely investigated.5 Additionally, no correlation between immunodeficiency and PVL is known.1 However, there does appear to be a correlation with the human papillomavirus (HPV). A study by Palefsky et al found that 89% of patients with PVL tested positive for HPV.8 Another study found that up to 24.1% of PVL samples contained HPV DNA.9 Specifically, a high-risk variation of the virus, HPV-16, is thought to be involved in these lesions. In contrast, Fettig et al found no association between PVL and HPV.10 Epstein-Barr virus may be involved in some PVL cases.4 Marx et al found that Candida was identified in the majority of PVL cases they investigated.6 However, it is still uncertain whether the identification of the Candida species is a coincidental finding in such cases since the rough and corrugated surface morphology of PVL can encourage entrapment of Candida organisms.6 Specific gene aberrations and telomerase alterations have also been identified in PVL cases.5,6

PVL can affect any oral mucosal surface, and is most commonly associated with the buccal mucosa and tongue.1,2,11 Other oral sites include the palatal mucosa, floor of the mouth, and lips. The gingiva and periodontal sites are frequently involved.5,10 In one study of 47 patients with PVL, 87.2% exhibited symptoms on the alveolar crest mucosa, which Gandolfo et al classified into three subareas: keratinized mucosa (mucosa coronal to the mucogingival junction in edentulous areas), gingiva (mucosa coronal to the mucogingival junction in the dentate area), and alveolar mucosa (mucosa apical to mucogingival junction).5 Cutaneous involvement is rare, with only one case reported.12

PVL initially presents as a single distinct white lesion or scattered multiple irregular white patches or plaques (Figure 1 through Figure 4). With time, additional identical lesions appear surrounding the initial lesion.1,4 The presentation is often flat and white with a rough, grainy, or verrucous surface.1 These lesions represent the concept of field cancerization, which suggests that the entire epithelial surface is at increased risk of developing premalignant and malignant lesions due to multiple genetic abnormalities in the whole tissue region, and therefore the normal mucosa undergoes gradual transformation — both clinically and histologically.6 Clinically, PVL follows a pattern of transformation, starting with an innocuous white lesion(s) that progresses to verrucous hyperplasia, and then can evolve into malignancies, such as verrucous carcinoma and squamous cell carcinoma.6 Diagnosis of these clinical lesions is often delayed as multifocal involvement is progressive over time.4 Although most initial lesions are asymptomatic, sometimes some redness and pain are present.6 Clinical evidence of ulceration and induration in longstanding PVL may be an indication of malignant transformation.6

Histologically, PVL has four stages of development: hyperkeratosis without any cellular atypia, verrucous hyperplasia, verrucous carcinoma, and squamous cell carcinoma.13 Verrucous hyperplasia1 refers to a lesion that is either an irreversible precursor to verrucous carcinoma or a morphological variant of verrucous carcinoma (Figure 5).7 Previously, Hansen et al proposed a microscopic grading system for PVL using a scale of one to 10 to define the severity of cellular changes.2 Although histopathology is helpful in arriving at a diagnosis, the histologic diagnosis depends on the area biopsied. Thus, PVL may have multiple histologic presentations  ranging from benign hyperkeratosis to carcinoma.2,4 The histopathologic features are progressive, suggesting that the diagnosis may change over time.1 Sometimes the initial lesion may display a histologic pattern with a collagenous lymphocytic infiltrate, often seen in lichen planus. This can confuse the diagnosis.1 In advanced cases, the underlying bone may be eroded.1

A PVL diagnosis is made based on a combination of clinical and histologic findings, including clinical appearance and extension. In a recently published article, a set of major and minor criteria as well as specific combinations among them have been proposed for diagnosing PVL14 (Table 1). However, this proposal still awaits unanimous acceptance and modifications have been recommended.15

The goal of treatment is to delay or stall the malignant transformation of PVL lesions. However, there is a lack of consensus regarding which management protocol is most effective.4 A complete head and neck exam should always be performed.6 Excision is recommended as long as it is feasible based on size and location. Chemo prevention that includes 2 months of treatment with fluconazole and nystatin oral suspension is also recommended. Some patients cannot take the antifungals due to side effects or interactions with current medications. However, Marx et al acknowledge that this form of chemo-prevention protocol is empirical.6 Although laser ablation is not recommended due to its association with rapid recurrence, some investigators have experimented using lasers (Co2 and Nd:YAG) and suggested that the recurrence potential is similar to that of scalpel biopsy.4,6 Radiotherapy does not alter the progression of PVL lesions.6 Femiano et al reported that patients treated with surgery and the antiviral, methisoprinol, experienced significant improvement, but these data need further confirmation.16 Photodynamic therapy has also been tried with varying results.

PVL lesions typically undergo multiple recurrences with a high risk of malignant transformation over 5 years to 15 years. Of the 30 patients who were originally described by Hansen et al, 13 died from the disease.2 In another study that analyzed the clinical progression and outcomes in 54 cases with PVL, 38 patients showed progression to carcinoma during an average follow up of 111/2 years, and 21 of those succumbed to oral cancer.17 A higher incidence of recurrence and malignancy was noted with lesions affecting the gingiva.4

Malignant transformation occurs in almost 74% of PVL cases, although the transformation may range between 40% and 100%.1,4 One study found that recurrence after treatment was found in 86.7% of cases and newer lesions arose in 83.3%.4 Lymph node metastasis, both regional and distant, is very rare.6

The initial appearance of PVL may mimic benign processes, such as hyperkeratosis, lichen planus, or candidiasis.6 However, gradual, widespread involvement and failure to manage these lesions are indicators of PVL. Hereditary benign intraepithelial dyskeratosis or multiple merged lesions of condyloma acuminatum may resemble PVL.6

Lichen planus is most frequently confused with PVL. It is a chronic disorder of the skin that affects mostly middle-aged women. Oral lichen planus usually presents as bilateral and sometimes multifocal pinpoint white papules that gradually enlarge and coalesce to form a broad white plaque. It may be asymptomatic, although discomfort is noted in lesions that present with redness and surface ulceration.18 Hyperkeratosis, which refers to a histologic description of thickened keratin layer of the surface epithelium, is seldom multifocal and has a nonaggressive and benign clinical course.19

Limited knowledge, an increased risk of malignant transformation, and a high recurrence rate make the overall management of PVL challenging. Since PVL frequently appears as an innocuous white lesion, it may be overlooked or considered insignificant.1

Because PVL has a high rate of malignant transformation, in contrast to other leukoplakias’ very low potential (5%), early diagnosis is imperative.1 Close patient follow-up, possibly every 2 months, may be necessary to assess for progressive changes. Referral to a specialist is appropriate for follow-up and management. Patients need to understand that the lesions are not contagious and that PVL is an aggressive lesion with a relentless growth pattern and often has poor outcomes.

Dental hygienists play an important role by identifying changes affecting the oral mucosa. Because dental hygienists often see patients frequently for periodontal recare appointments, they may notice subtle changes before other health care providers. PVL can have life threatening consequences if not diagnosed quickly and managed closely. Dental hygienists are key members of the oral health care team and their observations can make the difference between life and death.

Pallavi Parashar, BDS, DDS, FRCD(C), is a board-certified oral pathologist and a diplomate of the American Board of Oral and Maxillofacial Pathology. A fellow of the Royal College of Dentists of Canada and the American Academy of Oral Medicine, Parashar is an associate clinical professor and the Oral Medicine Graduate Program codirector at the University of Alberta, Edmonton, School of Dentistry. She can be reached at: [email protected] 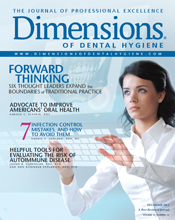