Recent media coverage highlighting the potential dangers of routine radiography has prompted many patients to ask their dental professionals about minimizing radiation exposure. In 2012, an article linking routine dental X-rays and meningioma (tumors in the layers surrounding the central nervous system) was published in the journal Cancer.1 News of this publication prompted the general public to voice concern about the risks of dental radiography, particularly bitewing radiographs. In response, the American Academy of Oral and Maxillofacial Radiology (AAOMR) released a position paper regarding the study—pointing out flaws in the research’s design, such as the use of patient memory to determine the history of X-ray frequency.2 This is not a dependable data source, as most dental patients cannot remember when, how often, or what type of dental radiographs they’ve experienced in the past.

Dauer et al3 recently documented the doses of radiation associated with bitewing radiographs. They concluded that the likelihood of small radiation doses causing cancer is low. The study found that the amount of radiation emitted during the exposure of bitewing X-rays comprises a tiny part of the total amount of radiation to which people are exposed every day.3 In addition, dental imaging contributes only 2.5% of the total radiation that patients receive during diagnostic procedures.4 Computed tomography (CT), for example, can create an exposure of 2,000 microsieverts (?Sv) to 10,000 ?Sv compared to 35 ?Sv to 175 ?Sv for a full-mouth series of X-rays, or about 1 ?Sv for a periapical radiograph.5

The American Dental Association (ADA) urges oral health professionals to consider the risk-to-benefit ratio of radiation exposure when determining the need for dental X-rays.4 The overarching principle of “as low as reasonably achievable,” or ALARA, encourages clinicians to reduce radiation exposure by taking as few X-rays as possible while still providing comprehensive care. This can be accomplished by thoroughly assessing previous imaging, and customizing patient recare radiographs to reflect caries incidence and periodontal status.

Current ADA recommendations for prescribing dental radiographs state that a proper radiographic prescription for every patient can reduce radiation exposure. Patients with stable periodontal health and a low caries rate may be able to increase the time between bitewings from annually to every 18 months—or even once every 2 years. Considering prior imaging by obtaining and reviewing previous full-mouth series or panoramic X-rays can eliminate the need to take new radiographs.

Dental practices should adhere to the recommendations for radiation safety outlined by the National Council on Radiation Protection & Measurements.6 When these guidelines are followed to the letter, a leaded apron is not necessary. Most offices, however, are not able to implement them all, thus, every patient should be covered with a lead apron and thyroid shield prior to the taking of dental X-rays. The proper use of leaded aprons and thyroid collars shields the gonads and thyroid gland from radiation exposure, which is particularly important among vulnerable populations, such as children and pregnant women.5 The thyroid collar should fit snugly against the neck (like a turtleneck sweater) in order to be effective. When taking routine bitewing and periapical radiographs, a thyroid collar should be used. An exception to this rule is panoramic imaging because a thyroid collar can obscure large areas of the target zone.

Leaded aprons and collars should be routinely examined for evidence of cracking. A fluoroscopic examination performed by qualified personnel can confirm cracks in the lead shielding. When not in use, the shielded aprons should be hung from a hook or draped over a handrail to minimize the likelihood of cracks.5

The use of extension cone paralleling (XCP) film-holding instruments can minimize the need for retakes. Seasoned dental hygienists and dental assistants may feel confident enough to work without them, but clinicians with less experience will benefit from their use.

While expensive, the conversion to digital imaging reduces overall radiation exposure by 25% to 60%.9 Dental practices that have transitioned to digital imaging should inform patients they have taken the necessary steps to reduce exposure to radiation. There is a strong perception among patients that offices employing the most current technology are better positioned to address their needs. In addition to reducing radiation exposure, digital imaging facilitates the transition to electronic health records—another benefit that patients may not immediately appreciate. The use of electronic health records enables patients’ charts to be easily transferred to a specialist for consultation, and preserves the quality of images by omitting duplication of analog images.

A collimator is a metallic barrier with an aperture in the middle that is used to reduce the size of the X-ray beam, and, thereby, the volume of irradiated tissue. Round and rectangular collimators are most frequently used in dentistry. Dental X-ray beams are usually collimated to a circle 2¾ inches in diameter. When an X-ray beam is directed at a patient, the hard and soft tissue absorb about 90% of the photons, while approximately 10% pass through the patient and reach the film. Collimating the X-ray beam reduces the exposure area and, thus, the number of scattered photons reaching the film.5 Collimation may also increase image quality.

Rectangular collimation is easy to use for bitewing X-rays, but can be challenging when taking periapical X-rays in patients with very long roots or severe gagging tendencies; during endodontic treatment; and in patients wearing rubber dams. In these instances, clinicians may find it necessary to use a round collimator. Rectangular collimation should be used as often as possible with children, as they are at greatest risk of radiation’s negative effects.

A round collimator produces a beam that is more forgiving when taking periapical radiographs because the beam is divergent. Rectangular collimation restricts the X-ray beam and produces a pattern that is slightly larger than the target film or digital sensor. Radiation exposure is much lower because of the smaller beam and limiting scatter radiation.5 Rectangular collimation requires the clinician to be more careful in positioning the film/sensor, patient, and X-ray tubehead.

Cone cutting is a common error when using a rectangular collimator. It occurs when the film or sensor is not directly aligned with the X-ray beam. With rectangular collimation, this cone cut looks like a vertical or horizontal white area (Figure 2). Cone cuts typically appear on the periphery of the images and do not usually interfere with the radiograph’s essential elements. If clinicians are not careful with positioning, however, the cone cut can be so large that the image needs to be retaken. Cone cutting is also not aligned with the ALARA?principle.

Radiation exposure can be diminished through conservative radiographic prescriptions and the use of film-holding instruments, higher film speeds, digital sensors, and collimation. When reassuring patients concerned about the safety of dental radiography, a discussion about the implementation of these protective strategies is appropriate. Patients can be referred to current literature on the subject or the information can be included on the practice’s website.

Imaging Techniques for Patients with Cleft Lip and/or Palate 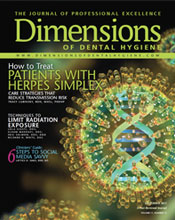