The Oral Implications of Celiac Disease

What you need to know about this common autoimmune disorder that results from an exaggerated immune response to gluten.

By Nicole Greco, BSDH, MA On Jan 16, 2009 0
PURCHASE COURSE
This course was published in the January 2009 issue and expires January 2012. The author has no commercial conflicts of interest to disclose. This 2 credit hour self-study activity is electronically mediated.

This course was developed in part with an unrestricted educational grant from Colgate Oral Pharmaceuticals.

Celiac disease, also known as gluten-sensitive enteropathy and nontropical sprue, is a common autoimmune disorder that is triggered by ingesting wheat gluten and related proteins of rye and barley in genetically susceptible individuals.1 Once considered a rare disease limited to children, it is now estimated that as many as one in every 100 Americans has CD.2 CD is more common in people of European descent and those who have autoimmune disorders like lupus, type 1 diabetes, rheumatoid arthritis, autoimmune thyroid disease, and microscopic colitis.

CD is the result of an unchecked immune reaction to gluten. This unlimited response results in inflammation of the proximal small intestine where the partially digested gluten proteins contact the gut immune system. This immune response extends beyond just a direct response to the exogenous substance, it includes a potent and multifaceted immune response to auto-antigens, resulting in substantial damage to the structure and function of the gut and other organs.3 The term gluten-sensitive enteropathy (GSE) refers to the histologic abnormality of the small intestine, which ranges from minimal lymphocytic infiltration of the intestinal epithelium to severe atrophy of the villi.4 The villi are the tiny hair like projections found in the small intestine. The villi’s role is important in the absorption of vitamins, minerals, and nutrients. Without the villi, the body is unable to absorb the necessary nutrients for health and growth.

The clinical presentation of CD is highly variable. Table 2 lists the most common symptoms of CD in children.9,10 See Table 3 for a list of symptoms seen in adults with CD.9,10 Many adult patients have little or no gastrointestinal symptoms, while exhibiting extra-intestinal features.

CD is familial, with significant morbidity if untreated. CD is one of the most significant causes of chronic malabsorption in children. Complications of CD include lymphoma, osteoporosis, anemia, and seizures.5 CD is associated with a number of autoimmune disorders, most commonly Sjögren’s syndrome, type 1 diabetes and thyroid disease.6,7 See Table 1 for a list of some of the disorders that may be related to CD.

Primary Sjögren’s syndrome is an autoimmune disease characterized by dryness of the mouth and eyes and by lymphocytic infiltrations of the salivary glands. In addition to the mouth and salivary glands, other parts of the gastrointestinal system may be involved.11 Other symptoms include dysphagia (difficulty swallowing) due to the decreased saliva production, atrophic changes in the antrum, gastric inflammation, impaired pancreatic function, and liver diseases, including biliary cirrhosis and sclerosing cholangitis.11 Several studies revealed a high prevalence of CD among patients with Sjögren’s syndrome. Iltanen (1999) and colleagues12 showed that 14.7% of 34 patients with Sjögren’s syndrome had CD confirmed by small bowel biopsy. A more recent study (2004) found the prevalence rate of CD to be 4.5 cases per 100 persons, confirmed by small bowel biopsy.13 Signs of small bowel mucosal inflammation can be seen in patients with primary Sjögren’s syndrome even without CD; whether the gut is a target of multiorgan involvement of Sjögren’s syndrome remains to be seen.

The optimal management of the oral component of Sjögren’s syndrome can improve a patient’s quality of life.14 Critical to this process is patient education based on rational assessment of the patient’s complaint, functional ability of the salivary glands, and the status of the oral mucosa and dentition. The patient should be educated on the spectrum of potential problems and of the different products available to manage specific oral complaints and to increase oral comfort.15

Recurrent aphthous ulceration (RAU) is an inflammatory condition of unknown etiology characterized by painful recurrent, single, or multiple ulcerations of the oral mucosa.16 Recent studies show inflammatory changes with increased lamina propria and intraepithelial helper-inducer T lymphocyte (CD4+) and suppressor-cytotoxic lymphocyte (CD8+) cells in the oral mucosa of CD patients after a local challenge with gluten. The prevalence of patients with celiac disease who have concurrent RAU ranges from 10% to 18%.16 The apthae usually resolve with appropriate management of CD.18

Most patients with RAU need no treatment because of the mild nature of the disease. Some manage with maintenance of good oral hygiene, the right kind of toothpaste (without sodium lauryl sulfate, which can be irritating), and occasional palliative therapy for pain.19

The relationship between enamel defects and CD was first described in the 1970s.20 The cause of the association between CD and enamel defects remains controversial. Defects may be a consequence of the disease itself because malabsorption syndrome may lead to hypocalcemia. A study investigating enamel defects among children with CD found enamel defects among 83.3% of the celiac children versus 53.3% of controls.21 These findings are important because if enamel defects provide useful information for diagnosing CD, children should be examined to obtain the earliest possible diagnosis. The prevalence of enamel hypoplasia is also higher in celiac adult patients when compared to control groups.22

Although enamel defects cause esthetic repercussions that require dental treatment, they may be of even greater value as an aid in the early diagnosis of CD.21

An association between CD and type 1 diabetes has been recognized for more than 40 years.23 Several studies, both in children and adults, have shown a 1.5% to 7% prevalence of CD in people with type 1 diabetes. There is some evidence that undiagnosed CD may not only coexist with diabetes but may precede it. A delayed diagnosis of CD may be associated with an increased risk for subsequently developing type 1 diabetes. When CD is identified and treated in early childhood, these children have a lower rate of developing diabetes compared to children in whom CD was diagnosed later in childhood or as adults.8 Auto-antibodies directed against islet cells are frequently present in untreated CD but disappear with the gluten free diet.24

The dental hygienist is well educated about the dental complications associated with diabetes. A proper and thorough assessment must be made to ensure early intervention and treatment.

Iron is absorbed by the proximal small intestine, the site of greatest damage in CD. Not surprisingly, iron deficiency is a common finding in newly-diagnosed CD patients.25 Pernicious anemia is also associated with CD, due to malabsorption. The anemias also usually resolve with the start of a gluten-free diet.26

The dental hygienist should assess the patient for loss of filiform and fungiform papillae, atrophic tongue, glossodynia, and dysphagia as these are oral signs of iron-deficiency anemia and pernicious anemia.27

Low bone mass is common in patients with newly-diagnosed CD.30 The mechanism for this effect may be due to malabsorption of vitamin D and calcium, and decreased intake of calcium because of lactose intolerance.31 Other factors such as gender, malnutrition, and physical activity also contribute to the risk of low bone density in CD.32 Low bone density associated with CD responds to a gluten-free diet with a gradual restoration of bone over 2 years.33 The earlier treatment is started, the better the response. Conversely, those young adults who were diagnosed early in life but were not compliant with the gluten-free diet were more likely to have low bone density.34

The dental hygienist is in an excellent position to assess the patient for early signs of CD, such as enamel hypoplasia or salivary dysfunction. Dental hygienists must be aware of the ingredients in the products they use in the operatory and those they recommend for at-home use as many dentifrices, prophy pastes, and fluorides include gluten. Gluten is readily absorbed by the mucous membranes so ensuring a patient’s safety is crucial when treating a patient with CD.

Colgate is generously providing the two CE units for this course at no charge to the first 300 ONLINE TEST TAKERS ONLY (with a passing exam). To take advantage of this offer, visit the CE page and enter in the following:
Enrollment Key: Colgate0109
Password:celiacgluten

The Importance of Salivary Flow 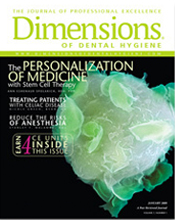