By Kathleen B. Muzzin, RDH, MS On Mar 14, 2012 0
PURCHASE COURSE
This course was published in the March 2012 issue and expires March 2015. The author has no commercial conflicts of interest to disclose. This 2 credit hour self-study activity is electronically mediated.

Tooth whitening has become one of the most requested procedures in esthetic dentistry. Many patients who undergo whitening treatment experience some level of dentinal hypersensitivity that can interfere with their ability to complete treatment. Whether whitening treatment is to be completed with over-the-counter (OTC) products or in office, patients should always receive a complete dental examination to assess oral health and the risk of dentinal hypersensitivity.

In-office whitening treatments use gels or pastes containing 15% to 40% hydrogen peroxide, and require a barrier to protect surrounding oral mucosa and prevent swallowing. Light sources are sometimes used to accelerate the whitening action. Dentist-dispensed whitening products use a range of 10% to 35% carbamide peroxide (adduct of hydrogen peroxide and urea) or 2% to 10% hydrogen peroxide gel in a custom-fitted tray that patients wear overnight or for a minimum of 2 hours per day. OTC options typically use 3% to 10% hydrogen peroxide in a variety of delivery methods, such as strips, wraps, trays, and paint-ons. How hydrogen peroxide lightens a discolored tooth is not fully understood, but the theory is that it diffuses through the enamel and dentin, creating a chemical reaction with the discolored particles within the tooth.1 During the whitening process, hydrogen peroxide is broken down and releases free radicals. The free radicals further the oxidation process by breaking up the large macromolecular stains into smaller stain molecules.2 These smaller molecules reflect more light, which results in a tooth that appears lighter in color.2

Whitening is generally a safe and effective treatment, but there are side effects and risks. If proper isolation is not employed, high concentration whitening agents can produce a chemical burn.3 Gingival and mucosal irritation is often related to poor tray design or improper application by the patient.4 Dentinal hypersensitivity is the most common side effect associated with whitening.5,6 Most patients describe the pain as a transient “tingling or shooting pain” that begins on the second or third day of treatment.3 Studies show that patients who use whitening agents for long periods of time have higher incidences of tooth sensitivity.7,8 The use of higher concentration whitening agents speeds up the bleaching effect, but can also produce significant pain.5,6 Some studies suggest that this sensitivity is due to the acidic nature of bleaching agents and the dehydrating effects of the glycerin added to most gel formulations.9,10

The most commonly agreed upon cause of dentinal hypersensitivity is the hydronamic theory or fluid movement within the dentinal tubules. With whitening-related hypersensitivity, some researchers believe that the cause is based on the peroxide penetrating the structure of the tooth, resulting in agitation of nerve receptors.11 Cooper et al1 found that 10% carbamide peroxide permeates easily through enamel and dentin, and can reach the pulp chamber within 5 minutes to 15 minutes.

Cooper and other researchers suggest that sensitivity is a temporary inflammatory response within the pulp.1,12,13

Enhancement of a whitening agent’s effect through the use of light, heat, or lasers has also raised concerns. A systematic review by Buchalla and Attin found that heating units used for in-office whitening increased the temperature within the pulp to 5.5 oC, and suggest that the combination of heat with the whitening agent may cause irreversible pulpal damage.14

Numerous desensitizing agents, such as fluoride, potassium nitrate, calcium phosphate technologies, and arginine calcium carbonate, are available to prevent whitening induced sensitivity.6,15-20 These agents are either incorporated directly into the whitening gel or are applied separately before or after the procedure is completed.
Fluoride occludes dentinal tubules by creating a barrier with calcium fluoride crystals on the tooth surface. This was thought to make dentin less permeable to whitening agents’ oxidizing effects, but Pashley et al21 disagree, asserting that the peroxide molecule is too small to be blocked by calcium fluoride crystals. A supporting study by Armenio et al15 evaluated the effects of a 4-minute application of a 1.23% sodium fluoride gel after treatment with 16% carbamide peroxide on sensitivity. They found that the sodium fluoride did not eliminate or reduce tooth sensitivity but did reduce pain intensity. Other researchers surmise that fluoride remineralizes and increases the microhardness of the enamel surface that was etched and softened during the whitening process.17,22,23 The daily use of fluoride and/or fluoride varnish application may be effective for patients with a history of sensitive teeth.15

Heat/light activation may reduce the efficacy of potassium nitrate and fluoride in decreasing dentinal hypersensitivity. Reis et al6 placed a desensitizing gel that contained potassium nitrate and fluoride for 10 minutes prior to bleaching. Three 15 minute applications of 35% hydrogen peroxide were given and each tooth was treated for 1 minute with an LED/laser light source. They found that the desensitizing agent was not effective in reducing tooth sensitivity. They surmised that heating the hydrogen peroxide increased the availability of oxygen free radicals, which allowed the bleach to diffuse through the tooth, reach the pulp, and cause an inflammatory reaction.6

To date there are no published studies that specifically measure the effects of inoffice application of Pro-Argin® technology on whitening-induced dentinal hypersensitivity, but it has been shown to prevent sensitivity when applied before or after dental procedures.20 Pro-Argin technology combines arginine, an amino acid found in saliva, with calcium carbonate. The arginine binds to the tooth surface forming a plug that contains arginine, calcium, phosphate, and carbonate, which is resistant to normal pulpal pressures and acid challenges. Pro-Argin technology is available in a paste that is applied chairside with a prophy angle and rotary cup.

Studies have also examined the effects of analgesics on reducing whitening sensitivity. Charakorn et al31 evaluated ibuprofen’s effects on sensitivity associated with in-office whitening. They compared patients who took 600 mg of ibuprofen 30 minutes before whitening with 38% hydrogen peroxide, to a placebo group. The ibuprofen group experienced a significant reduction in sensitivity immediately following the whitening procedure. However, 1 hour after whitening, the sensitivity returned and the pain was still present 24 hours later.31

Patients considering whitening treatment should first be questioned about their history of tooth sensitivity and examined for any areas of exposed dentin. Patients with pre-existing sensitivity should brush their teeth with a potassium nitrate desensitizing toothpaste before beginning whitening (Figure 1).21,32 Haywood et al32 compared patients who brushed with a dentifrice containing potassium nitrate and fluoride for 2 weeks before whitening to a group who used only a fluoride dentifrice. Patients who used the potassium nitrate dentifrice had less sensitivity and were more satisfied with their whitening experience than those using the fluoride toothpaste.32 A low concentration of carbamide peroxide should be used on patients with established sensitivity and they should brush their teeth with the desensitizing toothpaste 30 minutes before whitening begins.21 A common approach is to reduce the frequency or duration of treatment (Figure 2).18,21 Patients can whiten their teeth every other day18,21 or limit contact with a carbamide peroxide product to no longer than 1 hour a day and high concentration hydrogen peroxide products for no longer than 15 minutes per day.33,34 The concentration level of the whitening can also be reduced.5 Krause et al5 found that the color shade values for 10% carbamide peroxide and 17% carbamide peroxide gels were similar after 1 week of whitening. They also found that patients who used the 17% concentration reported more sensitivity than the 10% group.5

Even though tooth whitening is safe, potential risks do exist and need to be discussed with the patient prior to whitening. Clinicians need to take a proactive approach to preventing dentinal hypersensitivity and design an individualized treatment plan for each patient.

Kathleen B. Muzzin, RDH, MS, is a clinical professor at Caruth School of Dental Hygiene at Texas A&M College of Dentistry. She has published articles on dentinal hypersensitivity, dental aerosols, and infection control, as well as case reports on special needs patients. Muzzin is a member of the Special Care Dentistry Association and Dimensions of Dental Hygiene’s Peer Review Panel. 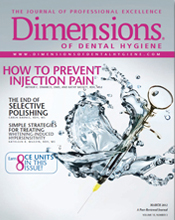