Does Periodontal Disease Increase the Risk of Pancreatic Cancer?

A look at the current research.

By Casey Hein, BSDH, MBA On Jul 14, 2008 0
PURCHASE COURSE
This course was published in the July 2008 issue and expires July 31, 2011. The author has no commercial conflicts of interest to disclose. This 2 credit hour self-study activity is electronically mediated.

In January 2007, a group of Harvard investigators published some research suggesting that periodontal disease—as a marker of a susceptible immune system—may indicate an increased risk for pancreatic cancer.1

Investigation of this possible association is in its infancy but preliminarily it appears that periodontal disease and pancreatic cancer may be linked by an underlying mechanism that is inflammatory driven. An understanding of this potential relationship may help dental practitioners to better educate their patients on the potential ramifications of systemic inflammation in the oral cavity relative to diseases of the digestive tract. While many unknowns still exist related to the etiology, diagnosis, and treatment of pancreatic cancer, this challenging disease may be prevented through aggressive changes in behavior and lifestyle. Greater awareness among dental practitioners regarding the various risk factors associated with this lethal type of cancer and preventive measures may provide an additional, albeit nontraditional, opportunity for identifying those at risk for pancreatic cancer.

INFLAMMATION AS THE CULPRIT

In a questionnaire-based study of 51,529 predominately Caucasian male health professionals, Michaud and colleagues,1 reported that periodontal disease was associated with a 64% increase in the risk of pancreatic cancer, after adjusting for smoking and other risk factors. The researchers also found that within this study population, periodontal disease with recent tooth loss was associated with a 2.7-fold increase in the risk of pancreatic cancer. Furthermore, they found that the timing and severity of periodontal disease, as manifested by recent tooth loss, may have a joint effect.

The first hypothesis1 is that periodontal disease may promote pancreatic carcinogenesis through inflammation. The investigators cite earlier reports2,3 that plasma C-reactive protein (CRP) levels—an important biomarker of systemic inflammation—were consistently higher in subjects with a history of periodontal disease than those with no history.

An alternative hypothesis1,4 is that periodontal disease may influence pancreatic carcinogenesis through increased generation of ­carcinogens, specifically nitrosamines. Nitro­samines are known to induce pancreatic cancer in animals and are considered potential carcinogens in human pancreatic cancer.4,5 Approximately 45% to 75% of nitrosamine formation is endogenously formed by salivary and gastrointestinal bacteria.4,6 The formation of nitrosamines in the oral cavity of individuals with poor oral hygiene is eight times higher than in individuals with good oral hygiene.7 Also, periodontal disease and poor oral hygiene are associated with higher levels of oral bacteria and elevated nitrosamine levels within the oral cavity. As such, this relationship may place certain individuals at greater risk because nitrosamines and gastric acidity may play important roles in pancreatic cancer.

Individuals afflicted with chronic pancreatitis are at greater risk for developing pancreatic adenocarcinoma.7-10 Research published by Wheatley-Price and colleagues10 suggests that inflammation plays a role in the disease etiology of pancreatic cancer through the different forms of several inflammatory pathway genes. The same genotype is associated with an increased risk of coronary artery disease, raising the possibility that inflammatory processes may be important etiologically in pancreatic cancer.10 Accordingly, the chronic, low level inflammation associated with periodontitis may convey a greater risk of pancreatic cancer.10

Stolzenberg-Solomon and colleagues4 examined the association between dentition history and pancreatic cancer on a prospective group of 29,133 Finnish men who smoked. They found that tooth loss was significantly associated with pancreatic cancer and that this trend was consistent across all categories of tooth loss. The researchers also reported that compared with those with less tooth loss, the edentulous subjects were more likely to have ulcers, which is linked to Helicobacter pylori infection.

Stolzenberg-Solomon and colleagues4 discussed several mechanisms that may explain the increased risk associated with tooth loss and pancreatic cancer, including the contribution of poor oral hygiene to more deleterious gastrointestinal flora, and consequently, increased nitrosation. Another theory raised by these researchers is that tooth loss may be an indicator of a less healthy lifestyle or of health status in general. For instance, tooth loss reduces masticatory ability11-12 thereby leading to consuming a less healthy diet.11,13-14 Edentulous individuals in the study had greater intake of total and saturated fat and diminished intake of folate, both dietary factors that are associated with a greater risk of pancreatic cancer.4,15 The analysis of the data controlled for these dietary factors and the factors did not modify the association that Stolzenberg-Solomon and colleagues found between tooth loss and pancreatic cancer.

Pancreatic cancer is the fourth leading cause (after lung, breast, and colo-rectum8) of cancer death in the United States,1 (approximately 30,000 new cases are diagnosed each year), and it ranks eighth in incidence in the world.4 Pancreatic cancer is a relatively uncommon malignancy.4 However, the mortality rate is very high and its lethality near universal,16 mostly due to the location of the pancreas, which makes it very difficult to access, and its proximity to other vital organs.17 Figure 1 illustrates the placement of the pancreas in the body. The overall 5-year survival rate is less than 4%.18 One of the reasons the survival rate is so low is that pancreatic cancer is difficult to diagnose at an early, resectable stage and less than 15% of cases are candidates for surgery.19 The current lack of a screening technique to accurately and cost-effectively detect pancreatic cancer in the general population before the onset of symptoms also impacts the ability to intervene in the early stages of the disease.16

Risk factors related to pancreatic cancer are classified as demographic, host-related, or environmental.16,20 With 80% of pancreatic cancer occurring between the ages of 60 and 80,21 the most important demographic factor is advancing age. Jewish descent, black ethnicity, and male gender are associated with a slight (less than two-fold) increased risk.21

TARGETING THOSE AT RISK

The survival rate of pancreatic cancer many be enhanced if the disease can be diagnosed in its earlier stages;34 a substantial body of data suggests that the detection of the very early stages of the disease allows for a better prognosis.16 As a result, the search for effective early detection tools has taken on a new urgency.34

Experts at a 2002 conference49 concluded that screening patients with a history of hereditary pancreatitis at age 40 and older is helpful in better identifying those who are at high risk of pancreatic cancer.

According to another consensus opinion,16 pancreatic cancer screening for those at high risk is recommended. For individuals in these high risk pools, diagnostic tools such as endoscopic ultrasound and endoscopic retrograde cholangiopancreatography may offer hope in earlier identification of at risk patients,16 as well as genetic testing and counseling to educate high risk patients.16

To date, the benefit of chemoradiotherapy in treating pancreatic cancer has been limited.50 However, a number of emerging molecular therapies, still under development, hold promise in effective treatment, including gene therapy, antiangiogenic agents, immunotherapy, and inhibitors of cell signaling.34 Chemoprevention, with drugs such as COX inhibitors8,51 and aspirin52,53 have shown some promise in reducing the risk of pancreatic cancer.

Because there is no agent proven to prevent pancreatic cancer, risk factor reduction lies at the heart of preventive strategies.16 This includes the ability of health care providers to identify individuals at high risk for pancreatic cancer, in addition to recognizing modifiable risk factors and strategies aimed at their elimination.34

Casey Hein, BSDH, MBA, is an assistant professor in the Division of Periodontics, Dental Diagnostics, and Surgical Sciences in the College of Dentistry of the Rady Faculty of Health Sciences at the University of Manitoba in Canada, where she also serves as director of education at the International Centre for Oral-Systemic Health, and director for Continuing Competency and Assessment for Dentistry and Dental Hygiene. She can be reached at [email protected] 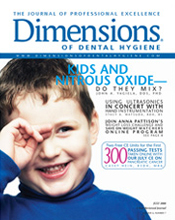