Biofilm Removal Is The Key

There is no doubt that ultrasonic instrumentation is an effective means of removing biofilm in the oral cavity. With its additional ergonomic benefits for the operator, ultrasonic instrumentation’s place in the dental hygiene armamentarium is cemented. However, the idea that ultrasonic scaling has additional bactericidal benefits is controversial, as there is no evidence from in vivo (in living organisms) studies on the subject. In the January 2012 issue of Dimensions of Dental Hygiene, A. Damien Walmsley, BDS, MSc, PhD, shared his thoughts about the topic of cavitation (formation of pulsating bubbles) and acoustic microstreaming (fluid flow generated by ultrasonic oscillations) in ultrasonic instrumentation. In this interview, Dr. Flemmig shares his viewpoints on this polarizing topic.

Are ultrasonic scalers capable of producing cavitation that can kill bacteria in the periodontal pocket?

There are two components to this question. First, there is evidence to support that some ultrasonic inserts/tips (UITs) produce cavitation in vitro (laboratory).1,2 The occurrence of cavitation is dependent on the configuration of the UIT, power setting, and time. Flat UITs, which are not well suited for subgingival debridement, have been shown to produce the greatest amount of cavitation.1 Round UITs need to be operated at high power settings or for several minutes at medium settings to generate detectable levels of cavitation.2 So far, it has not been assessed whether cavitation occurs around slim UITs that are often used for subgingival scaling.

Although these studies provide evidence that under some circumstances cavitation may occur around UITs in vitro, it has yet to be shown that cavitation occurs in the periodontal pocket during subgingival ultrasonic scaling. 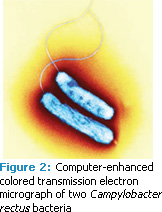 The second part of the question relates to ultrasonic instrumentation’s antimicrobial efficacy. in vitro studies assessing the killing of putative periodontal pathogens by ultrasonic scalers have shown controversial results. In one experiment, bactericidal acoustic effects were investigated without maintaining constant temperatures. The authors concluded that the observed bacteriolytic effects were due to incidental temperature increases.3 When temperatures were kept at physiological levels, neither ultrasonic nor sonic scalers caused any significant killing of Aggregatibacter actinomycetemcomitans, Porphyromonas gingivalis (Figure 1), Campylobacter rectus (Figure 2), or Peptostreptococcus micros.4 In this experimental set up, bacterial killing was only found following the use of an ultrasonic cell disruptor—a laboratory instrument generally used for breaking up bacterial cell membranes. The findings indicated that significantly greater energy is needed to kill bacteria than what is delivered by ultrasonic scalers. In another in vitro study, an ultrasonic scaler resulted in a greater reduction in spirochetes (Figure 3) in plaque suspension compared to a sonic scaler.5 However, no difference was found in the microbial composition in periodontal pockets following subgingival scaling using an ultrasonic or sonic scaler. Thus, there is no evidence to support the notion that ultrasonic scalers kill bacteria in periodontal pockets.

Can UITs remove biofilm from tooth surfaces beyond the reach of the tip?

This may depend on the design of the UIT. It has been demonstrated on extracted teeth that the area from which biofilm is removed is slightly greater when a UIT is operated with water compared to without water. However, the distance at which biofilm was removed away from the tip was limited to approximately 0.5 mm. Using cream cheese as a biofilm substitute, some ultrasonic UITs removed a larger area of the substitute than others. Slim UITs often used for subgingival scaling removed the biofilm substitute from an area less than 1 mm square (0.5 mm away from the tip), whereas wider UITs removed the substitute from an area up to 56 mm square (approximately 5 mm away from the tip).6 This effect has been attributed to microstreaming observed around the tip of a submersed  UIT.6 These findings, however, have to be interpreted with caution, as it has not been shown whether this biofilm substitute is similar physically to dental biofilms. Considering the adhesive and viscoelastic properties of biofilms, one may assume that it is more difficult to remove biofilm from a substrate than the cream cheese,  which was easily washed off by a stream of water. Thus, to achieve maximum biofilm removal in a clinical setting, it may be necessary to move the UIT over the entire tooth surface instead of relying on the remote action of the tip, which is limited at best. The efficacy of ultrasonic instrumentation, as well as hand instrumentation, is based on the meticulous removal of biofilm from the tooth surface, which is closely linked to the skill level of the operator. 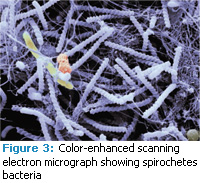 There is no question that ultrasonic scaling effectively reduces bacterial counts in the periodontal pocket. To what do you attribute this positive effect?

Ultimately, the removal of subgingival biofilm is what makes all forms of debridement successful. By inserting an oscillating instrument—whether it is ultrasonic or sonic—into the periodontal pocket, biofilm is removed, thereby reducing the bacterial count in the periodontal pocket. This results in the healing of periodontal tissue. Neither hand- nor machine-driven instruments selectively remove one bacterial species more than another. Both systematic reviews that have compared hand instrumentation vs power instrumentation (sonic as well as ultrasonic) in the treatment of periodontitis, did not find any significant difference in clinical outcomes.7,8 This further supports the notion that it is the removal of biofilm—not any other mechanism, such as cavitation or microstreaming—to which the clinical efficacy of scaling and root planing is primarily attributable. 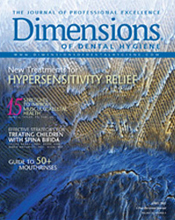