The Quelling of Inflammation

How the use of NSAIDs may affect the treatment of periodontitis.

By Nicole Greco, BSDH, MA On Nov 17, 2008 0
PURCHASE COURSE
This course was published in the November 2008 issue and expires November 2011. The author has no commercial conflicts of interest to disclose. This 2 credit hour self-study activity is electronically mediated.

The dental hygienist is on the forefront of assessing, treating, and educating patients on inflammation. The inflammatory process significantly affects the periodontium. Plaque biofilm contains a variety of gram-negative bacteria that release products around the gingival margin and interproximal areas. These products include endotoxins, cytokines, and protein toxins,1 which can lead to tissue injury, precipitating a cascade of events including peripheral inflammation.

Periodontitis is a chronic inflammatory disease that affects 22% to 40% of the population with varying degrees of severity.2 The primary etiologic factor is a subset of specific bacteria from the oral flora,3 which results in an immune response taking place primarily within the connective tissue of the gingiva.1 Failure to eliminate the causative factor results in prolonged release of inflammatory mediators, which disrupt tissue homeostasis and lead to attachment loss—the hallmark of periodontitis.4,5 Periodontal treatment primarily involves the mechanical disruption of microbial biofilms associated with the tooth surface and/or present within the periodontal pocket.6 However, pharmacologic intervention is indicated as adjunctive therapy in certain types of periodontitis. Non-steroidal anti-inflammatory drugs (NSAIDs) are used in this capacity for the treatment of periodontitis.7,8 NSAIDs such as ibuprofen, ketorolac, flurbiprofen, ketoprofen, diclofenac, aspirin, and aspirin derivatives are the traditional treatment for moderate inflammation and pain.9,10 NSAIDs can be broadly classified based on their chemical structure (see Table 1). NSAIDs within a group tend to have similar characteristics and tolerability. There is little difference in clinical efficacy among the NSAIDs when used at equivalent doses. Rather, differences among compounds are associated with dosing regimens (related to the compound’s elimination halflife), route of administration, and tolerability profile.

Prostaglandin (PG) levels are elevated in inflamed gingival and periodontal tissues. In vivo studies demonstrate that NSAIDs, which inhibit PG synthesis, are effective in inhibiting alveolar bone loss and reducing gingival inflammation in animal trials and humans.11-14 Moreover, several studies indicate that the addition of NSAIDs to nonsurgical periodontal therapy can have significant efficiency in slowing the rate of alveolar bone loss and reducing gingival inflammation.7,15 Theoretically, therefore, NSAIDs could exert preventive activity by slowing the progress of periodontal breakdown or by providing therapeutic effects by encouraging bone regeneration. PGE2 is a key mediator that is implicated in bone resorption by promoting osteoclast formation.16 Besides the direct inhibitory effect on several enzyme functions, the ability to induce changes in biophysical properties of membranes is also considered a possible contributory effect for the anti-inflammatory action.17,18 In this respect, suppression of PGE2 production in periodontal lesions with NSAIDs is important. Studies show that the use of NSAIDs as an adjunct to periodontal debridement in patients with chronic periodontitis provides a better clinical outcome and a significant decrease in inflammation.

Several lines of evidence of animal and human studies20 indicate that arachidonic acid metabolites, primarily PG, play a pivotal role as mediators of alveolar bone resorption. It seems that cyclooxygenase (COX)-2 is the enzyme primarily responsible for PGE2 production during periodontal infections.21 Inhibiting COX-2 blocks PG formation, ultimately preventing inflammation and sensitization of the peripheral nociceptors (sensory receptors that respond to pain).22 Long-term use of conventional NSAIDs can cause side effects such as gastric dysfunction, which is probably due to the suppression of physiological PG production by COX-1.23 Hence, selective COX-2 inhibitors may exhibit a better clinical risk/benefit ratio than classical NSAIDs.24 Vadar et al examined the effects when comparing a selective COX-2 (nimesulide) inhibitor to a nonselective COX-1/COX-2 (naproxen) inhibitor in combination with nonsurgical periodontal treatment, including scaling and root planing on patients with chronic periodontitis.25 After treatment, periodontal bleeding index (PBI) scores exhibited significant reduction on day 10 and at 3 months in all study groups. Nimesulide (COX-2 inhibitor) plus scaling and root planing therapy decreased PBI scores more than the placebo plus scaling and root planing therapy. This study suggests that nimesulide as a selective inhibitor of COX-2 may inhibit gingival inflammation even when administered for a relatively short period of time. These investigations suggest that NSAIDs should be used for an extended period of time when an active phase of periodontitis is present.26,27

Ibuprofen is an NSAID that exists in two forms. It is now possible to isolate pure dexibuprofen optically and to make it available for therapeutic applications.28 Administration of the pure dexibuprofen form, either systemically or topically, may reduce undesirable side effects, when compared with the systemic administration of ibuprofen.28 In one study, a locally applied 1.5% dexibuprofen mouthrinse was administered in an attempt to reduce gingivitis.29 While no statistically significant difference existed in the Loe & Silness gingival index recordings in the experimental and control group, a significantly greater Quigley Hein plaque index was found in the placebo group. A similar study using a 0.24% flurbiprofen systemic application was a potent inhibitor of gingival inflammation with both preventive and therapeutic properties. Application of 50 mg bid flurbiprofen to an experimental case of gingivitis caused a significant reduction in bleeding scores, while the control group demonstrated a highly significant increase.26 Paquette et al compared topical ketoprofen gel and systemic ketoprofen used for 15 days in periodontal patients and reported that gingival crevicular fluid PGE2 levels decreased as early as the first and second hours of the first day of drug intake.30 Topical applications of NSAIDs, even if the beneficial effects are primarily caused by systemically absorbed drugs, will not cause gastrointestinal side effects. An additional plaque reducing effect would add further benefit to a preventive and/or therapeutic regimen based on topical NSAID applications.29 This seems to justify further investigation into the effects of topical NSAIDs.

Long-term use of NSAIDs are associated with renal toxicity.31,32 Elderly patients or those with a history of gastric bleeding, renal compromise, or cardiovascular problems should not be prescribed long-term or high-dose NSAIDs.33 Also, NSAIDs do interact with several antihypertensive agents,34 which may compromise blood pressure control. The most common short-term side effects of NSAID usage are dyspepsia, diarrhea, and abdominal pain.35 COX-2 selective inhibitors, such as celecoxib and rofecoxib, have less risk of gastrointestinal (GI) ulceration when compared to nonselective NSAIDs, both having similar GI side effects (abdominal pain, dyspepsial, diarrhea, nausea). Unlike nonselective NSAIDs, COX-2 inhibitors have not demonstrated an effect on platelet function. While COX-2 therapy may reduce the risk of GI ulcerations, recent evidence indicates that COX-2 therapy may not reduce the risk of cardiovascular complications.36

Although the primary etiologic basis for periodontal diseases seems to be bacterial, the host inflammatory response and/or inadequate resolution of inflammation is central to the pathogensis of periodontitis.37 Over-the-counter NSAIDs can be recommended, while prescriptions for others must be dispensed by the dentist or physician. The dental hygienist can recommend these pharmaceutical adjunctive therapies to decrease the level of inflammation and pain association with periodontal procedures. Advising and educating our patients on post-operative hyperalgesia (pain) is a perfect opportunity to recommend drugs that possess anti-inflammatory action as well as analgesic effects.

The Making of a Mouthrinse 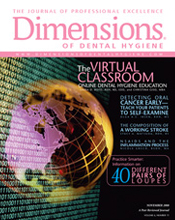