A new study published in the Annals of Internal Medicine found that human papillomavirus (HPV) infection is much more prevalent among men than women.

A new study published in the Annals of Internal Medicine found that human papillomavirus (HPV) infection is much more prevalent among men than women. The results are based on the 2011-2014 National Health and Nutritional Examination Survey in which oral, penile, and vaginal swabs were collected from participants, in addition to answers to a variety of health questions. The survey data revealed that one in nine men were infected with HPV and the overall prevalence of HPV was 11.5% in men compared with 4.2% in women. HPV 16, which is the strain most likely to cause cancer, was six times more common among men than women.

Dimensions’ Editor in Chief Elected to IFDH Board

Dedicated to Doing the Right Thing

Penn to Provide Dental Care for Individuals With Disabilities 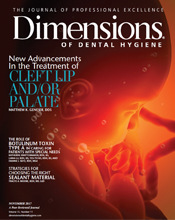