The Safe Use of Radiography in Children

Pediatric patients are more vulnerable to the effects of radiation, so clinicians must be prudent when capturing radiographs in this population.

Because ionizing radiation can cause biological health risks, oral health professionals must be knowledgeable about radiation safety standards.1,2 While the discussion regarding radiation exposure risk is often focused on the medical field, there is ongoing concern regarding possible health hazards posed by low-dose dental radiographs, as they may be prescribed more frequently than medical images. The As Low As Reasonably Achievable (ALARA) radiation safety principle is important for oral health professionals to adopt—and is even more essential when treating pediatric patients because radiation exposure poses a significant risk to developing organs and tissues.3 While radiographs are critical to diagnosing dental disease and for assessing growth and development in pediatric patients, children’s tissues may be at greater risk of ionizing radiation due to their small size, which puts them closer to the primary beam of radiation. In addition, children usually require a decrease in the exposure settings to produce quality radiographic images because their bone structure is not as dense as adults.4

Campaigns focused on reducing children’s radiation exposure have been developed. In 2007, the Alliance for Radiation Safety in Pediatric Imaging started the global Image Gently® campaign to focus on advocacy to improve safe and effective imaging of children.5 Image Gently provides health professionals and patients with education about radiation safety for children. Organizations such as the American Dental Association (ADA), American Dental Hygienists’ Association (ADHA), and the American Academy of Pediatric Dentistry (AAPD) support and promote the Image Gently campaign.1,5 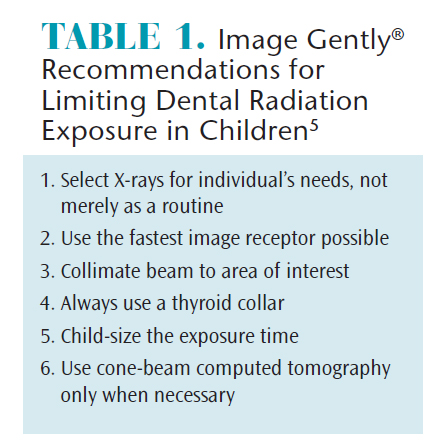 The goal of Image Gently is to promote special considerations for pediatric dental radiography and eliminate unnecessary exposures in children. As such, the campaign utilizes a simple six-step system to increase radiation safety for children (Table 1) and introduces the term, As Low As Diagnostically Achievable (ALADA).5 In recent years, the use of cone-beam computed tomography (CBCT), or three-dimensional imaging, has increased in dental practices. In many cases, CBCT images are being prescribed more frequently than is necessary, which has led to the need for the ALADA principle.5 Oral health professionals can take a pledge on the Image Gently website and print a certificate to display in support of radiation safety guidelines.

Dental hygienists can make preliminary assessments and recommendations for necessary radiographs based on comprehensive clinical examinations and medical and dental histories.4 Evidence-based selection guidelines should be utilized when making decisions about the type, frequency, and quantity of dental radiographs to be taken for adults, adolescents, and children. Revised in 2012 by the ADA, United States Food and Drug Administration, and several dental specialty organizations, the Dental Radiographic Examinations: Recommendations for Patient Selection and Limiting Radiation Exposure should be used when prescribing dental radiographs and when they serve as an aid to limit the number of radiographic exposures. Selection guidelines are incorporated after a complete medical history and thorough clinical examination are conducted.6For children, radiographic frequency depends on several factors, including dentition status, caries risk, and assessment of growth and development.

Dental hygienists can eliminate radiation exposures in children until all primary teeth are fully erupted and inspection of interproximal areas cannot be visualized.4 The only exceptions are if the child has a toothache, presents with growth and development issues, or pathology is suspected.4 After determining what radiographs are diagnostically necessary, dental hygienists should adhere to the ALARA/ALADA principles.2

Position indication devices (PIDs) are currently manufactured as circular or rectangular; however, external rectangular collimators that attach to circular PIDs are available for increased collimation of the X-ray beam. Restricting an X-ray beam size via collimation limits patients’ radiation exposure. Furthermore, rectangular collimation used in dental radiography decreases exposure by five times when compared with circular collimation.9 Many oral health professionals are reluctant to make the change from circular to rectangular collimation because of concerns about an increased chance of centering (cone-cut) errors and the resultant need for retake exposures. Enhanced collimator and image alignment systems are available that convert a circular PID to a rectangular PID and assist in aligning the image receptor to the PID to avoid cone-cut errors. These systems attach to most intraoral dental X-ray machines and can be used with traditional image receptor positioning devices. Research has demonstrated a decrease in centering errors when using enhanced collimator and image alignment systems; however, 35% more radiation was received compared to only using universal collimator devices without image alignment systems.10 Because the radiation exposure reduction is significant, oral health professionals should incorporate rectangular collimation for all patients, especially children. Oral health professionals will need to weigh error reduction (need for retake exposures) and radiation exposure with enhanced collimation devices compared with universal collimators alone.

Less radiation is required for the exposure of dental radiographs in children because tissues and bone structures are less dense when compared to adults.11 In many cases, exposure times should be reduced by one-half of an adult exposure setting for children younger than 10 and by one-fourth for children and adolescents ages 10 to 15.4 Most intraoral and extraoral X-ray machines enable the clinician to preset exposure settings for children and adults (Figure 1). These settings can also be altered to consider the size, density, and dentition of the pediatric patient. The exposure time should also be reduced according to the area being exposed. Anterior images do not need as high exposure factors compared with the posterior region due to the decreased density of teeth and supporting bone in the anterior region.12

CBCT is becoming more common in dental practices and offers improved diagnosis for certain oral conditions. These images expose patients to greater doses of radiation than traditional two-dimensional dental radiology procedures.4 CBCT exposures should only be used when lower-dose techniques, such as two-dimensional intraoral or extraoral radiographs, are not diagnostically acceptable. For children and adolescents, CBCT is considered the standard of care for orthodontic assessment and may offer a similar radiation dose because several two-dimensional extraoral images are necessary for a complete orthodontic examination compared with images obtained with one CBCT scan.1,4,13 To limit radiation exposure for CBCT images, the field of view should be reduced to the area of interest.

The thyroid gland is considered one of the most sensitive tissues to ionizing radiation in children.14,15 Because the thyroid gland is in close proximity to the oral cavity, it is more likely to receive unnecessary exposure to radiation during dental radiographs. Both the ADA and the National Council on Radiation Protection & Measurements recommend thyroid shielding in pediatric patients.15 The use of a lead or lead equivalent thyroid collar can reduce the radiation to this organ significantly for intraoral radiographs and by 50% for CBCT images.16 Lead thyroid collars are contraindicated for use when interference with the exposure is likely, as is the case for extraoral panoramic radiographs and some CBCT images. Therefore, the exposure settings must be kept as low as possible when thyroid shielding is not achievable. To provide maximum protection, clinicians must ensure the thyroid collar is positioned and secured properly. Thyroid collars must completely cover the thyroid gland and be tightly secured around the neck by attaching both ends at the back of the neck and base of the skull. A child-size lead or lead equivalent collar should be used for optimal fit (Figure 2). Ill-fitting thyroid collars will not offer full protection from radiation, making it imperative that lead thyroid collars are correctly sized to the pediatric patient.

To limit the amount of exposures, oral health professionals must avoid the need for retakes due to technique error. The same imaging techniques and principles used in adults can be used in pediatric patients, but may require some modifications. Children may have a small oral cavity, low palatal vault, hypersensitive gag reflex, lack of tongue control, and sensitive oral mucosa due to erupting permanent teeth. A smaller image receptor size and modifications to image receptor positioners may be necessary for the pediatric patient. External aiming devices may be too heavy for children. Adapting the image receptor holders may be necessary, such as using a bitewing tab as a periapical image receptor holding device.4 Additionally, vertical angulation may need to be slightly increased to accommodate image receptors in children with a low palatal vault.4

Pediatric radiographic technique is based on clinical assessment and examination of oral structures. If the paralleling technique cannot be tolerated by a child, the bisecting technique can be considered. Though the images may be more distorted, this technique could still produce reasonably acceptable images for diagnosis and treatment. For either technique, the external aiming rings of image receptor positioning devices should be as close to the patient’s skin as possible, and the PID should be close to the external aiming ring to avoid increased radiation exposure to sensitive organs and tissues. The occlusal technique may be implemented when no other techniques can be tolerated.4

Because of varying levels of cooperation, communication is essential when working with pediatric patients. The clinician must confidently describe the procedure to the child so that he or she knows what is expected. This also encourages cooperation to successfully obtain diagnostic images. The “tell-show-do” technique can be successful when communicating with children. In this method, the clinician shows the child the image receptor and positioners while explaining the procedure before taking radiographs. If implementing the modeling technique, the child can also observe radiographs being taken on another patient, such as the parent or sibling.4 These approaches can reduce the risk of retake errors. If the oral health professional cannot obtain cooperation from the child, it may be necessary to postpone the radiographic assessment until a diagnostic image is achievable. Good judgment on pediatric patients’ cooperation levels is required when assessing the need for dental radiographs and the size and number of images.4

Prevention of dental disease is of utmost importance during childhood because of increased risk for dental caries and faster disease progression.17 All radiographic examinations should be individualized to patient need. The exposure to dental radiographs must have diagnostic benefits that outweigh the risk of radiation exposure for children. Oral health professionals need to incorporate clinical judgment, the prior medical and dental history of the child, intraoral examinations, and selection guidelines when assessing the need for two- or three-dimensional dental radiographs. Using the fastest image receptor possible, rectangular collimation, decreased exposure settings, thyroid shielding, and technique modifications to reduce radiographic imaging errors will significantly lower the amount of ionizing radiation exposure to children.

Ann M. Bruhn, RDH, BSDH, MS, is an associate professor and interim chair of the Gene W. Hirschfeld School of Dental Hygiene at Old Dominion University (ODU) in Norfolk, Virginia. She is a frequent contributor to many peer reviewed journals, has published a textbook, and has written several textbook chapters. Bruhn served as course director for oral radiology from 2010 to 2018, and still teaches radiography lectures and labs. She has received funding to examine innovative strategies for the exposure of high-quality radiographic images on post-mortem remains in mass fatality events. Bruhn is a member of Dimensions of Dental Hygiene’s Peer Review Panel. She can be reached at: [email protected]. 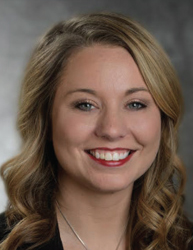 Jessica Suedbeck, RDH, MSDH, is an assistant professor at the Hirschfeld School of Dental Hygiene at Old Dominion University (ODU), where she teaches oral anatomy and histology and clinical care to junior and senior students. Her research focuses on workplace safety and ergonomics. Suedbeck can be reached at: [email protected]

The Role of Fluoride in Caries Prevention

The Bane of Burnished Calculus 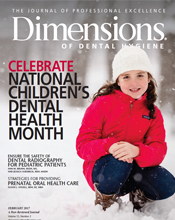