What the research reveals about the etiology, diagnosis, and treatment of this common problem.

By Keerthana Satheesh, DDS, MS On Aug 16, 2012 0
PURCHASE COURSE
This course was published in the August 2012 issue and expires August 31, 2016. The author has no commercial conflicts of interest to disclose. This 2 credit hour self-study activity is electronically mediated.

Many patients experience gingival recession without exhibiting symptoms. However, when any of the following indications is present, treatment should be initiated.

Minimally invasive treatments should always be implemented first. Plaque and calculus should be removed so inflammation is reduced. Patient education in self-care, including the use of a soft toothbrush and proper toothbrushing technique, should also be provided.

A variety of surgical treatments are used to treat gingival recession. Mucogingival surgery includes periodontal surgical procedures designed to correct defects in the morphology, position, and amount of gingiva surrounding the teeth. The goal is to increase the keratinized tissue around teeth and obtain root coverage. The coronally positioned flap technique positions the coronal flap to obtain root coverage. The flap retains its own blood supply, which is a distinct advantage. This surgery is useful when the keratinized gingiva is at least 3 mm wide beyond the area of recession with a gingival thickness of at least 1 mm.6 This procedure is most effective in covering localized Miller’s class I recession defects.

Pedicle grafts develop partial thickness flaps around the involved teeth, sliding the entire flap the width of half a tooth and placing interdental papillary tissues over the buccal surfaces of the affected teeth.7,8 Pedicle flaps also retain their own blood supply. The vascularity nourishes the graft, facilitating the re-establishment of vascular union with the recipient site (Figure 4 and Figure 5). This procedure can be used only if there is an adequate band of keratinized gingiva adjacent to the recession site. Free epithelialized autogenous gingival grafts are not routinely used in root coverage procedures but are mostly done to increase the zone of keratinized gingiva.9 The procedure uses a gingival graft with some connective tissue harvested from the hard palate. Grafts are primarily harvested from the palate, although edentulous areas and attached gingiva can serve as potential donor sites as well. Free gingival grafting has also been used as a single procedure to cover denuded root surfaces.10

Although free gingival grafts are easy to harvest, they have several disadvantages. The involvement of a second surgical site with an open donor site wound can cause significant pain and morbidity. There is also a lack of color match with the surrounding tissue and they heal with a scar-like appearance (Figure 6 to Figure 9). These disadvantages prevent their use in the esthetic zone.

In subepithelial connective tissue autografts, the graft is obtained from a different site within the same individual. The technique elevates a partial thickness flap with two vertical releasing incisions on the recipient site, followed by a placement of the graft harvested from the palate.11 The flap is coronally positioned over the connective tissue graft to obtain double vascular supply (Figure 10 to Figure 12). This technique requires a second surgical site. However, the donor site can be closed, thus creating minimal post-operative discomfort. The subepithelial connective tissue graft is a predictable technique for obtaining root coverage and is considered the “gold standard” procedure in the treatment of Miller’s class I and class II recession defects.12 In connective tissue allografts, the allograft is obtained from human donor dermis, which is then processed so that all of the immune cells that preserve the acellular matrix are removed. A connective tissue allograft can cover multiple recession defects without a second site surgery (Figure 13 to Figure 16). Connective tissue allografts can be used to successfully cover roots and gain keratinized gingiva.13

Guided tissue regeneration (GTR) is one of the newest techniques for addressing gingival recession. Regeneration is a biologic process through which the architecture and function of lost tissues are completely restored. GTR uses a barrier/membrane over the root surface to prevent epithelial downgrowth. The results of GTR for gingival grafting are mixed. Some studies report root coverage of 72%,14 whereas others show root coverage as high as 95%.15 These results, however, are not sustained for a prolonged period. Harris reported that the initial high percentage of root coverage obtained at 6 months post-treatment decreased to 58% after a mean of 25 months post-surgical evaluation.16 Combining different root coverage procedures may increase their success. Wennstorn and Zuchelli combined a coronally positioned flap with a connective tissue graft procedure.17 They treated 103 Miller’s class 1 and class II defects with a 98.9% success rate for the combination approach.

Sutures are typically removed 7 days to 10 days following mucogingival surgery. At the 1 month follow-up, the treated area should demonstrate recession coverage. Gingival healing is evaluated at 3 months and 6 months. The surgical area must not probed until the 3 month post-operative visit to allow for complete healing. Complete root coverage is based on whether the marginal tissue reaches the cemento enamel junction, clinical attachment is present, sulcus depth is 2 mm or less, and bleeding on probing is absent.

There are a number of factors that affect the outcome of root coverage procedures. The dimension of the recession significantly impacts the amount of root coverage that can be obtained. Less favorable outcomes are more common with wide (>3 mm) and deep (>5 mm) recessions. Lack of interproximal bone, as seen in Miller’s class III and IV recessions, can negatively impact root coverage. Smoking and poor oral hygiene also contribute to less than optimal outcomes.

Patients who present with nonprogressing gingival recession without root sensitivity are best treated by informing patients of the issue, providing self-care education, and monitoring the sites. When treatment is indicated, factors that may negatively affect treatment need to be addressed prior to any intervention. Sometimes what clinicians deem as “good” root coverage is not an acceptable esthetic result for the patient.20 Patient expectations must be assessed to ensure they are realistic. Informing patients about the severity of the gingival recession after the initial assessment is completed can help them anticipate the expected treatment outcome. Long-term benefits of gingival recession treatment with grafts include increased root coverage, greater thickness of tissue, and improved resistance to further recession.

Keerthana Satheesh, DDS, MS, is a full-time faculty member at the University of Missouri, Kansas City School of Dentistry, where she chairs the periodontics department. Board certified by the American Board of Periodontology, Satheesh also works in private practice in Overland Park, Kansas. Her accolades include the American Academy of Periodontology's Educator Award, Distinguished Teacher Award, David Moore Teaching Award, and Elmer F. Pierson Excellence in Teaching Award. Satheesh can be reached at [email protected] 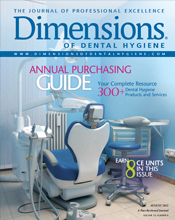