By Paula Gelvez-Petrone, RDH, BS, OMT, Rosalie Forrester, RDH, MS and Isis Marsh, RDH, BSDH On Jul 11, 2022 0
PURCHASE COURSE
This course was published in the July 2022 issue and expires July 2025. The authors have no commercial conflicts of interest to disclose. This 2 credit hour self-study activity is electronically mediated.

Orofacial myology focuses on the anatomy, organization, and function of the mouth and facial muscles. An orofacial myofunctional disorder (OMD) is a dysfunctional pattern of the orofacial musculature that interferes with normal growth, development, or proper function of the orofacial tissues.1 OMDs can impact individuals of any age, and may negatively affect psychological and functional well-being. The relationship between malocclusion and OMDs and their treatment has received significant attention over the past decade, however, uniform assessment protocols are still needed.2

OMDs may develop in conjunction with speech and swallowing difficulties, or they may result from a connection between learned behaviors, sleep disorders, physical and structural characteristics, or genetic and environmental influences.1 Disruptive oral habits are one of the main contributors to OMDs, including thumb or finger sucking, cheek/nail/cuticle biting, teeth clenching/grinding, and tongue, lip, or cheek sucking.3 Use of pacifiers, bottles, or sippy cups over prolonged periods may also contribute to OMD development (Table 1).3 Additional causes are related to structural or physiological abnormalities, such as enlarged tonsils, adenoids, deviated septum, short lingual frenum, and a restricted nasal airway. Neurological disorders, developmental delays, and genetics may also play a role in OMD development.3

Malocclusion is a disturbance of the proper relationship between the maxilla and mandible when they come together in occlusion.4 Facial skeletal abnormalities, which are often associated with malocclusion, influence a variety of orofacial functions, including alterations in the locations of bones, teeth, and muscles. Consequently, chewing processes, speech sound articulation, swallowing, and breathing are altered to accommodate the dentofacial environment.2 Dental and skeletal malocclusion may be inherited or acquired, and are often due to developmental abnormalities.

Edward Angle, MD, DDS, who developed the universally accepted system for describing dental occlusion, believed mouth breathing to be one of the most influential and persistent causes of malocclusion.5 Mouth breathing and poor oral habits are risk factors for malocclusion because they may disrupt the normal balance of growth and function throughout development. Mouth breathing is substantially more connected with occlusal issues, with or without a genetic predisposition. Oral habits, on the other hand, are less relevant in the context of malocclusion unless predisposing contributing factors are present.6

The posterior crossbite is associated with both changed tongue position and speech distortion. The posterior crossbite does not self-correct during tooth development, therefore, early intervention is recommended to allow appropriate growth of the craniofacial structures in order to avoid functional speech impairment and maintain healthy tongue posture.7 A systematic review and meta-analysis conducted revealed that the global prevalence of malocclusion is 56%, with the United States at 53%, suggesting that more than half of the US population have some degree of malocclusion.8

Oral habits are learned behaviors that often begin with a physiological need, such as nasal breathing, stress, or adaptation to anatomical limitations, and then become a default mechanism through repetition.3 Mouth breathing and swallowing are the most common oral habits associated with malocclusion. 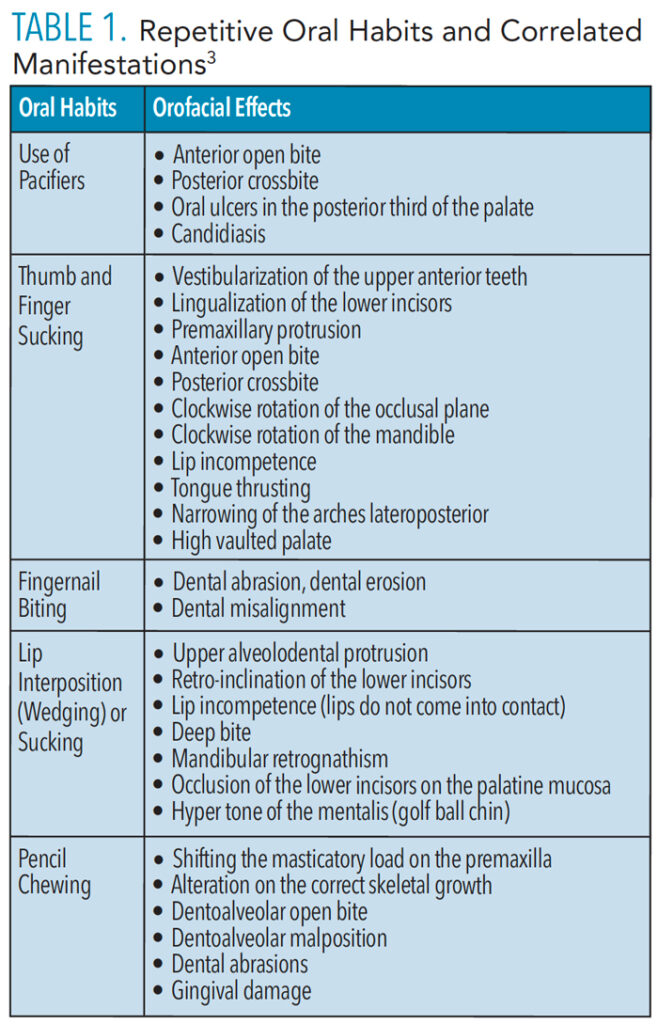 Mouth breathing is a risk factor for malocclusion.6,9 Most commonly occurring during sleep, mouth breathing may be caused by a variety of factors, such as tonsil hypertrophy, septal deviation, nasal polyps, and allergic rhinitis.9 Mouth breathing can cause a broken lip seal, vertical pattern of growth, proclined upper incisors, increased lower facial height, steep mandibular plane angle, and lowering of the chin.10

In most cases, patients with high vertical growth patterns do not self-correct over time.14 These patients present with the most challenging cases for orthodontists to treat because of the skeletal complexity, including the overeruption of teeth due to insufficient occlusal contact.13 Although complete correction may not be attainable, patients should be treated for esthetics and functional improvement. The causes of hyperdivergent growth patterns appear to be environmental due to postural adjustments, particularly forward head posture, related to obstructed airways and weak masticatory musculature (Figure 1).14 Hyperdivergent growth may also increase the risk of developing a Class II malocclusion.14,15

An abnormal swallowing habit usually produces an open bite and may separate not only the anterior teeth but also most of the posterior teeth. If not corrected, the habit will cause the anterior segments to relapse to their former position after the completion of orthodontic treatment. An open bite alone is not always indicative of the abnormal swallowing habit. Interference habits, such as thumb or finger-sucking, lip or nail-biting, and tongue thrusting, can also adversely affect the dentition.18 A tongue thrust swallow involves excessive perioral effort, as the tongue exerts forward and/or puts lateral pressure into the teeth, rather than vertical pressure into the hard palate with a front to back motion, reinforcing a low resting tongue posture.17,19

The action of breastfeeding trains the newborn in many healthy chewing and breathing habits.20 Stimulation of the orofacial muscles is initiated by breastfeeding and continued through mastication.21 The rhythm of sucking to draw milk is a precursor for the rhythm of chewing, as the movement of the masseters, temporalis, and buccinators mimic the act of chewing.20 Breastfeeding also introduces critical connections between the child’s brain and oral habits, as the hypoglossal nerve (cranial nerve XII) powers the tongue to work with deep throat nerves to teach the newborn to swallow, training the airway to be strong and open.21 Furthermore, breastfeeding affects the development of the maxilla and mandible and thus influences dental occlusion.21

Ankyloglossia, or “tongue tie,” is a congenital condition in which a thickened, tightened, or shortened lingual frenulum limits movement of the tongue.22 This condition interferes with feeding, such as mastication, and negatively impacts dental health, sucking, speech, and breathing.23–26 A short lingual frenulum can lead to oral-facial malformations that may decrease the size of the upper airway.23 Lingual frenum restriction can also be a phenotype of obstructive sleep apnea in children,27 as it may increase the possibility of upper airway collapse during sleep.28 Consequently, due to the restrictions that a short lingual frenum places on the muscles and tongue, as well as the impediment placed on bone growth, malocclusion may develop.

Proper surgical release associated with myofunctional therapy can result in increased function and improvement in quality of life. When the tongue rests in its proper position on the palate rather than resting on the floor of the mouth, proper sleep, balance, and posture are supported. Furthermore, when the tongue rests on the palate, the muscles responsible for holding the head up and reducing forward head posture and cervical extension are activated.29

Mastication begins in the first year of life and provides the earliest form of input to the oral sensory system. The deep pressure, or proprioception, provided by chewing contributes to the foundation for normal oral movement needed for speech. Chewing aids in the digestion of food, regulates bone growth, reduces psychological stress, increases cognition,30 and stabilizes the temporomandibular joint.31 Non-nutritive chewing of objects can influence the development of malocclusion and craniofacial changes, leading to imbalanced and inefficient chewing.32 Masseter orientation angle and bite force are correlated to different malocclusions, and softer foods require less chewing and less bite force,33 therefore the drastic evolution of the human diet from harder to softer food may also be a contributory factor.

Additionally, one OMD may contribute to the development of another. Chewing, for example, can be affected by mouth breathing, as mouth breathing has been shown to reduce chewing cycles and chewing stroke count.34 Because mastication and respiration are typically accomplished through different routes and mechanisms, masticatory function must be stopped or interrupted during mouth breathing. This is because when nasal breathing is replaced by mouth breathing, the position of the tongue, lips, and mandible are altered to provide an airway through the mouth, which directly affects the chewing process.10,34

Role of the Dental Hygienist

Though effective and reliable guidelines are few, OMD evaluations must include myriad orofacial functions and rely on a variety of disciplines in order to initiate adequate referrals and care for individuals with OMD.2 Dental hygienists must identify the need for referral, as oral myofunctional therapy is an important part of the multidisciplinary approach to treating patients with orthodontic needs, temporomandibular joint disorder, and sleep-disordered breathing.

A chairside clinical assessment will help dental hygienists recognize the presence of OMDs. When performing a chairside clinical evaluation, patients should remain unaware of the assessment so they are present in their most natural state.35 For example, patients with an inclination toward open mouth posture may intentionally keep their mouth closed during assessment if they are aware they are being evaluated. Effective chairside assessment for potential OMDs consists of extraoral observations and intraoral findings. To attain the most accurate observation during extraoral assessment, the patient’s lips should be in a relaxed position and not pursed or straining to gain closure. Clinicians should take note if the tongue is placed between the teeth and listen for unclear “slushy” sounds when patients are speaking.35 During intraoral assessment, malocclusion, ankyloglossia, current or former oral habits, and palate shape should be noted. Clinicians must be aware that although malocclusion may appear to have been corrected through orthodontics, signs from the extraoral assessment may indicate a possible orthodontic relapse.

OMDs and chronic oral dysfunction can lead to dental malocclusion and related craniofacial dysmorphology. Understanding the underlying pathologies that contribute to malocclusion is vital in achieving long-term facial stability. The goal of orofacial myofunctional therapy is to establish optimal functional relationships between the orofacial muscle complex, temporomandibular joint, myofascial connective tissues, and associated neurological systems, resulting in a balanced, stable, and pain-free homeostatic environment.4 Early detection of OMDs and malocclusion by oral health professionals is imperative in supporting this goal, as thorough assessment and proper diagnosis precede effective treatment. 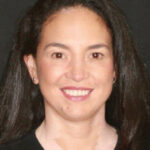 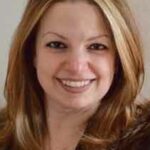 Rosalie Forrester, RDH, MS, has more than 20 years of clinical experience in general dentistry and is an adjunct instructor in the Department of Dental Hygiene at Farmingdale State College in New York. She is the vice president of membership development and engagement of the Long Island Dental Hygienists’ Association. She can be reached at: [email protected]. 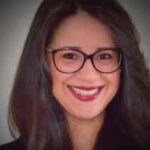 Isis Marsh, RDH, BSDH, has 25 years of clinical experience in general, pediatric, and periodontal practices. She is also an adjunct instructor in the Department of Dental Hygiene at New York City College of Technology and Farmingdale State College. 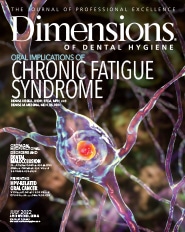