The National Institutes of Health (NIH) is awarding more than $7 million in first-year funding to 10 research grants designed to eliminate inequalities in access to dental care among children.

The National Institutes of Health (NIH) is awarding more than $7 million in first-year funding to 10 research grants designed to eliminate inequalities in access to dental care among children. The awards support the Multidisciplinary and Collaborative Research Consortium to Reduce Oral Health Disparities in Children, a new initiative of NIH’s National Institute of Dental and Craniofacial Research (NIDCR).

The grants are important tools in improving the oral health of children, as each is collecting unique data that will be pooled to draw more widespread, generalizable conclusions. The NIH designed the grants to address barriers to care experienced by certain racial and ethnic groups and children whose families are of low educational and socio economic status. “Research has shown that individual- level approaches alone are not sufficient to reduce rates of tooth decay and other oral diseases,” said NIDCR Health Disparities Research Program Director Ruth Nowjack- Raymer, PhD, RDH, MPH, in a press release. “Therefore, the consortium’s research projects will involve holistic, population health, and other approaches to take decisive action against oral health disparities at multiple levels of influence.” 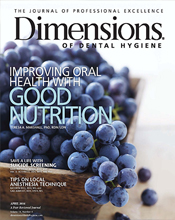