Under SB 103, the state’s Medicaid program will be required to report yearly to Utah’s Health and Human Services Interim Committee on the following:

Dental hygienists may only directly bill and receive compensation for billing codes that fall within the scope of practice of a dental hygienist.

SB103 has been passed by the Utah Senate and has moved to Utah’s House of Representatives for consideration. At press time, the bill was with the Business and Labor Committee. 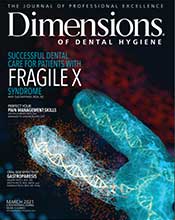