The Use of Periodontal Ligament Injections

Providing effective pain management to patients is key to successful dental treatment. One of the most frequently used local anesthesia injections, the inferior alveolar nerve block, has a disappointing rate of success—from a low of 19% to 22% in refractory conditions,1,2 such as pulpitis, to 80% to 85% on the high end—but periodontal ligament injections can offer a successful alternative.1–4

The inferior alveolar nerve block relies on depositing solution close to the inferior alveolar nerve prior to its entry into the mandibular foramen. Common steps to accomplish this include locating the greatest concavity of the coronoid notch, the internal oblique ridge, and the lateral depression of the pterygomandibular raphe.3–5 By orienting the syringe over the opposite-side premolars at an angle parallel to and 6 mm to 10 mm above the mandibular molar occlusal plane, the needle tip is inserted until it contacts bone directly over the nerve as it enters the mandibular foramen.4,5

When the initial application of the inferior alveolar nerve block is unsuccessful, clinicians often repeat the inferior alveolar block. However, this is often no more reliable than the initial injection, after which profound anesthesia may not be achieved. Even well known and highly regarded alternatives, such as the Gow-Gates nerve block, do not have reported success rates of 100%.

Inferior alveolar nerve block: The low end for this injection has been reported as 19% to 22% in pulpitis, while the high end of 80% to 85% is the average success rate listed in three well-known dental local anesthesia textbooks.3,4,7

Periodontal ligament injections: Injection success rates with this approach are often associated with specific therapies, and have been reported as 58% to 100%—with higher success for periodontal treatment and extractions than for endodontic procedures.

Although local anesthesia failures can be complex and multifaceted, the majority of Inferior alveolar nerve block failures can be described in two ways. The first occurs whenever there is a lack of profound blockade of the inferior alveolar nerve following an initial injection. The second arises when accessory innervation provides at least some sensation to mandibular teeth and structures, even though the initial blockade was successful.

If the first situation occurs, the same or another technique must be used to achieve a successful block. If the second situation arises, supplemental techniques to block the accessory innervation will usually result in profound anesthesia.

There are three distinct tissue types in the oral cavity and their flexibility (compliance) impacts injection rates and pressures.3 Type I low-density tissue is found in buccal mucosa where anesthetic solutions diffuse with minimal pressure. Type II moderate-density tissue is found in less flexible attached gingival and palatal tissues where moderate pressure is required for anesthetic diffusion. Type III high-density tissue is found in the periodontal ligament. In contrast to Type I and Type II, Type III tissues are inflexible and require high pressures for anesthetic diffusion. Due to this inflexibility, solution is primarily forced to diffuse through vascular and nutrient canals in socket bone, instead of the periodontal ligament. Due to the potential for excessive pressures during deposition, periodontal ligament injection rates must be slow. Site selection should include only sites that most easily accommodate flow.

Attempts to force solution through the fenestrations in the dental socket into cancellous bone using excessive pressure can be counterproductive. It might be helpful to visualize the bone surrounding tooth roots as a barrier with pinhole openings. When deposition is firm, steady and slow, solution will move through the pinholes rather than build up outside the barrier. If the pressure is too great—and, even more importantly, if not enough time is allowed for diffusion—excess solution can act as a dam, slowing or even preventing diffusion.

Disregarding tissue compliance and accommodation may not only lead to anesthetic failure, it increases the risk of tissue injury due to hyperpressurized anesthetic solution. Technique-related injuries are easily avoided by adhering to slow deposition rates and applying firm, but not excessive, pressure.3 Selecting an alternate site when solution will not diffuse is preferable to increasing pressure beyond the tolerances of connective tissue. With excessive deposition rates and/or pressures, adverse events, including localized ischemic necrosis and extrusion of teeth, are possible.4

Injection site pain and post-operative discomfort have been characterized as disadvantages6 of periodontal ligament injections, and this approach may not be appropriate for patients who require antibiotic premedication.1 Concern also has arisen regarding injury during periodontal ligament injections to periodontal tissues.1,3 Despite the possibility of reversible tissue injury, it is rarely problematic, especially when established techniques are observed.1,3,25 If injury occurs, it usually manifests as injection site soreness.3,25

Because the volume of solution administered is minimal, adverse systemic reactions are unlikely and rare.6 Unlike some other intraosseous approaches, local anesthetics with epinephrine usually do not result in undesired cardiac stimulation; however, palpitations are possible and a slight increase in heart rate is typical.6 Although more commonly administered with drugs containing dilutions of 1:100,000 epinephrine, using a drug with half the concentration of epinephrine (1:200,000) and injecting slowly can help decrease the potential for undesired cardiac effects. Injections without vasoconstrictors usually have durations so short they often are not clinically useful.3,14,15

A periodontal ligament injection technique using a standard or specialized manual syringe is not recommended for use on primary teeth with underlying or adjacent permanent teeth due to the potential for hypoplastic disturbances of the newly forming teeth.3,6Exceptions may occur when both primary and permanent teeth are to be extracted—for example, as part of an orthodontic treatment plan. Research has suggested periodontal ligament injection techniques using a computer controlled local anesthetic delivery system may not result in injuries to permanent teeth.25 According to the results of one study, computer controlled local anesthetic delivery systems “did not increase the danger of developmental disturbances to the underlying permanent dental bud,” however, excellent alternatives with minimal risk—such as articaine infiltrations—are available.26

Another important aspect of reliably successful periodontal ligament injection techniques is to provide pre-anesthesia prior to needle penetration, which is a useful strategy for all intraosseous techniques.3 When patients express discomfort due to inadequate or no pre-anesthesia at penetration sites, clinicians tend to ease up on the pressure and/or withdraw the needle slightly. Both reflexive actions can undermine successful anesthesia. Sufficient pre-anesthesia may be available from an incomplete inferior alveolar nerve block, which, while not profound enough for pulpal anesthesia, may nevertheless be effective in the surrounding gingiva. Testing with a blunt instrument can determine if a periodontal ligament injection can be administered without additional local anesthesia. In addition to using injection techniques, some topical anesthetics, particularly eutectic mixtures for subgingival application, may provide effective pre-anesthesia.

Short 27-gauge and extra-short 30-gauge needles are recommended. Once pre-anesthesia is confirmed, insert the needle near the line angles through the sulcus, with the needle shaft toward the apex. Orientation of the bevel is not critical, but orientation toward the root can facilitate movement in an apical direction and gouging is less likely.3,4 Advance the tip of the needle into the periodontal ligament between the root surface and alveolar bone. As previously noted, it is important to maintain not only the depth of penetration throughout the injection, but also firm, steady and slow pressure. There is no need to aspirate (the rate of positive aspiration is effectively zero because periodontal ligament tissues lack significant vascularity).

The cardinal signs of ef­fective deposition include circumferential light blanching or ischemia in the attached and marginal gingiva, and no back flow of solution. If blanching does not occur or if there is backflow, it may be necessary to penetrate deeper and try again. If unsuccessful after a second attempt, withdraw and penetrate in an adjacent site. Once blanching is observed in the gingival tissues with no observed backflow, start depositing. When 0.2 ml has been deposited at a site, penetrate into another site that is already blanched. Continue to penetrate around the tooth near the line angles, depositing 0.2 ml over 20 seconds at each site, maintaining the penetration depth and making sure new penetrations are within blanched areas (as much as possible). One to two sites is/are recommended for single-rooted teeth, and three to four for multiple-rooted teeth. The deposition rate is roughly equivalent to one cartridge every 180 seconds (20 seconds per stopper). Depositing volumes greater than 0.2 ml in each site has not been demonstrated to increase success or duration.27

Buffering anesthetic solutions provides some significant benefits, including pain reduction and decreased onset time. A higher concentration of neutral base molecules is available at nerve membranes in buffered solutions, which increases the numbers of anesthetic molecules diffusing into the nerves. This reduces the onset time for profound anesthesia, which benefits both clinicians and patients. A technology is available that enables bicarbonates to be added to dental cartridges without interfering with sterility or adding additional time to the anesthesia administration. A specific volume of solution is replaced by 8.4% sodium bicarbonate (buffering agent) within the mixing pen. Mixing with the local anesthetic solution and administration must be accomplished quickly.28–33

The use of computer controlled local anesthetic delivery technology administers anesthetic solution without manually generated pressures;3 the computer maintains a steady flow of solution, typically equal to one cartridge over a 180-second period or slower. This is three times slower than the recommended maximum rate for most other injections and is the preferred rate for Type III tissues in periodontal ligament injections, regardless of the syringe or device.3 This low pressure and slow rate result in larger volumes of anesthetic delivered. Additionally, due to the lack of pressures beyond the selected periodontal ligament flow rate, pre-anesthesia may not be necessary. 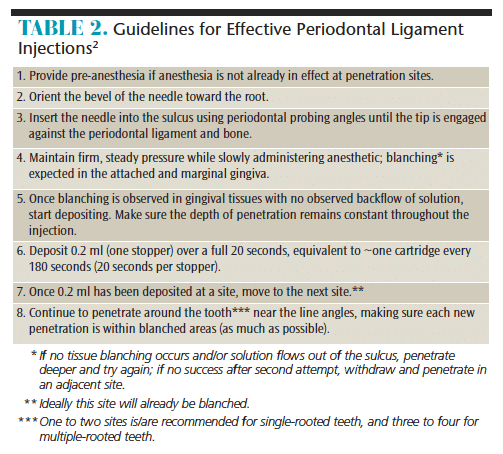 Following successful supplemental periodontal ligament-inferior alveolar approach injections, patients frequently touch their lips and chins and say, “It’s really getting numb now.” The subsequent anesthesia that develops in the lip and chin provides verification that profound inferior alveolar nerve anesthesia has been achieved.3 This approach may be less effective when a significant distance is noted between the apex of the second molar and canal. As a comparison, a greater distance is typically noted between the apices of the first molars and canal. 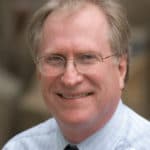 Arthur C. DiMarco, DMD, is director and an affiliate assistant professor in the Regional Initiatives in Dental Education program at the University of Washington School of Dentistry in Spokane. He is also a professor of dental hygiene at Eastern Washington University in Cheney. DiMarco is a coauthor of the textbook Local Anesthesia for Dental Professionals. He can be reached at: [email protected]. 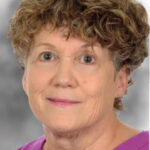 Kathy Bassett, RDH, MEd, is a professor of dental hygiene at Pierce College in Lakewood, Washington, and an affiliate professor in the Department of Oral Health Sciences at the University of Washington School of Dentistry in Seattle. Bassett is a coauthor of Local Anesthesia for Dental Professionals. Bassett is a member of Dimensions of Dental Hygiene’s Editorial Advisory Board.

The Role of the Dental Hygienist in Caries Risk Assessment 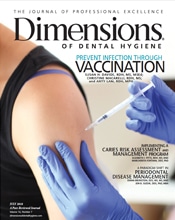