Q. Can periodontal pathogens be eliminated with ultrasonic instrumentation?

A. Completely eradicating oral pathogens from the oral cavity, at this point, is not possible. Sonic or ultrasonic scaling is designed for mechanical disruption of the biofilm and the flushing out of bacteria.

The main issue is whether we can eradicate or eliminate the pathogens at all. Research shows that with the exception of Aggregatibacter actinomycetemcomitans, which is found most frequently in localized aggressive periodontitis, predictable eradication of oral pathogens from the oral cavity doesn’t appear to be possible.1

Q. Does cavitation have a profound effect on pathogens?

A. Khambay and Walmsley3 looked at the efficacy of the ultrasonic scaler with or without water. They found that a greater area was cleaned when water was present compared to operating the ultrasonic scaler under dry conditions. The results indicated that acoustic microstreaming—the flow of water that occurs around the tip of the instrument—may play a role in the disruption of subgingival biofilms. Its effect, however, is limited to the immediate surrounding of the instrument. In order to most effectively remove biofilm in a clinical setting, the tip of the instrument must touch every part of the root surface being debrided. 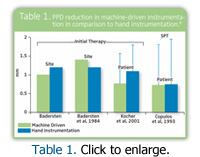 A. Older studies that looked at recolonization focused on the organic weight of bacteria. They found that after 4 to 8 days, the amount of bacteria (the weight) had recolonized.4 More recent studies show that the periodontal pathogens seem to be slower, thus they colonize later.5

The early colonizers, like Streptococcus and Actinomyces species go in first, and the periodontal pathogens come in later. There is a succession of bacteria that favors the nonpathogenic flora. Teles et al6 showed that the risk for disease progression and attachment loss correlates with the quantity of Porphyromonas gingivalis and A. actinomycetemcomitans. Reducing the quantity of bacteria and addressing the slower recolonization of certain bacteria are the main clinical approaches that are currently available.

Q. In the debate between ultrasonic and manual instrumentation, do you believe that one is more effective than the other?

A. Two systematic reviews7,8 looked at the direct comparison. They both concluded that there is no difference in effectiveness between hand and ultrasonic instrumentation in reducing probing depths and signs of gingival inflammation. Machine-driven instrumentation was somewhat more efficient, requiring about 1/3 less time than hand instrumentation.

The skill level of the practitioner performing the debridement has more of an effect on the outcome than which method is used. Calculus is removed primarily to create a good baseline of smooth root surfaces and to create clinical conditions that are maintainable. If a roughness is left on the root surface, it may be more difficult to maintain periodontal health as opposed to starting out with a smooth root surface. The essential part of effective instrumentation is biofilm removal.

Subgingival debridement can reduce up to 90% to 99% of the subgingival bacteria. However, if the skill level of a practitioner is substandard, this may make a difference.

Q. Is biofilm removal effective if calculus or roughness remains on the root? 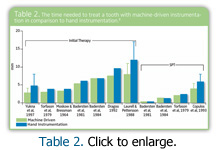 A.It is virtually impossible to completely remove calculus from the root, making this a gray situation as opposed to black and white. There is a distinct correlation between the number of pathogens present subgingivally and the risk for periodontal disease progression. The risk for disease progression increases when the levels of P. gingivalis or A. actinomycetemcomitans exceed a certain threshold. As long as the bacterial counts remain below that level, which may be influenced by various endogenous and exogenous risk factors, the periodontal condition is stable in most cases.

Q. Some clinicians believe that leaving burnished calculus on the roots is not detrimental if you can bring the patient back for ultrasonic low-powered debridement every 3 months to keep the pathogens down. Do you think this is enough to control periodontal disease?

A.I think it is good clinical practice to remove all accessible calculus and not just burnish it. The clinical outcome is what’s important in terms of tissue healing and arresting disease progression; debridement is a means to this end. 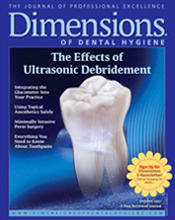