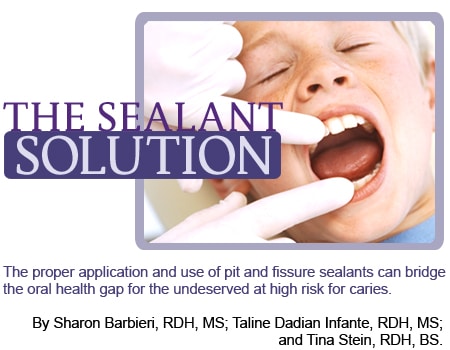 The proper application and use of pit and fissure sealants can bridge the oral health gap for the underserved at high risk for caries.

Pit and fissure sealants have been helping prevent occlusal decay since the first sealant material came on the market in 1976. Sealants have become a key tool in the fight against the caries epidemic in the United States.

2000 Surgeon General’s report Oral Health in America documented the prevalence of dental decay among the nation’s children, including existing disparities among socioeconomic and ethnic groups (see Table 1).1 These findings were further supported by the National Health and Nutrition Examination Survey (NHANES) published in August 2005. The NHANES compared data from 1988-1994 to 1999-2002 and concluded that though the dental caries status of permanent teeth has improved and the number of children receiving sealants has increased, significant dental care disparities continue to exist in our society.2

NHANES also examined the presence of dental sealants in relation to dental caries. Sealant incidence increased 12% during the compared timeline, more frequently in children 12-15 years of age.2 A larger proportion of non-Hispanic white children and higher income families had sealants than Mexican-American or black children and lower income families. Data did suggest the influence of socioeconomic factors may be changing as the proportional increase in sealant prevalence among ethnic minorities was about three times that of non-Hispanic whites and the proportional increase among lower income children was almost twice that of families with higher incomes.2 In an effort to address the health care concerns of our society, we must identify where problems exist and who is most affected. With this knowledge, plans can be implemented to increase access to care and reduce the incidence of dental disease.

Public programs that support the placement of dental sealants are quite successful. Dental sealants are cost efficient and highly effective in preventing dental decay. The Guide to Preventive Services reported a 60% decrease in occlusal tooth decay up to 5 years after sealant application in school-based sealant programs.3 Successful retention is also important as fully retained sealants are 100% effective.4 In an effort to educate policy makers and the public, dental health care professionals must first educate themselves. Which materials have proven superior? What are the most effective methods of sealant placement? How might proper training expand the abilities of dental auxiliaries thereby increasing access to care?

Many products and procedures have been introduced to enhance sealant placement. Over the years, techniques have been studied and modified to improve retention. Specific areas addressed include alternative systems for cleaning the tooth surface, the etching process, consistency and color of materials, and ease of use.

The first step to sealant placement is a clean tooth surface. Although air polishing is not widely accepted as a standard of care, it does increase the depth of penetration of the sealant resin.5 Additionally, brushing without toothpaste is an acceptable alternative for cleaning the tooth surface prior to sealant placement.6 Because sealants are placed largely by public health programs, this technique is important.

Preparation of the cleansed surface using acid etch is a critical step with traditional sealant materials. Etching opens the enamel tubules, allowing a stronger mechanical bond between the sealant material and the tooth. A conventional method of etching prior to sealant placement includes the use of a 35% to 37% solution of orthophosphoric acid for 60 seconds. A decreased etching time of 15 to 20 seconds for permanent or primary teeth is comparable to the conventional 60 second etch.7 No marked differences exist in retention between liquid or gel etch.

The literature indicates that fluoride use prior to sealant placement does not affect retention. Furthermore, the advantages of placing sealants after a topical fluoride application are supported. If a sealant is lost after placement, the tooth underneath will benefit from fluoride compared to an untreated tooth.9, 10

In 1973, Handelman conducted a study to determine if sealant placement over incipient lesions was harmful. Preliminary clinic and radiographic findings suggest the caries lesion did not progress.11 This premise is accepted in the dental community and careful selection of sealant sites is encouraged (Table 2).

A well-trained auxiliary is widely accepted as equally skilled in applying pit and fissure sealants as a dentist. A 10-year retrospective study comparing the longevity of sealants placed by dentists, hygienists, and assistants found that all operators are effective in applying sealants.13 In fact, the ADA 2004 Survey of Legal Provisions for Delegating Intraoral Functions to Dental Assistants and Dental Hygienists indicates that at least 33 states within the United States legally allow dental hygienists to place pit and fissure sealants while about 50% of the United States permits dental assistants.14

However, sealant usage is still limited. The literature reveals that only 15% of children ages 6 to 17 have dental sealants. Lack of insurance coverage is identified as the major barrier to patients receiving this service. The risk of inappropriate use or abuse is a concern with adding sealant coverage to third party dental programs.15

However, educating the public, dental professionals, and policy makers on the economic benefits of pit and fissure sealants is a means of changing this perception. Effective marketing strategies to promote the benefits of pit and fissure sealant placement to the public is another method of changing attitudes toward accepting these materials. Professional organizations and governmental agencies are influential to guide and provide leadership in this arena.

As dental health care providers, we must raise awareness and improve health literacy of the public and policy makers. Oral health must be considered as important as other health needs. The efficacy and efficiency of sealant placement to prevent dental decay and promote oral health are well proven. Educating practitioners and patients about the economic and physiologic benefits of sealants is a crucial step in expanding the acceptance and use of this preventive health care measure.

Tina Stein, RDH, BS, is a clinical instructor in the Department of Dental Hygiene at UTHSCSA. She has 17 years of private practice experience and 7 years in education. Currently, she is the clinic coordinator and course instructor for the second year dental hygiene students. Stein speaks nationally and locally on topics including piercing and dental materials.

Taline Dadian Infante, RDH, MS, is an associate professor in the Department of Dental Hygiene at UTHSCSA. As a clinician, she has practiced dental hygiene in the United States, Switzerland, France, and South Africa. Dadian Infante is the director of Dental Hygiene Continuing Education. Her research interests include effective instructional educational course and curriculum design.

The Importance of Saliva 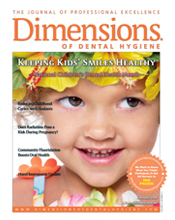