The Role of Nicotine in Caries Risk and Development

Research demonstrates a direct relationship between smoking and Streptococcus mutans biofilm formation that raises the risk for dental caries.

Dental caries is a common infectious disease that affects all ages. Despite improvements in oral health, dental caries continues to be a major health issue globally and in the United States. According to the 2011–2012 National Health and Nutrition Examination Survey, 14% of children ages 6 to 11; 29% of children ages 9 to 11; 58% of adolescents ages 12 to 19; and 67% of adolescents ages 16 to 19 had untreated dental caries.1 The US Centers for Disease Control and Prevention (CDC) also reported that 27.4% of adults ages 20 to 44 had untreated dental caries during the same timeframe.2

Smoking is also a global and national health problem and is one of the most significant health risks that impacts all age groups.3Much research has been conducted on the association between dental caries and smoking.4 A cross-sectional study in an Italian military academy was conducted in smokers and nonsmokers. Results showed that there was a significant direct relationship between smoking and caries severity.5 A growing number of studies indicate that nicotine—which is an alkaloid component of tobacco—is a major contributor to dental caries. Our laboratory at the Indiana University School of Dentistry has demonstrated that nicotine stimulates biofilm formation and metabolic activity of oral pathogens, such as Streptococcus mutans, a Gram-positive oral bacterium.4 As a result, this stimulation increases S. mutans biofilm formation and metabolism of sucrose into lactic acid, consequently contributing to dental caries.

Not only do cariogenic bacteria impact caries development but so does the nicotine in tobacco. As mentioned above, dental caries is significantly associated with smokers, and multiple studies have documented this observation. A 2013 study was conducted in Japan where clinical data of smokers and nonsmokers from 753 clinics concluded that patients who smoked had significantly more treatment procedures than nonsmokers.6 Another cross-sectional study was conducted among patients at a dental teaching clinic in Irbid, Jordan, to determine the relationship between caries and smoking.7 Plaque and decayed, missing, and filled teeth (DMFT) data were collected from smokers and nonsmokers. They found that plaque and DMFT scores were significantly higher in smokers than nonsmokers. Additionally, the association between smoking and dental caries was examined in professional truck drivers, with results indicating a direct relationship between the number of caries lesions and the number of cigarettes smoked per day.8 As the number of cigarettes increased from one to three cigarettes/day to more than or equal to 10 cigarettes/day, the larger the number of lesions that were present. All of these studies concurred that smoking increases caries risk.

MICROBIAL ETIOLOGY OF CARIES AND VIRULENCE

Caries results from the interactions between cariogenic bacteria, diet, and enamel and dentin tooth surfaces. These interactions cause the bacteria to release acidic by-products and, as a result, these acids degrade the hard tissues of teeth.9 If left untreated, the progression of the caries lesion has the potential to reach the pulp, which can cause severe pain.10

Cariogenic bacteria—such as S. mutans that colonize the hard surfaces of the oral cavity—play a significant role in plaque formation and dental caries development.10 For example, S. mutans competes with other oral bacteria to adhere to the tooth surface, eventually forming biofilm composed of approximately 40% cells and 60% extracellular polysaccharide (EPS).10 Biofilm is initiated by the initial reversible adhesion of bacteria, and the biofilm mass grows as bacteria multiply.11 Additionally, biofilm induces bacteria of the same or different species to attach to the existing biofilm or to the tooth surface, eventually creating a multispecies oral biofilm.11In addition to biofilm formation, S. mutans is extremely aciduric and acidogenic. It produces organic acids, primarily lactic acid, which destroys the enamel by demineralization.12

While a clear explanation of why smoking increases the risk for dental caries is not yet known, multiple studies have examined the effect of nicotine on the biofilm formation of oral pathogens, such as S. mutans. A 2011 study by Huang et al10 examined the minimum biofilm inhibitory concentration of nicotine on S. mutans. Seven strains of S. mutans were isolated from patients with severe caries and treated with 0 mg/mL to 32.0 mg/mL of nicotine in 96 well microtiter plates for 24 hours, followed by crystal violet staining of the biofilm cells and measurement of the absorbance. The results indicated an increase in biofilm formation of all seven strains of S. mutans in a dose-dependent manner of nicotine up to 16 mg/mL.

Gram-positive bacteria, such as S. mutans, use a transpeptidase called sortase to anchor cell surface proteins that contain an LPXTGX amino acid motif onto the bacterial cell wall.14 This process occurs through peptidyl bond cleavage between threonine and glycine amino acids of the LPXTGX motif and anchors them to the bacterial cell wall. S. mutans has six cell surface proteins that contain an LPXTGX motif at their C terminus. A 2013 study by Li et al14 examined the effect of nicotine on sortase in S. mutans, and the results proved that the expression of sucrose-dependent genes, such as sortase A, was enhanced by nicotine. This means that the activity of sortase to anchor these six proteins to the cell wall was upregulated by nicotine. This study also compared a wildtype strain of S. mutans with a sortase-defective strain and demonstrated that the sortase-defective strain produced less biofilm than the wildtype strain when both strains were treated with nicotine. These sortase-anchored proteins are required to bind to the salivary pellicle on the tooth surface. Therefore, nonfunctional sortase resulted in less binding to the tooth surface and reduced biofilm formation.

Follow-up studies demonstrated that nicotine stimulates expression of several critical S. mutans virulence markers and lactic acid synthesis, and significantly increases the virulence of the organism. Huang et al4 examined the sucrose-dependent stage of S. mutans attachment to assess the effect of nicotine on GTF and glucan-binding proteins. A Western blotting assay was used to examine the expression of GTF and glucan-binding proteins in nicotine-treated S. mutans cells. Also, a lactate dehydrogenase (LDH) assay was used to measure LDH activity. LDH is a critical enzyme in the metabolism of sucrose into lactic acid. The study concluded that nicotine upregulates expression of GTF, total amount of LDH, and glucan-binding genes and proteins of S. mutans planktonic cells, which ultimately contributes to an increase in biofilm cell number and increased lactic acid.

To summarize, the presence of nicotine induces expression of antigen I/II, GTF, glucan-binding proteins, sortase, LDH, lactic acid production, and metabolic activity in S. mutans, which significantly increases biofilm formation and, ultimately, dental caries risk. Therefore, smoking can lead to an increase in caries due to its enhancing of S. mutans biofilm formation.

Clinical studies conducted in various parts of the world demonstrate that an increase in carious lesions was associated with increased tobacco smoking. In addition, microbiological studies explain cariogenic oral bacterial growth is stimulated by nicotine. Additionally, when S. mutans biofilm grows with increased amounts of nicotine, lactic acid production is increased, which ultimately causes demineralization of the enamel. This direct relationship between smoking and S. mutans biofilm formation explains the potential risk smokers have for increased dental caries. In conclusion, dental caries development is stimulated by the presence of nicotine, which upregulates the metabolic activity and biofilm formation of the cariogenic bacterium, S. mutans.

Featured photo by EBOLYUKH/ISTOCK/GETTY IMAGES PLUS

Youstina S. Beshay, BS, is a predental student at Indiana University-Purdue University Indianapolis. Her main research interest is the effect of nicotine on biofilm formation of oral bacteria. She presented her research at the 2017 International Association for Dental Research Annual Meeting in San Francisco.

Richard L. Gregory, PhD, is a professor of biomedical and applied sciences, pathology, and laboratory medicine; adjunct professor of preventive and community dentistry; director of the PhD dental science program; director of student research programs, and associate dean for graduate education at Indiana University School of Dentistry (IUSD) in Indianapolis. He received the IUSD Outstanding Faculty Member of the Year award in 2003. Gregoryês research interests include the effect of tobacco on mucosal biology, efficacy of antimicrobial compounds, and the microbiome of the respiratory tract. 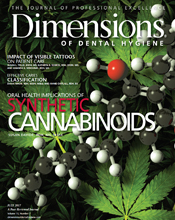