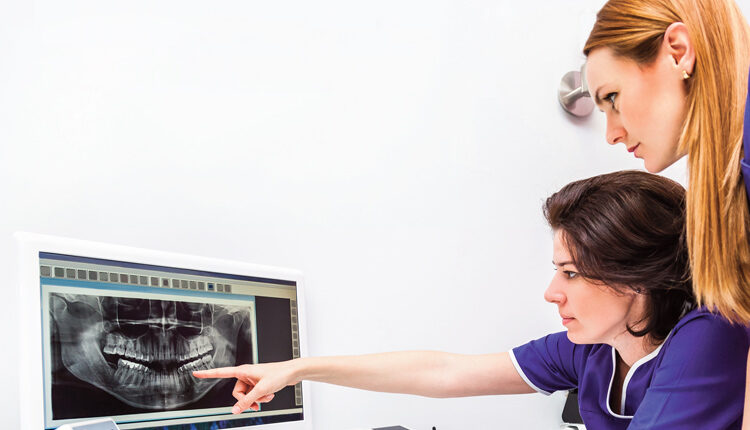 Helping patients overcome their apprehension regarding Intraoral imaging may increase compliance with this important diagnostic tool.

Dental hygienists are well aware of the benefits of dental radiography, which is key to proper diagnosis and treatment. While imaging enables clinicians to evaluate periodontal health and identify caries lesions, they are also valuable in observing orthodontia and anatomical abnormalities, and even identifying certain types of cancers.1 However, some patients may be wary of dental radiography due to the inherent risks involved in radiation exposure. While film-based dental radiography exposed patients to higher levels of radiation, advances in radiographic equipment and technology led to digital imaging, which significantly reduces patients’ exposure to radiation.1 Dental hygienists are well positioned to educate patients on safety precautions, benefits vs risks, and other sources of radiation exposure they may unknowingly receive through their daily routine.

Dental radiographs are categorized into types such as intraoral and extraoral, analogue and digital, and two-dimensional and three-dimensional imaging. Traditional film-based dental radiography has been around since the 19th century.1–3 This technology has been widely used in dental settings for routine and emergent care, however, film-based radiography exposes patients and clinicians alike to higher levels of radiation than digital imaging.1,2 Other downsides to film-based radiography are the need for additional equipment and space; use of toxic chemical agents to process radiographs; longer wait times for developing; and increased risk for errors and thus retakes, which equates to higher levels of radiation exposure.1–3 Today, digital imaging is preferred over film-based radiography.

Digital dental radiography was first introduced in 1987.3,4 Digital radiographs use advanced image-capturing techniques integrated with computer technology. Offering myriad benefits, digital radiography enables the images to be immediately viewed on the computer screen and drastically decreases the need for retakes, thus, reducing radiation exposure. Clinicians are also able to improve the quality of a digital image to support proper diagnosis. Digital radiography reduces the need for chemical agents and minimizes waste caused by single-use films. Finally, it can improve productivity, as digital image acquisition is significantly faster than film-based techniques.3–6

Portable handheld Xray devices have been used in veterinary, military, and forensic dentistry since the early 1990s. These handheld devices were not originally intended to replace fixed or wall-mounted systems, but rather were designed for use outside of traditional medical/​dental practices. However, their ease of use has increased their popularity.3–5 The use of handheld Xray devices is helpful when treating patients who are unable to visit a traditional dental office, such as those residing in long-term care facilities. Additionally, they are widely used in teledentistry applications. The portable handheld device is also beneficial for small spaces, as wall-mounted units require a large space for installation.6,7

The use of handheld devices has raised concerns about the proximity of the clinician and possible increase in radiation exposure.6,7 However, research shows they do not expose clinicians or patients to a significantly higher amount of radiation when compared to traditional wall-mounted units.4–6 The exposure parameters between handheld and wall-mounted radiography are similar (Table 1). Several protective mechanisms are in place to ensure clinician safety, such as shielding placed around the tube to reduce and retain scatter radiation.6,7 Clinicians should also follow the manufacturer’s recommended safety protocols, such as proper angulation of the device, appropriate use of the shields, and limiting retakes.

All dental exposures—even those created with the newest digital equipment—pose a risk due to the emission of radiation. To address this risk, regulations have been established to promote safety in radiography. The most significant safety principle is ALARA, or “as low as reasonably achievable.”8–10 The ALARA principle states that if the dose of radiation required by radiography offers no benefit to the patient, it should not be used. Three basic measures are used in ALARA:8–10

Comparison of radiation exposures in everyday use

Patients may perceive radiographs as harmful or dangerous, but they may lack knowledge regarding their exposure to radiation on a daily basis through innocuous activities such as flying on an airplane, engaging with smartphones, being inside of homes and buildings, using tobacco, and tanning.8–10

Radiation exposure related to air travel begins upon entering the airport. The security screening requires body scanning, which emits radiation. Air travel itself exposes individuals to about 0.035 mSv of cosmic radiation when flying within the United States from the East Coast to the West Coast.11,12

The use of cellphones, ipads, and other portable technology devices is ubiquitous today. These devices use low-powered radiofrequency transmitters to send and receive data. The American Cancer Society suggests that the amount of time used, distance the device is held away from the body, and the space between the device and the cellphone tower impact the amount of radiation emitted.8,9,11,13

Building material—such as sandstone, concrete, brick, natural stone, gypsum, and granite—produce low levels of nonionizing radiation. The radioactive elements radium, uranium, and thorium are often found in building materials and, over time, may release toxic fumes such as radon.11,12 The levels of radiation exposure may vary based on the type and the number of building materials used in the construction. The US Environmental Protection Agency recommends that individuals test their homes for radon so they can mitigate the amount of exposure if necessary.8,9,11,12

Tobacco use is also linked to radiation exposure.11,12 Radioactive materials, such as polonium-210 and lead-210, are found in the fertilizers used in the growing of tobacco leaves. Even after the tobacco leaves are processed, these radioactive materials remain and are toxic to the individuals who inhale them.8,9,11 Oral health professionals are in a unique position to educate patients on different types of tobacco cessation techniques as well as to discuss other negative effects of radiation exposure related to tobacco products.

Exposure to ultraviolet (UV) radiation is another concern.11–14 The use of tanning beds as well as sunbathing increase the possibility of radiation overexposure and harmful effects such as aging, sunburn, and skin cancer. In order to reduce UV radiation, exposed areas should be covered when in the sun and sunscreen of 30 SPF or higher should be applied.8,9,11,14 While these topics may not appear to be directly related to dental hygiene care, they are life-saving educational conversations that should be incorporated into the appointment.

Radiographs are a valuable aspect of comprehensive dental care. By following ALARA protocols along with improved technology, oral health professionals can play an important role in promoting increased awareness and education regarding the benefits of diagnostic radiography.8–10 Acknowledging patients’ apprehension regarding intraoral imaging and educating them on radiation exposures may increase compliance in obtaining the necessary radiographs to improve oral and overall health, reduce everyday radiation exposure, and clarify common misconceptions of dental radiation effects. 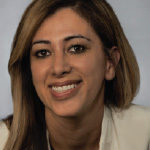 Victoria Benvenuto, RDH, EdM, is a clinical assistant professor in the Department of Dental Hygiene and Dental Assisting at New York University College of Dentistry (NYUCD). She is the dental hygiene clinical academic coordinator and the course director for periodontics and clinic for second-year dental hygiene students. 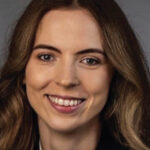 Olga Gnatovych, RDH, MEd, is a preclinical and clinical instructor in the Department of Dental Hygiene and Dental Assisting at NYUCD. She mainly works with first-year dental hygiene students on the development of professional and practical skills in the treatment of patients.

Kaitlin Stier, RDH, MPH, is a clinical assistant professor in the Department of Dental Hygiene and Dental Assisting at NYUCD. She serves as the dental hygiene group practice clinic coordinator and the clinic course director for first-year dental hygiene students, preventive dentistry and public health, and oral health education.

Importance of Micronutrients in Both Systemic and Oral Health

Interest in Teledentistry Continues to Grow 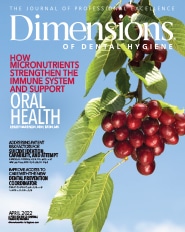