The Battle Against Biofilms Continues

In this informative Q&A, Rebecca Wilder, RDH, MS, discusses the role of antimicrobials in the reduction of dental biofilms.

The evolution of what is known about the pathophysiology of dental biofilms and how they proliferate has changed the way periodontal diseases are treated. The mechanical removal of these complex groups of bacteria that cling to the tooth surface is one way to effectively address biofilm, but what about the role of antimicrobials? In this interview with Dimensions of Dental Hygiene, Rebecca Wilder, RDH, MS—a highly regarded educator, investigator, and author—shares her insights on this important question, and what the future may hold in the fight against dental biofilms.

What are some of the most recent discoveries in the science of biofilm?

Teles et al1 recently published a comprehensive article in Periodontology 2000 that reviewed several aspects of biofilm research. For example, molecular technology has enabled the analysis of samples that cannot be cultured, which has expanded the knowledge base regarding supragingival and subgingival microbiotas. The role of culturing oral biofilm, however, remains important.2 Although not a recent discovery, we know that it is dental biofilms—not the bacteria in a planktonic state (single-cell bacteria)—that cause disease. This fact, however, does not explain why one patient’s disease progresses while another’s does not. The immune-inflammatory host response has to be in place for tissue destruction to occur. Additional investigations have studied the role of environmental conditions—such as temperature, osmotic pressure, pH, and the availability of nutrients—on patterns of gene expression and the impact on the pathogenic effect of bacterial strains.3,4

As scientific discovery uncovers new information about the biomechanics of dental biofilms, will new ways to combat them be revealed?

Several evidence-based methods currently exist to combat dental biofilms, in addition to mechanical disruption through brushing and interdental cleaning. The use of antimicrobial mouthrinses can be effective in reducing supragingival plaque and gingivitis. The rinses most widely investigated for these purposes are chlorhexidine (CHX), essential oils (EO), and cetylpyridinium chloride (CPC). While these mouthrinses are not new, it is important for clinicians to stay up-to-date regarding the evidence supporting their use. One way to accomplish this is to read systematic reviews on select topics, such as antimicrobials. Systematic reviews access and evaluate all research studies that address a particular clinical question. In the past few years, systematic reviews have been conducted to evaluate the evidence surrounding antimicrobial mouthrinses.

Other products have been developed in recent years to interfere with the formation of plaque biofilms, which will be discussed later.

What effects do various antimicrobial agents have on biofilm development and adhesion?

It can be challenging for mouthrinses to completely eliminate oral biofilms. Clinicians should always reinforce mechanical removal of plaque biofilms, followed by the use of an adjunctive antimicrobial agent. Table 1 lists the most frequently used antimicrobial agents and their effects on biofilm development and adhesion.7,8 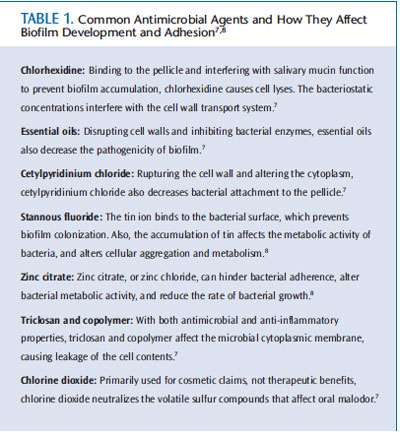 Can the adhesion of biofilm be prevented or minimized in the first place?

New products have been introduced to assist with the prevention of biofilm development and adhesion. A delmopinol hydrochloride mouthrinse is now available in the United States to reduce plaque and alleviate gingivitis. Studied in Europe for many years, delmopinol hydrochloride is approved by the US Food and Drug Administration as a mechanical device. It works by inhibiting or disrupting the formation of the polysaccharide in biofilm, reducing the adherence of the primary plaque-forming bacteria (but not killing it).9 Randomized, controlled clinical trials showed that delmopinol hydrochloride performed significantly better than a placebo with plaque reduction, bleeding on probing, and gingivitis.9 The rinse also has a low alcohol content (1.5%).

How might the use of oral probiotics help in the control of dental biofilms? 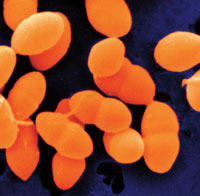 Probiotics are bacteria with beneficial effects for humans and animals.10 The interest in the use of probiotics has increased in recent years, as evidenced by the growing number of publications on the topic. While probiotics have been established for their use with gastrointestinal diseases, their effectiveness for oral use is still under consideration and study. Teughels et al10 reported on a review that analyzed whether the use of probiotics influences the periodontal microbiota. They found that the data suggest probiotics may offer opportunities to improve the oral microflora and, ultimately, periodontal health. Studies to date, however, have several limitations that hinder definitive conclusions. A systematic review conducted by Yanine et al11 sought to determine the effects of probiotics in prevention and/or treatment of periodontal diseases. They found four randomized clinical trials that compared probiotics to a placebo or another intervention to prevent or treat periodontal diseases in adult patients. Probiotics showed small benefits on plaque index and gingival inflammation. Though promising, additional research is needed to demonstrate the benefit of oral probiotics for periodontal diseases, as well as their long-term effects.

What else is on the horizon for control of oral biofilm and gingival health?

Antioxidants are being investigated for their use in treating several conditions, including periodontal diseases. Studies report a correlation between high inflammation and oxidative stress markers and low levels of naturally occurring salivary antioxidants. For example, Sculley and Langley-Evans12 reported that periodontitis is associated with low salivary antioxidant status and increased oxidative damage within the oral cavity. A specific group of antioxidants (polyphenols) has been shown to neutralize free radical activity,13 proliferate fibroblasts,14 and increase wound healing.15 By delivering the antioxidants locally, they work in concert with the naturally occurring salivary antioxidants.16 Polyphenols in the mouth have the ability, due to their chemical structure, to “stick” to oral cells, creating a time-release effect.16 Newly introduced products have the ability to be immediately absorbed into the oral cavity. Initial studies are promising, though more research is needed to provide evidence for therapeutic use. 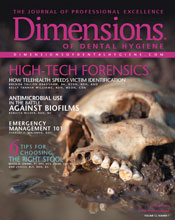