Products that aid in the remineralization process should be considered as part of an overall caries prevention and management plan for at-risk patients.

Dental caries is a multifactorial disease where the enamel layer of the tooth becomes demineralized. If the deminerali­zation process is not interrupted and reversed, a carious lesion forms, leading to the exposure of less mineralized and permeable dentin.1,2 It is well established that dental caries disease is a transmissible, infectious, and preventable oral infection.3–5 Dental caries remains the most prevalent chronic disease among children in the United States. Nineteen percent of Americans ages 2 to 6, and 22.6% of Americans ages 6 to 19 have untreated dental caries.6 Globally, untreated dental caries is the tenth most prevalent chronic infection and it affects approximately 9% of the world’s population with deciduous teeth and 35% of those with permanent dentition.7 The FDI Dental World Federation defines oral health as, “the ability to speak, smile, smell, taste, touch, chew, swallow, and convey a range of emotions through facial expressions with confidence and without pain, discomfort, and disease of the craniofacial complex.”8 If left untreated, dental caries can significantly impact quality of life.1,9

Oral health professionals are always searching for new therapies or technologies to reverse demineralization or boost remineralization. Scientific evidence has shown that when introduced into the saliva and/or oral biofilm, fluoride will remineralize areas of demineralized enamel, preventing new and reversing existing carious lesions.10 In recent decades, oral care products that may help enhance the bioavailability of the fluoride needed during the remineralization process have become available, both over-the-counter and through professional application or prescription.

Fluoride plays a substantial role in the enamel remineralization process. As the oral pH drops below the critical level of 5.5, calcium and phosphate are removed from the enamel’s hydroxyapatite into the surrounding saliva. The loss of minerals from the enamel causes demineralization and become susceptible to cariogenic bacteria.11 When fluoride is introduced into the saliva through salivary secretions or through topical products, it acts as a catalyst in the remineralization process.11 Research shows a direct, linear relationship exists between the amount of fluoride and calcium exposure and the incidence of dental caries. In the saliva, calcium and phosphate ions are naturally occurring, and they help to reduce the solubility and enhance the remineralization of enamel.12

The conversion of the fluoride ions and the existing hydroxyapatite creates a hardened outer layer on the tooth, called fluorapatite. Fluorapatite is then layered on the enamel surface and fills in demineralized enamel.11 The availability of calcium, phosphate, and fluoride in the saliva and salivary secretions can be either a protective or destructive factor for overall tooth remineralization.13

Fluoride, calcium, and phosphate must be introduced into the saliva through external sources for patients at high or extremely high risk of caries and/or xerostomia, as their salivary secretions are impaired. Today, several over-the-counter, prescription, and professionally applied products are available to help enhance the bioavailability of fluoride through the topical introduction of calcium and phosphate, improving the quality of enamel remineralization.

Amorphous calcium phosphate (ACP) was first developed in the mid-1960s but was not used in dentistry until 1991 when it was reintroduced by the American Dental Association’s (ADA) Paffenbarger Research Center.14 ACP is a component of natural teeth and bone, and is the same material found in hydroxyapatite.15 When introduced into an aqueous environment, the conversion of ACP to crystalline calcium phosphate is quick and unstable. Therefore, the calcium and phosphate are often delivered intraorally as a two-phase delivery system to ensure the reaction between calcium, phosphate, and fluoride takes place at the tooth surface and not before.16,17 Once combined at the tooth surface, the ACP converts to apatite, filling in microscopic surface defects and porosities.

ACP can be found in several dental products, including dentifrice; fluoride varnish; prophy paste; fluoride gels; whitening agents; desensitizing agents; and sealant, bonding, and composite materials.16 In toothpaste, the ACP combines with fluoride and enhances remineralization by being incorporated into the dentin through a strong impermeable bond.14 ACP is also found as a filler in some bioactive polymeric composites, as it may stimulate the repair of tooth structure due to the sustained release of calcium and phosphate into the prepared tooth surface and surrounding biofilm.15

ACP found in orthodontic bonding cements may help reduce demineralization that occurs around the orthodontic brackets of patients with poor oral hygiene.18 When ACP is added to professional prophy paste, the calcium and phosphate may be incorporated into the tooth surface, helping to defend against the acid challenge.18,19 Additionally, ACP has been added to whitening agents to decrease tooth sensitivity.20 A 2007 study, however, found little difference in the effectiveness of products with ACP vs those with potassium nitrate in treating post-whitening sensitivity.21

Casein phosphopeptides-ACP (CPP-ACP) uses a stabilized form of ACP. The casein phosphopeptides (CPP), which acts as the delivery method to co-localize bioavailable calcium, fluoride, and phosphate at the tooth surface, stabilizes this form of ACP.16,22 The CPP-ACP technology has demonstrated in laboratory and randomized, controlled clinical trials that is has an anticariogenic effect at the tooth surface and within the biofilm.22 CPP-ACP is available over-the-counter, as a professional application, and through prescription. CPP-ACP can be found in dentifrice, fluoride varnish, and chewing gum.

To date, this technology has clinically demonstrated an ability to aid in the remineralization of root caries, subsurface enamel lesions, and create a surface that is more resistant to an acid challenge.22 The most popular CPP-ACP product is a toothpaste containing 900 ppm fluoride. This product has shown to improve the appearance of existing white spot lesions.23,24

A newer calcium/phosphate remineralizing agent is found in products containing 8.0% or 1.5% arginine combined with 1,450 ppm fluoride. Arginine is an insoluble calcium compound that occurs naturally in food and salivary gland secretions.25,26 In the mouth, arginine contributes to pH neutralization and oral homeostasis. Studies have reported that individuals who present as being “caries free” naturally have higher levels of arginine in their saliva compared with individuals who are “caries active.”Arginine favors arginolytic bacteria that have the ability to moderate the pH response, thus creating a shift in the oral flora from a cariogenic environment to a noncariogenic environment.27 Early reports show benefits to adding arginine to fluoride dentifrice in invitro settings, but clinical significance has not yet been demonstrated.25–29 Products containing arginine can be found over the counter as toothpaste and soft chews supplements and professionally as prophy paste.

Calcium sodium phosphosilicate (CSP) or Novamin was developed in the late 1960s to help regrow bone. The technology is a bioactive glass containing CSP. When exposed to the aqueous oral environment, the CSP experiences a surface reaction. This surface reaction allows for the CSP to cling to the exposed dentin surfaces, occluding the dentinal tubules.30,31 During this exchange, there is a temporary increase in pH, validating reports that CSP increases the saliva’s pH buffering ability.32

This product was originally developed for dentinal hypersensitivity. However, several in vitro studies suggest that CSP has the potential to prevent and remineralize root caries due to its increased pH buffering capacity, while subsequently facilitating the release of calcium and phosphate ions at the cementum surface.30 CSP has been added to dentifrice, desensitizing dentifrice, prophy paste, and air polishing powder with reports of decreased sensitivity after use.31,33

Tri-calcium phosphate (TCP) is a calcium salt of phosphoric acid and is a precursor to naturally occurring hydroxyapatite. TCP has the ability to remineralize because it converts into hydroxyapatite and offers limited solubility in aqueous environments.34,35 When TCP is combined with an organic or nonorganic substance, a barrier is created. This barrier allows for a targeted and timely delivery of calcium and phosphate at the tooth surface.34

Products containing TPC plus an organic/inorganic agent are designed to increase enamel remineralization, extend fluoride release, and provide anti-erosion capacities.36,37 When combined with fluoride, TCP is designed to help optimize fluoride uptake and provide an extended fluoride release time, thus creating a stronger and more acid resistant enamel.34 TCP with fluoride is not designed to be used alone, but to act collectively with the naturally occurring fluoride, calcium, and phosphate found in salivary secretions.34Currently TCP technology can be found in professionally prescribed dentifrice that contains 1.1% sodium fluoride (NaF) and professionally applied fluoride varnish containing 22,600 ppm NaF.

Despite their differences in delivery systems and contents, the various forms of preventive agents containing calcium and phosphate compounds have shown to have less demineralized values and higher remineralization potential when compared with teeth remineralized with natural saliva alone.16,29 The literature suggests that the combination of fluoride and calcium/phosphate agents delivered topically can positively affect enamel hardness, remineralization, and occluding of dentinal tubules to reduce dentinal hypersensitivity.12 These innovative agents should be prescribed in conjunction with topical fluoride as an additional preventive option for caries management.

Martha J. McComas, RDH, MS, is a clinical assistant professor in the Department of Periodontics and Oral Medicine, Dental Hygiene Program, at the University of Michigan School of Dentistry in Ann Arbor. She has 18 years of clinical dental hygiene experience in general and periodontal practice.

Hypersensitivity in the Orthodontic Patient 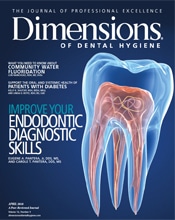