How Can I Generate Enough Strokes to Remove Tenacious Calculus?

I am having trouble generating strokes that are powerful enough to remove tenacious calculus. Do you have any suggestions?

QUESTION: I am having trouble generating strokes that are powerful enough to remove tenacious calculus. Do you have any suggestions?

Using the side of the middle finger is an effective position for two reasons. First, it lifts the handle so you get proper working angulation. If you grasp with the soft pad of the middle finger, the handle drops too low and the blade angulation tends to be too closed on the distal or too open on the mesial. The handle needs to be uprighted by resting it on the top of the side of the middle finger. The second reason is the need for resistance from the fulcrum. By placing the bony part of the finger underneath the instrument, a strong pivot point is created. When you slip down onto the soft fleshy part of the finger, there is nothing to lean against, leaving you with inadequate leverage and pressure. This problem also occurs when a Gracey 11–12 curet or universal curet is used on the mesial surface of a mandibular first molar from the buccal or lingual approach. Scaling with the shank resting on the fleshy, middle part of the pad will result in a weaker stroke, and the blade will be too open as you scale across the mesial surface.

So remember that when scaling with all curets and scalers, the shank or handle of the instrument should always rest on the bony corner of the middle finger, next to the fingernail. This offers the firmest fulcrum point—providing the best control, leverage, and lateral pressure.

Xerostomia from A to Z 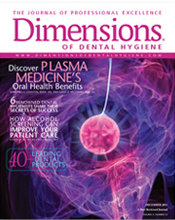