What the research says about the role of antimicrobial toothpastes in the quest for oral health.

Patients depend on dental hygienists to recommend products that will support their oral health. Some of the most common questions asked are about choosing the right toothpaste. For patients dealing with gingivitis, periimplantitis, caries, enamel erosion, or oral malodor, an antimicrobial dentifrice may be the best choice. Antimicrobials either destroy (bactericidal) or inhibit (bacteriostatic) the growth of pathogenic microorganisms. They are available as broad-spectrum antiseptics that inhibit microorganisms or antibiotics that inhibit or kill a specific group of bacteria. Triclosan and stannous fluoride are antimicrobial ingredients available in over-the-counter dentifrices. Table 1 highlights their key components.

Triclosan is an antibacterial, antifungal, and antiviral substance found in dentifrice and other consumer products. The synthetic, broad-spectrum, chlorinated aromatic compound contains the antibacterial phenol, and is effective against both Gram-positive and Gram-negative bacteria. Triclosan is approved by the federal Food and Drug Administration (FDA) as a Class III drug, meaning it has high solubility and low permeability.1

Five recent studies showed that a 0.3% triclosan/copolymer dentifrice reduced plaque and gingival inflammation.2–6 In a study that examined the effects of a triclosan dentifrice on plaque and gingivitis, Mankodi et al found that the triclosan dentifrice produced reductions of varying degrees across all indices.2 Mateu et al concluded that the triclosan dentifrice was efficacious for the control of established supragingival plaque and gingivitis.4 Sreenivasan et al reported that the use of triclosan/copolymer dentifrice may enhance implant maintenance by reducing plaque biofilm and gingival inflammation.5 A 2011 review found that triclosan copolymer/fluoride dentifrice has significant evidence to support its benefits, including improved supragingival plaque control; enhanced gingival health; reduced potential of gingivitis progressing to periodontitis; arresting progression of periodontitis; preventing supragingival calculus; and controlling oral malodor.7 Triclosan also has anti-inflammatory effects, including the suppression of microbial-pathogen recognition pathway molecules and acute and chronic mediators of inflammation.8,9

Recently, concerns have been raised about the safe use of triclosan in consumer products, including toothpaste. The FDA states that triclosan is not known to be hazardous to humans and that there is insufficient evidence to recommend changes to its current usage.10 The FDA is engaged in an ongoing review of the ingredient and will release its findings in late 2012.10

Stannous fluoride has both bacteriostatic and bactericidal qualities that make it effective against a wide range of bacterial species, including those that cause dental caries, gingivitis, plaque and calculus, and oral malodor.11–19 Two long-term clinical trials conducted on the use of stannous fluoride in dentifrice reported 14% to 20% reductions in gingivitis and 20% to 33% reductions in gingival bleeding.20,21

Stannous fluoride also blocks dentinal tubules, making it an effective treatment for dentinal hypersensitivity.22–27 He et al conducted a controlled, randomized study on subjects with moderate sensitivity.23 One group brushed twice daily with a stannous fluoride dentifrice while the other brushed with a sodium monofluorophosphate dentifrice. Subjects’ sensitivity was assessed at the first application, day 3, and week 2 of use. The group using the stannous fluoride experienced significantly better sensitivity relief both initially and through the end of week 2 in comparison to the sodium monofluorophosphate dentifrice group.23

Antimicrobial dentifrices are generally effective. Products with the American Dental Association Seal of Acceptance have gone through a rigorous independent review process to ensure their claims of efficacy and safety are valid. When recommending a dentifrice, many factors should be considered, such as patient need, compliance, and availability/expense of the product.

A thorough assessment of a patient’s condition and self-care regimen is necessary to determine the best product for individual patient needs. The possibility that a patient may be using another antimicrobial product should be considered in the recommendation process. Table 2 provides an example of a patient questionnaire that can be used to help oral health professionals gather necessary information.

Today’s dental consumers may base their oral care product choices on information gleaned from the Internet or magazines. This can lead patients to purchase a “quick fix” to address their oral health problems. Dental professionals need to effectively educate patients about the evidence base for available products, and emphasize that these products are only one part of an effective self-care program. The use of antimicrobial dentifrices will benefit patients who need assistance with reducing the bacterial load in the oral cavity—an important factor in maintaining both oral and systemic health. 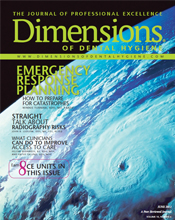