While tooth extraction can often lead to bone loss, oral health professionals can use a variety of strategies to encourage bone health.

Dental hygienists specialize in the prevention and treatment of oral disease, all while helping patients maintain their full dentition. Unfortunately, tooth loss is sometimes inevitable due to decay, periodontal diseases, or trauma. Upon tooth extraction, the gradual loss of bone and oral complications may ensue.

As dentistry continues to evolve, the ability to regenerate bone has expanded to include several new procedures. In the past when a tooth was removed, the solution was to place a bridge or a partial denture. Today, restoration is possible through implant therapy. The ability to place an implant, however, may be compromised by the lack of bone support needed to restore bone height. This month, Sebastiano Andreana, DDS, MS, shares his expertise on advances in surgical procedures and the materials used to fill empty sockets, in addition to discussing the role of dental hygienists in supporting these techniques.

Tooth loss can have devastating effects on both oral and systemic health and is most often caused by oral diseases such as dental caries and periodontal diseases, as well as root fractures, trauma, and orthodontic treatment.1–3 Tooth loss is affected by socioeconomic factors and is found more often among indigent populations.4–6 Age, education, access to dental care, dentist/population ratios, and insurance coverage also affect the prevalence of tooth loss.4,7,8 In the United States, the prevalence of tooth loss has declined since the 1970s; however, some groups remain more deeply affected than others. According to the National Health and Nutrition Examination Survey, older adults, black adults, smokers, and those with lower incomes and less education have fewer remaining teeth (Table 1).9 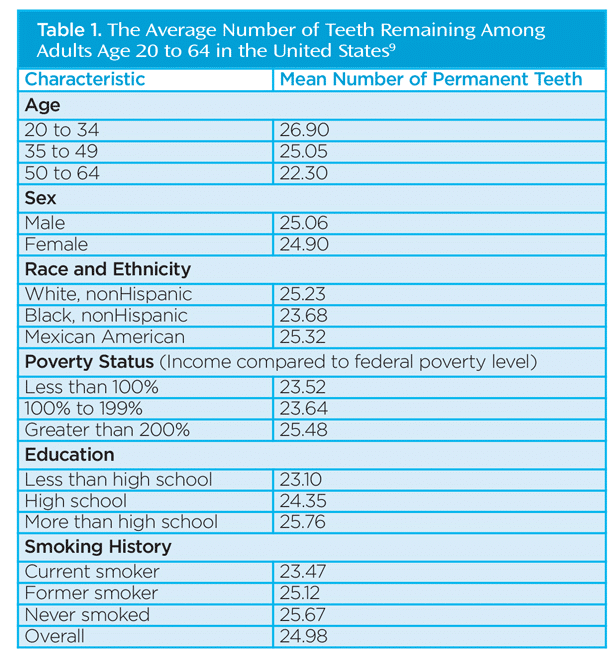 Approximately 20 million teeth are extracted every year in the US.1 Typical consequences of tooth extraction include loss of hard tissues, accompanied by alterations of adjacent soft tissues. According to Watzek,10 tooth loss is the single most important factor underlying alveolar bone loss. Classic, early studies by Atwood2 and Johnson3 showed that tooth extraction is followed by loss of alveolar bone. Highly detailed studies by Lekovic et al11 and Barone et al12 reported that bone loss at the site of the extraction is more prominent in the buccolingual dimension, particularly on the facial aspect of the socket, accompanied by minor but still recordable vertical bone loss. The combination of vertical and horizontal bone loss is classified as a Siebert Class III defect, representing a clinical challenge for oral health professionals. A reduced alveolar ridge with a defect visible mostly in the facial site is also due to bone loss (Figure 1). Typically, the bone loss progresses more rapidly in the first 6 months. Rates of progression vary, with Carlsson and Persson13 reporting an initial progression rate of 23% and an additional 11% within 2 years. On the other hand, Ashman and Bruins14 report the resorption rate at 40% to 60% within the first 2 years to 3 years, continuing at an annual rate of 0.25% to 0.5%.

The bone loss at the extraction site is even greater in the presence of sockets that have lost one or more walls due to periodontal diseases, endodontic pathologies, and trauma.15 Several reviews16–18 have concluded that tooth extraction leads to malformations of the site, which could jeopardize the ability to place implants without complex surgical procedures. A fixed dental prosthesis can be placed as an alternative to implant placement to replace the missing tooth; however, with bone loss and soft tissue reduction, root exposure can occur, leading to root caries and compromising the bridge’s longevity. The complexity of this clinical situation has led to the development of methods to minimize or prevent bone loss following tooth extraction. Techniques and materials have been proposed, including different extraction techniques, followed by manipulating the alveolar soft tissue adjacent to the extraction sockets and addressing the filling of the socket with materials that eventually minimize bone loss.

The surgical technique used during tooth extraction is of paramount importance. Lisowski reported in 1945 that when performing a dental extraction, “Extensive surgery was contraindicated and that the resultant alveolar resorption was aggravated proportionately to the increase in the extent of surgery.”19 This could be interpreted as the first indication for what is known as “atraumatic extraction,” a gentle procedure that attempts to minimize the inflammatory processes after extraction. Inflammation adjacent to bone and within the bone leads to bone loss, as seen in periodontitis and endodontic lesions.

The atraumatic technique involves luxating the roots by using fine periotomes, aiming at preserving the alveolar walls (Figure 2).20 Previously, tooth extraction was performed and then the socket fill was done with a flap approach.21–23 Barone et al12 reported the clinical outcomes of flapless vs flap tooth extraction. The flap approach was used to facilitate the extraction and to encourage primary closure of the socket. The flaps were raised before tooth extraction. Further investigations addressed the fact that once the periosteum is removed from the bone, bone loss occurs at approximately 0.5 mm to 0.8 mm.24,25 The bone loss, which occurs primarily on the buccal soft tissue, is caused by a reduction in the blood supply at the bone surface and the inflammatory response initiated by the surgical trauma. Due to these physiological events, flapless extraction techniques have been introduced.20,26 The flapless approach is better for soft tissue healing and patient comfort, as well as minimizing bone loss after tooth extraction. It does not, however, allow for covering the grafted material. For this purpose, membranes of different materials have been used, including collagen and polylactic acid (Figure 3).27,28

Biologically, bone from the same patient would seem to be ideal. The bone is harvested from the patient from a different site than the socket itself. This technique, however, may lead to increased morbidity and increased discomfort for patients. The use of human bone from donors is also very common in the US. Several clinical studies have reported the use of demineralized freeze-dried bone allograft (DFDBA) and nondemineralized freeze-dried bone allograft (FDBA). Jambhekar et al26 summarized the clinical outcomes of these studies, which were conducted with a flapless approach. The authors reported a mean bone loss of 1 mm (in width) following the combined use of FDBA and DFDBA; 1.65 mm when only FDBA was used; and 2.18 mm when only DFDBA was used in a flapless approach. They also reported a buccal wall height of at least 0.37 mm when DFDBA was used and 0.8 mm when the combined approach was implemented.

The use of xenograft, or bone from bovine, equine, or porcine origin, is common in Europe. Similar to the results seen in humans, there was a typical bone loss of 1.3 mm in the buccolingual dimension, indicating a small narrowing of the alveolar ridge, and an average reduction of 0.57 mm at the crest in the coronoapical direction.

Synthetic bone materials have also been widely used in clinical practice. Among those, medical-grade calcium sulfate, hydroxyapatite, calcium phosphosilicate putty (bioglass), and beta-tricalcium sulfate are the most common. The clinical outcomes in terms of bone loss after socket fill with synthetic material is similar to the results found when other graft materials of biological origins are used.26

These materials may be used in combination with one another or mixed with human blood derivatives, such as platelet-rich plasma.27,29 Recently, platelet-rich fibrin has been added to the material armamentarium. Human recombinant technology has also been used successfully.22

Regardless of the material used, the graft material needs to be covered so it does not fall out of the socket and to prevent food debris from contaminating the graft. Covering the graft also provides a favorable environment for the gingival epithelium and fibrous connective tissue to close the socket, enabling soft tissue to protect the site while the graft material is turned into live, viable bone. Following successful bone regeneration within the socket and the preservation of healthy gingival tissues, a predictable implant placement is likely.30

ROLE OF THE DENTAL HYGIENIST

Regardless of the technique, materials used, and patient health status, the healing socket has to be monitored and managed. Dental hygienists are well positioned to assess the health of sockets at recare appointments and administer topical or local antimicrobials and wound healing promoters as needed.31,32 Patients undergoing bone regeneration need frequent recare appointments to reduce the bacterial burden. Scaling and root planing should be performed at 3-month to 4-month intervals. Patients should also receive intense oral hygiene education to ensure a high level of self-care, as well as dietary counseling to reduce the amount of sugar and acid consumed in order to decrease bacteria counts. If applicable, tobacco cessation therapies should be provided. Patients may also want to consider taking a vitamin C supplement, as it repairs and supports connective tissue.33

Tooth extraction is a common procedure in dentistry necessitating that oral health professionals be prepared to help patients prevent bone loss post-surgery. This is accomplished by using the most appropriate surgical techniques, filling the socket with materials that will encourage bone growth, and helping patients make the best decisions about their oral and systemic health to support a healthy environment in the oral cavity.

Sebastiano Andreana, DDS, MS, is director of implant dentistry and an associate professor in the Department of Restorative Dentistry at the School of Dental Medicine at the University at Buffalo, The State University of New York. He is a past president of the American Association of Dental Research, Buffalo chapter. Andreana has published more than 100 articles both nationally and internationally in the fields of endodontics, periodontology, implant dentistry, dental materials, and lasers in dentistry. He has presented his work in North, Central, and South America, as well as throughout Europe. 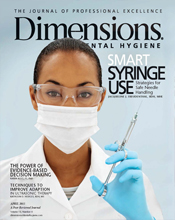