The debate over whether antibiotic prophylaxis is necessary to prevent this life-threatening infection remains ongoing.

By Sandra Castellanos, AAS, RDH, BS, MA, CHES On Jan 5, 2016 1
PURCHASE COURSE
This course was published in the January 2016 issue and expires January 31,2019. The authors have no commercial conflicts of interest to disclose. This 2 credit hour self-study activity is electronically mediated.

While a healthy immune system typically prevents circulating microbes from causing harm, circulating bacteria can cause problems throughout the body in some individuals. The valves of the heart, as well as implanted orthopedic devices are typical targets. Bacteremia (presence of bacteria in the bloodstream) appears to be related to activities of daily living, such as eating and performing oral hygiene like flossing and toothbrushing (Table 1).1–3,5–7 The presence of dental disease, such as periodontitis, may also increase the incidence of bacteremia.6

To limit the likelihood of infective endocarditis and prosthetic joint infections, the American Dental Association (ADA), American Heart Association (AHA), and American Academy of Orthopaedic Surgeons (AAOS) previously recommended prophylactic antimicrobial therapy for patients with certain heart conditions and some or all patients with prosthetic joints prior to invasive dental procedures. However, this is no longer the case. Recent reviews of the scientific evidence suggest that the risk of adverse reactions to antibiotic therapy may outweigh the benefits of prophylaxis for most patients because the bacteria most often cultured from these infections do not appear to be of oral origin (Table 2).8,9 Authors have noted that the increased use of antibiotics, insufficient controls on drug prescriptions, and inadequate compliance with treatment regimens have resulted in increased resistance of bacteria to antibiotics.2,5,9–13 These observations, along with the fact that bacteremias commonly occur, led the ADHA and AHA to revise long-standing recommendations for antibiotic premedication for patients who may be prone to infective endocarditis.2,5

The updated AHA guidelines suggest there may be instances in which the use of antibiotics remains indicated for small numbers of patients.2,5,13 The guidelines recommend antibiotic prophylaxis only for patients with certain preexisting vascular conditions associated with the highest risk of adverse outcomes from infective endocarditis.2 It remains unclear if these patients are more prone to developing the infection. Patients with the following conditions may require antibiotic prophylaxis:

For many years, dental procedures have been considered a potential cause of infections that threaten orthopedic implants. Therefore, premedication prior to dental procedures was common for patients with joint replacements. Premedication was also routinely prescribed for patients with other implants, such as orthopedic screws, pins, etc. In 2013, the ADA and AAOS published updated, evidence-based guidelines that recommended dental professionals consider discontinuing the routine prescription of prophylactic antibiotics for patients with prosthetic joints.1,3,5,20–24

In 2014, a new review of antibiotic prophylaxis for patients with orthopedic implants was conducted by the ADA alone.5 This review, like the combined AAOS/ADA review published in 2013, found no association between dental procedures and prosthetic joint infections. The ADA review concluded more definitively that the use of prophylactic antibiotics prior to dental procedures was not recommended for patients with prosthetic joint implants. In January 2015, the ADA Council on Scientific Affairs continued to discourage prophylactic antibiotic use for most patients with prosthetic joint implants. However, it also reminded practitioners and patients to consider the use of antibiotic prophylaxis in clinical circumstances that pose a significant medical risk to the patient.5,21–23

According to the AHA, antibiotic prophylaxis is recommended only for patients with conditions associated with the highest risk of infective endocarditis who will receive dental procedures that involve perforation of oral mucosa and manipulation of gingival tissues and/or periapical region of teeth. There is a wide variation in reported frequencies of bacteremia in patients receiving invasive dental procedures (Table 3).2,3,5 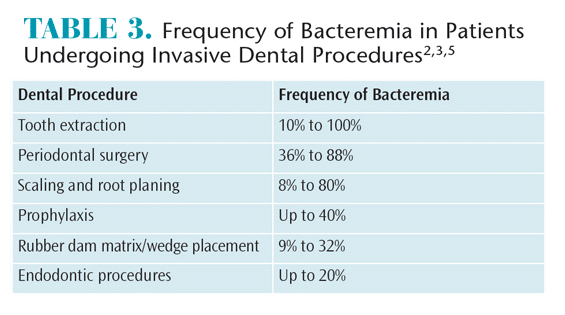 In light of the flurry of recent recommendations—as well as the data revealing an increasing incidence of infective endocarditis in England in the wake of ending antibiotic premedication for patients historically thought prone to the infection—the dental professional and the individual patient must weigh the risks and benefits of antibiotic use. It may be prudent to consult the patient’s cardiologist or orthopedist if doubt exists on whether the patient should receive antibiotic prophylaxis.25

A decision to use a certain type of antibiotic should be based on a thorough medical and dental history with emphasis on the effects of past antibiotic use. Practitioners need to be especially aware of any previous adverse reactions to relevant antibiotics. Current medications and the possibilities for drug interactions, and risks of microbial resistance are other important considerations.3,9–11,20 Practitioners should select an antibiotic that is active against the pathogens likely to cause the relevant infection. For example, recent studies suggest that S. aureus appears to be the most common cause of acute infective endocarditis, as well as the late infections of prosthetic joints at which antibiotic prophylaxes are aimed.

There is also evidence that oral microflora is becoming increasingly more resistant to antibiotics.3,9–11,20 Repeated use of antibiotics can lead to antibiotic-resistant microorganisms in the oral cavity. Maintaining an interval of at least 10 days to 14 days between dental appointments to allow the patient’s normal oral flora to re-establish is recommended.2,10,12

Amoxicillin (for patients not allergic to penicillin or cephalosporin drugs) is the preferred choice for oral therapy because it is well absorbed in the gastrointestinal tract and provides high and sustained serum concentrations. Two grams of amoxicillin is sufficient to reach adequate serum levels for several hours, and the inhibitory effect of the drug is enough to eliminate the need for a post-operative dose.2,12 Patients who are unable to take medications orally can be treated with an antibiotic injection 30 minutes prior to the procedure. For example, 2 g of intramuscular or intravenous ampicillin can be administered. To prevent possible cross-reactions, cephalosporin should not be administered to patients with a history of anaphylaxis, angioedema, or urticaria after treatment with any form of penicillin, including ampicillin or amoxicillin.

There are no current recommendations for antibiotic premedication for dental patients with prosthetic implants. In the wake of the ADA’s 2015 recommendations, which were developed and published independent of the AAOS, both organizations are now involved in a joint effort to develop appropriate use criteria to better guide future behaviors.

Prophylactic antibiotics should be consumed in a single dose 30 minutes to 60 minutes prior to dental treatment. This allows the antibiotic to reach adequate blood levels, thereby limiting the viability of bacteria introduced into the bloodstream. For individuals who are to be premedicated, practitioners must always ask if the patient has consumed the prescribed drugs before starting a dental procedure. If a patient has failed to take the prescribed drugs, it is unclear whether they should be treated until the prophylactic drug has been consumed.2 If the dental practitioner elects to proceed with treatment, the AHA recommends administering the appropriate prophylactic dose with 2 hours (Table 4).2

Acknowledging the downsides to antibiotic use mentioned above and in light of limited supportive evidence, combined AAOS-ADA recommendations in 2013 suggested that practitioners consider not premedicating certain patients with orthopedic implants. For reasons unclear, in early 2015 the ADA published newer guidelines independent of the AAOS that recommended no prophylactic antibiotics for dental patients with orthopedic implants. The AAOS and ADA have since collaborated to establish joint appropriate use criteria for premedication, which should be released soon.

The Hallmarks of Alzheimer Disease 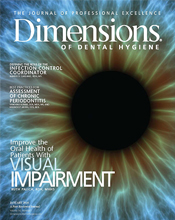 When scaling and root planing, what ergonomic adju

While implant therapy is well-known for its safety