Dimensions of Dental Hygiene, with premier sponsor Colgate and supporting sponsors Patterson Dental and PDT Inc, is pleased to announce Olga A.C. Ibsen, RDH, MS, FAADH, as the 2017 recipient of The Esther Wilkins Lifetime Achievement Award. This honor is presented annually to recognize the distinguished career of a worthy individual who has consistently and effectively contributed to the enrichment of the dental hygiene profession. For nearly 50 years, Ms. Ibsen has promoted oral health, taught dental hygiene students, and provided practitioners with continuing education (CE). She is best known for her highly regarded textbook, Oral Pathology for the Dental Hygienist, co-authored with Joan Phelan, DDS, which is now in its 7th edition. Ms. Ibsen is an adjunct professor in the Department of Oral and Maxillofacial Pathology, Radiology, and Medicine at New York University, College of Dentistry, and an adjunct professor in the Department of Dental Hygiene at the University of Bridgeport. She has served in a variety of dental hygiene roles including clinician, change agent, writer, editor, consumer advocate, educator/health promoter, and researcher. “My goal as a professional has been to make a difference in the lives of patients, students, and colleagues. Esther led the way. She was a dear friend, colleague, and mentor,” says Ms. Ibsen. “The Esther Wilkins Lifetime Achievement Award is an incredible honor. Presenting it to me validates my lifetime of achievements as I follow previous recipients of this award. I hope Esther is smiling, and we know she is dancing!”

What’s in a Name? 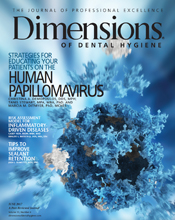