New Additions to the Prevention Front

An update on effective approaches in the control of dental caries.

The concept of dental caries prevention is not new to the scope of dental hygiene practice. Dental hygienists have been applying in-office fluoride treatments and sealants to children’s teeth since these technologies were introduced. Although the caries rate declined after the widespread recognition of the effectiveness of fluoride in preventing caries, it has begun to rebound in recent decades in young children and older adults.1,2 Dental hygienists are integral to prevention and thus must be informed about all current approaches used for the control of dental caries.

Dental caries is an infectious bacterial disease. That is, the bacteria that cause dental caries are capable of being transmitted from one individual to another. The most common route of transmission is from mother to child, usually within months after birth, provided that the mother has high levels of caries-causing bacteria.3

Adequate salivary flow is necessary to maintain oral health. Saliva has enzymatic properties that break down food residue and neutralize acids, in addition to antibacterial components and the calcium and phosphate necessary for tooth remineralization.

The bacteria that cause caries are a normal component of oral flora and are found in low numbers in healthy mouths that do not have active caries. When the consumption of fermentable carbohydrates is high, including complex carbohydrates such as cereals and pasta, there is a shift in the bacterial composition of dental plaque.4 As the proportion of cariogenic bacteria that thrives in an acid environment increases, more acid is produced each time fermentable carbohydrates are consumed. When demineralization—caused by acid production—outpaces remineralization, carious lesions begin to form. They appear first as white spot lesions but can later progress to frank cavitation.

Dental caries prevention can be divided into two types of strategies. The first type aims to interrupt the bacterial or carbohydrate contributors to the disease. Multiple approaches are currently in use or in development that attempt to address the bacterial contribution including: removing it, killing it, modifying it, interrupting the transmission of it, or vaccinating against it. The second type of dental caries prevention strategy aims to enhance those factors that protect against disease with products and therapies designed to strengthen the resistance of the teeth to acid attack and aid in remineralization.

Removing bacteria through good oral hygiene is not adequate to prevent dental caries.5 This is especially true for children and older people in whom the rates of dental caries are highest. Both groups may be challenged by their physical inability to adequately perform the tasks associated with good oral hygiene. In adults with periodontal diseases, the anatomy of exposed roots may make plaque removal very difficult (hence the need for the 3-month to 4-month preventive or maintenance appointment).

Killing bacteria through the use of antimicrobials or antiseptics is another approach to caries prevention. The products used for this are triclosan, chlorhexidine gluconate (CHX), and povidone-iodine. Triclosan is commercially available in fluoridated toothpaste. CHX is a prescription at-home mouthrinse approved for use in treating gingivitis and is recommended for the treatment of people at high risk of dental caries.6 The recommendation is to use CHX for 1 week once a month. At this time there are no CHX products available for at-home use by children.

The use of povidone- iodine is being suggested as an inoffice treatment for dental caries among high-risk patients, particularly children.7 Povidone- iodine is an antiseptic that can be applied to dental and mucosal surfaces and is available in unit doses that facilitate oral application. The recommendation is to dry the teeth, swab them with iodine, wipe off the excess, and apply topical fluoride varnish. Contraindications to its use are iodine sensitivity, a history of thyroid disease, and pregnancy.7

Modifying bacterial plaque is the purpose of using probiotics in dental caries prevention. The concept behind probiotics is to use good bacteria to replace bad bacteria in the oral flora. Though some probiotics have been tested and shown to reduce caries or S. mutans, none have come to market because of the difficulties associated with providing these products commercially, such as shelf-life issues and storage conditions.8

An important concept behind the strategy of modifying the bacteria in dental plaque rather than attempting to kill it is the recognition that most antimicrobials are broad spectrum and killing all bacteria leaves the oral cavity susceptible to repopulation by commensal (beneficial or not harmful) or pathogenic bacteria. Dental plaque is a very complex and highly organized microbial flora with more than 700 kinds of bacteria present.8 This ecological view of dental plaque meets the definition of a biofilm where the behavior of the colony grown on a solid surface is different from the behavior seen in a liquid medium.8 The result is that antimicrobials, though they target bacteria indiscriminately, frequently do not reach the pathogenic bacteria at the heart of a biofilm.8

Xylitol is a sugar-alcohol that appears to modify dental plaque. A naturally occurring substance (fruits, vegetables, hard woods) with a sweetness equal to sucrose, it is approved for use as a sugar substitute because it is not fermentable by bacteria. Regular use of xylitol (6 g to 10 g per day distributed over three to five administrations) has been shown to reduce the levels of S. mutans in plaque and saliva.9 Xylitol appears to select for a less pathogenic S. mutans and one that does not adhere as readily to the tooth surface, resulting in a reduced amount of plaque. This anticariogenic effect of xylitol can be realized through daily use of chewing gums and lozenges/mints that have high enough xylitol content to achieve the 6 g to 10 g needed per day. A challenge to the use of xylitol is to find delivery vehicles that are acceptable for use with small children and infants. A study showed that the topical application of a xylitol syrup (8 g per day over two to three administrations) was effective at reducing caries in infants.10

Interrupting the transmission of cariogenic bacteria from mother to child is a proactive strategy for preventing caries among young children. Preventing transmission is especially important because the earlier children’s mouths are colonized by S. mutans, the higher the rates of decay.11 In two studies done in Scandinavia, xylitol was used by mothers during the eruption period of their child’s primary teeth. These studies demonstrated xylitol’s ability to prevent transmission of S. mutans from mother to child and to reduce children’s incidence of caries in later years.11-13 Vaccination against dental caries appears years away if possible at all. Though experimentation in animal models has been conducted for several decades neither active nor passive immunization strategies are currently being pursued in clinical trials.8

Marilynn Rothen, RDH, MS, is a clinical associate professor in the Department of Oral Health Sciences at the University of Washington (UW) School of Dentistry in Seattle. She is the associate director of the Master of Science Program in oral biology for dental hygienists. She has served as manager of the Regional Clinical Dental Research Center since 1996. Rothen is the lead dental hygienist on the Health Resources and Services Administration (HRSA)-funded training grant, Early Childhood Oral Health Training Program (EChOTrain).

An In-depth Look at Air Polishing

The Safety and Efficacy of Esthetic Tooth Whitening 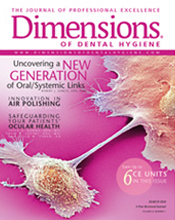