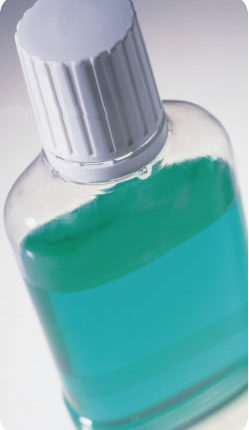 Mouthrinses can be an effective adjunct to mechanical cleaning in the fight against plaque.

Chemicals have been used for plaque reduction since 2700 BC when recommendations included rinsing the mouth with urine from a child.1 Other recommendations have included beer, wine, honey, alum, vinegar, dill, anise seed, myrrh, and pastes derived from animal parts.2 Today, with advanced chemical engineering, a number of products are marketed for plaque and gingivitis reduction.

Today, we understand plaque in a broader perspective. Dental plaque is categorized as a biofilm-an adherent, organized microbial community on the surfaces of teeth, oral tissues, and dental restorations. Bacteria in a biofilm are usually more resistant to antimicrobial agents than freely floating bacteria because they are encased in an extracellular matrix that impedes access of the agent to the bacteria and because the phenotypic changes themselves may render the bacteria more resistant. Therefore, studies of freely floating (planktonic) oral bacteria provide information on the potential antibacterial effect of chemical agents but are not predictive of clinical effectiveness alone or when compared to other agents. It is not clear if chemical agents behave the same way when encountering plaque biofilm since the agent has to penetrate the biofilm matrix to reach the more densely packed bacteria within the relatively brief period of a short rinse. Thus, mouthrinses that might be extremely effective against planktonic organisms, may not be as effective against the same organisms contained within a biofilm. Therefore, dental practitioners must rely on the results of clinical studies to determine the effectiveness of chemical agents in a mouthrinse formulation.

Mouthrinses for reducing plaque and gingivitis contain antiseptic agents. Antiseptics are chemical antimicrobial agents that in dentistry are applied topically or subgingivally to mucous membranes, wounds, or intact dermal surfaces to destroy microorganisms, inhibit their reproduction, or inhibit their metabolism. Most are bactericidal, although some are bacteriostatic. In general, they are used in a variety of topically applied products in conjunction with mechanical cleansing or debridement. Effectiveness depends on formulation, concentration, and quantity, and varies widely among agents. Antiseptics are usually available without prescription because they have an excellent safety profile and result in no significant bacterial resistance. Efficacy is agent-related with some affecting bacteria, fungi, viruses, and spores, although others are only effective against selected bacteria or other microbes. A number of antiseptics have been evaluated over the years. Those that have been frequently studied are shown in Table 1.

Of the antimicrobial products included here, chlorhexidine appears to be the most effective agent. Short-term studies have reported plaque and gingivitis reductions averaging 60% and three long-term studies showed reductions in plaque averaging 55% and 45% in gingivitis.3,4,5

Many studies of chlorhexidine have been done in Europe where a 0.2% concentration was most often used. However, studies by Segreto et al6 have shown that the 0.12% concentration has the same plaque- and gingivitis-reducing properties as the 0.2% concentration. By reducing the concentration and not the therapeutic benefit, the expected adverse effects may be reduced.

Chlorhexidine’s mechanism of action is related to a reduction in pellicle formation, alteration of bacterial adsorption and/or attachment to teeth, and an alteration of the bacterial cell wall so that lysis occurs. It is cationic (carrying a positive charge due to a deficiency of electrons), and has high substantivity (level of matter). Like most of the products discussed, with the exception of stannous fluoride, it has a long shelf life. It is sold in the United States in a 0.12% concentration in mouthrinses, which contain 11.6% alcohol with a pH of 5.5 and is approved by the Food and Drug Administration (FDA) and the American Dental Association (ADA) for control of plaque and gingivitis.

In laboratory studies, its activity is decreased by blood and purulent material. However, in clinical studies chlorhexidine has been effective following periodontal surgery. The activity of chlorhexidine is decreased by a number of anions (ions carrying a negative charge due to a surplus of electrons) including phosphate, sulfate, and carboxyl groups as well as calcium, all of which are found in dentifrices. Therefore, for maximum effect, it should not be used as a rinse with brushing, but used independently or even preceded by a water rinse if used after brushing. Chlorhexidine should be used as directed by the manufacturer-undiluted for maximum efficacy, ie, 15 ml for 20 seconds as a rinse. Adverse effects include staining of teeth, reversible desquamation in young children, alteration of taste, and an increase in calcified deposits. Long-term and microbiologic studies do not demonstrate the development of resistant strains.

Quaternary ammonium compounds have been evaluated in a number of short-term studies relative to their effect on plaque and gingivitis. In these studies, an average plaque reduction of 30% has been reported with mixed effects on gingival health. Only two 6-month studies have been published.7,8 In these studies, a 14% reduction in plaque and a 24% reduction in gingivitis occurred. The most common concentrations are 0.05% and 0.045% cetylpyridinium chloride (CPC). The mechanism of action is related to increased bacterial cell wall permeability that favors lysis, decreased cell metabolism, and a decreased ability for bacteria to attach to tooth surfaces. These agents are categorized as cationic, which favors their attraction to anionic surfaces of teeth and plaque. They are surface-active agents that alter surface tension and have a low substantivity.

Adverse effects can include some tooth staining, a burning sensation in the oral cavity, and a possible increase in calcified deposits. Like chlorhexidine, their activity is altered by anionic substances, such as flavoring agents, abrasives, and other charged particles sometimes found in dentifrices. Therefore, compliance can be problematic because in order to maximize their effect, a water rinse is recommended following the use of traditional dentifrices to remove these anionic substances. This also applies to chlorhexidine. In addition, because these agents have a low substantivity, more frequent rinsing (three to four times daily) may be needed, which also affects compliance. These agents are available in a 14% to 18% alcoholic vehicle with a pH ranging between 5.5 and 6.5.

The only product in this category that has been clinically studied is a mixture of three phenolic-derived essential oils-thymol, menthol, and eucalyptol, which are combined with methylsalicylate. The mechanism of actions is related to the alteration of the bacterial cell wall. This combination is uncharged and has a low substantivity. Adverse effects are a burning sensation during use. Twice a day usage without concern for dentifrice interactions favors compliance. It is available in a 21.9%-26.9% alcohol vehicle with a pH of 4.5

Recent studies show that it may improve the efficacy of dental flossing.13-15 Dental professionals should explain to patients that this mouthrinse is not a replacement for flossing but is in addition to flossing or other methods of interdental cleansing. Floss cleanses the area of interproximal contacts (where caries is often initiated) and a chemotherapeutic mouthrinse cannot cleanse this area. Essential oil mouthrinses should be used undiluted as directed by the manufacturer: 20 ml twice daily for 30 seconds as a rinse.

Triclosan is the newest entry into the oral care category. In the United States, it is only available in a dentifrice containing triclosan and a copolymer, Gantrez, which enhances its efficacy. Outside the United States it is found in mouthrinses. Reductions in plaque average 22% and for gingivitis, 25%.15,16 These products contain 11.5% alcohol and have a pH of 6.8. In addition to antibacterial properties, triclosan also has anti-inflammatory properties.

Triclosan is a broad spectrum antibacterial agent. Studies have demonstrated that the uptake of triclosan by enamel and buccal epithelial cells is enhanced by the incorporation of a copolymer of polyvinylmethyl ether and maleic acid (PVM/MA). Numerous clinical studies conducted with a dentifrice containing 0.3% triclosan, 2.0% PVM/MA copolymer (Gantrez), and 0.243 sodium fluoride in a silica base have demonstrated the efficacy of triclosan/copolymer in reducing plaque, gingivitis, calculus, and dental caries.17 It is approved by the FDA and accepted by the ADA for these claims. Triclosan mouthrinse products are not available in the United States at this time.

Some of the mouthrinse products discussed have strong anticandidia properties and may be of value in the management of patients with chronic recurring candidiasis. In order of efficacy these agents are chlorhexidine, essentials oils, and cetylpyridinium chloride. Chlorhexidine and essential oils are used in some AIDS treatment centers to manage the recurrence of oral candidiasis.

Some studies suggest that stannous fluoride may be valuable in the reduction of plaque and gingivitis while other studies have found little or no benefit. In view of the conflicting reports, considerable reservation has been voiced on the efficacy of stannous fluoride as an antiplaque/antigingivitis agent. Also, similar equivocal findings have been reported with mouthrinses containing hydrogen peroxide. Long-term use of hydrogen peroxide containing products with concentrations greater that 3% for more than 30 days is discouraged because there are reports of adverse tissue effects in patients using these products chronically.18 Short-term use is not problematic and may offer beneficial effects on oral soft tissues. The various characteristics of mouthrinses discussed are summarized in Table 2.

Mouthrinses can be used for a variety of patients in addition to those who have difficulty with mechanical plaque control. These include use in a powered irrigation system where enhancement of the chemical agents’ effect has been reported, preprocedural rinsing for reduction in operatory aerosols from ultrasonic scalers and high-speed handpieces, management of oral mucositis (particularly with chlorhexidine), improvement of postsurgical healing, and maintenance of the health of peri-implant tissues. These usages are summarized in Table 3.

Concern has been expressed that the use of alcohol-containing mouthrinses may increase the risk of oral cancer. A recent report in the Journal of the American Dental Association19 reviewed the nine studies that referred to oral cancer and mouthrinses and concluded as follows: “The results of six of the studies reviewed are negative and provide no support for the hypothesis that use of alcohol-containing mouthwash increases the risk of oral pharyngeal cancer (OPC).” The authors concluded that this study’s positive finding resulted from recall bias. The authors concluded, “It is unlikely that the use of mouthwashes that contain alcohol increases the risk of developing OPC.” All mouthrinses accepted by the ADA contain alcohol.

Of the many mouthrinses available without prescription, only a few contain chemical agents that have some ability to kill plaque biofilms. These products have value as adjuncts to mechanical cleansing procedures. A limitation of mouthrinses is that, because they can reach subgingival plaque only to a depth of a few millimeters within the gingival crevice, they are most effective against supragingival plaque. Preliminary studies suggest that mouthrinse use with plaque-reducing properties in an oral irrigating device may have a more profound effect on subgingival plaque. At this time, only essential oil and chlorhexidine mouthrinse products and triclosan in a dentifrice formulation with the claim of plaque and gingivitis reduction are accepted for that purpose by the ADA and the FDA and have a proven record of safety. 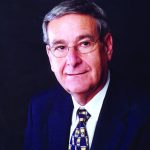 Sebastian G. Ciancio, DDS, is distinguished service professor and chair in the Department of Periodontics and Endodontics and director of the Center for Dental Studies at the Schools of Medicine and Dentistry, University at Buffalo, State University of New York (SUNY). He is also adjunct professor in the Department of Pharmacology at SUNY. He has authored or coauthored more than 100 publications pertaining to periodontal diseases. Ciancio is past president of the American Academy of Periodontology and president of the American Academy of Periodontology Foundation. Ciancio is also the 2003 recipient of the Distinguished Scientist Award in Pharmacology from the International Association for Dental Research. He has presented continuing education courses both in the United States and abroad. Ciancio is an editorial advisory board member for Dimensions of Dental Hygiene. 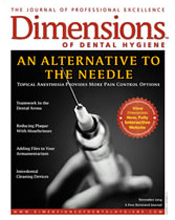