Is Laser Therapy Considered Standard of Care in Perio Treatment?

Is the use of soft tissue diode lasers by dental hygienists considered the standard of care in the treatment of periodontally involved patients (eg, to reduce the number of colony-forming units of pathogenic bacteria in pockets)?

Is the use of soft tissue diode lasers by dental hygienists considered the standard of care in the treatment of periodontally involved patients (eg, to reduce the number of colony-forming units of pathogenic bacteria in pockets)?

In order to become a standard of care, the technique needs to demonstrate clinical effectiveness with a high level of scientific evidence. Although the use of lasers in periodontal therapy has been increasing, neither the American Dental Association nor the American Academy of Periodontology has made a statement supporting the use of a diode laser as the standard of care in nonsurgical management of periodontitis.1 Presently, scaling and root planing is the standard of care in the initial treatment of periodontitis. It reduces the bacterial load, decontaminates all or part of the diseased root surface, reduces probing depths, decreases bleeding on probing, and increases clinical attachment gain. A high level of scientific evidence has demonstrated that scaling and root planing improves outcomes relative to the aforementioned parameters.

Diode lasers are used in periodontal treatment for sulcular debridement (eg, soft tissue curettage) and for bactericidal effects in periodontal pockets. The use of the diode laser in this regard has been approved as a treatment that can be provided by dental hygienists in at least 16 states. Currently, many states are reviewing their regulations on laser usage by dental hygienists. Diode lasers, however, are contraindicated for root debridement, as they can damage the root surface. Diode laser therapy is typically used in conjunction with scaling and root planing, as an adjunctive treatment. It is often provided at a later date subsequent to completion of scaling and root planing. The goal is to further reduce bacterial pathogens post-scaling and root planing, and curettage the diseased epithelium of the pocket.

Evidence indicates that although various laser therapies may offer a promising role in the future, the current use of a diode laser as an adjunct to scaling and root planing does not provide an improved clinically significant benefit to scaling and root planing alone when evaluating pocket probing depth (PD), clinical attachment loss (CAL), or plaque indices (PI). Measured outcomes for bleeding on probing and gingival inflammation, however, showed a small, but statistically significant advantage in favor of the adjunctive use of diode lasers.2

Decreasing the Impact of Bias

A Leader in Dental Hygiene

The Relationship Between Porphyromonas Gingivalis and Systemic Disease 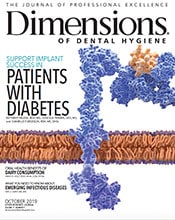