The use of oral irrigation offers a myriad of health benefits, particularly for those with diabetes and dental implants, as well as patients with orthodontic appliances.

By Jasmine Ramakrishna, RDH On Nov 9, 2012 0
PURCHASE COURSE
This course was published in the November 2012 issue and expires November 2015. The author has no commercial conflicts of interest to disclose. This 2 credit hour self-study activity is electronically mediated.

The mouth is an ideal environment for the formation and growth of microbial biofilm. Plaque, a type of bacterial biofilm, is made up of multiple bacterial species that dwell on the surfaces of the teeth and soft tissues, and it contributes to a number of dental diseases. In order to maintain oral health, plaque biofilm must be removed.1 The two most recommended means of removing plaque are toothbrushing and flossing. Toothbrushing is practiced by most people, but few use floss.2,3 In order to increase the rate of interdental cleaning among patients, effective and user–friendly techniques are strongly needed. This article will focus on the use of oral irrigation to improve interdental cleaning.

The oral irrigator is a modality that can effectively remove plaque and is simple to use. Since its introduction in the 1960s, use of the oral irrigator has become increasingly widespread because of its proven efficacy. A number of studies have shown that oral irrigation is effective in reducing gingivitis1–12 and bleeding,1–10 and is often recommended for patients with diabetes9 and dental implants,11 as well as those who wear orthodontic appliances.3,10,13 Oral irrigation is effective because of its ability to penetrate deeper into periodontal pockets, disrupting bacteria in depths of up to 6 mm.14,15

The oral irrigator was first introduced in 1962. The product’s efficacy, safety, and ability to address a variety of patient needs are supported in numerous clinical studies.1–12 Patients in periodontal maintenance,6,7 those with orthodontic devices,3,10,13 patients with diabetes9 and dental implants,11 and those who are non–compliant with flossing may particularly benefit from using an oral irrigator.2,8,10 Daily oral irrigation reduces plaque biofilm,1,2,8–10 calculus,12 gingivitis,1–12 bleeding, 1–10 probing depth,1,4,6,7 periodontal pathogens,5,14,15 and a host of inflammatory mediators.1,9

In an ex vivo (research conducted on tissue in an artificial environment) study that used scanning electron microscopy, Gorur et al showed that the hydraulic forces generated by an oral irrigator’s precise pulsation (1,200 per minute) and pressure (minimum 60 psi) removed 99.9% of plaque biofilm from treated tooth surfaces both above and below the cementoenamel junction in 3 seconds. 16 Cutler et al found that oral irrigation reduced the traditional markers of periodontal disease (plaque, bleeding, and gingivitis) within 2 weeks. In addition, oral irrigation had a regulating effect on the production of inflammatory cytokines, which when overproduced, cause disease.1 Measures taken 8 hours post–irrigation (to prevent any dilution effect) found irrigation reduced the proinflammatory mediators interleukin–1 beta (IL–1ß), increased the anti–inflammatory cytokine interleukin–10 (IL–10), and maintained the bacteriocidal agent interferongamma (IFN–?), thus demonstrating the ability of oral irrigation to inhibit disease activity (Figure 1 and Figure 2).1

These findings support the conclusions made by Chavez et al who noted that improvements in gingival health from irrigation may involve specific host–microbiota alterations in the subgingival environment.5

BENEFITS FOR PEOPLE WITH PERIODONTAL DISEASES

Periodontal treatments aim to remove subgingival plaque so that healthy oral flora may be restored. Standard procedures for periodontal therapy include root planing, scaling, and local or systemic antibiotic regimens that, combined with meticulous selfcare, are intended to eradicate these microbes. The benefits of flossing may be limited for peop

The investigators discovered that pulsating oral irrigation delivered an aqueous solution approximately half the depth of the pocket.17 Specifically, with the tip placed at a 90° angle, a 67% penetration of deep pockets, a 44% penetration of moderate pockets, and a 71% penetration of shallow pockets were achieved.17 Cobb et al and Drisko et al examined bacteria disruption and both groups found that oral irrigation disrupted bacteria up to 6 mm.14,15 The American Academy of Periodontology has further noted that one of the greatest advantages of oral irrigation is that it helps patients maintain the bacterial reduction attained during root planing.19

Antimicrobial agents are routinely used with periodontal maintenance patients, and adding these agents to the oral irrigator may enhance efficacy. One study compared the daily use of 0.06% chlorhexidine (CHX) irrigation, water irrigation, rinsing with 0.12% CHX mouthrinse, and toothbrushing over 6 months. Results showed that the CHX irrigation was more effective than water irrigation, but daily irrigation with water was more effective than daily rinsing with a CHX mouthrinse in the reduction of bleeding.4 This is most likely due to the fact that oral irrigation penetrates deeper into pockets than mouthrinsing.18

BENEFITS FOR PATIENTS WITH ORTHODONTIC APPLIANCES

Patients undergoing orthodontic treatment face many challenges with plaque removal. Orthodontic devices serve as traps for bits of food and debris, potentially increasing microbial population on teeth surfaces and appliances alike. After orthodontic appliances have been placed, increased numbers of Lactobacilli and Streptococci have also been observed.11

Hurst and Madonia completed a study on 60 full–banded orthodontic patients age 10 to 17 to determine the efficacy of oral irrigation in preventing the increase of microbial flora.13 After 21 days, the researchers discovered that daily toothbrushing and daily oral irrigation provided a 65% reduction in Lactobacilli and an 86% decrease in total aerobic bacteria subgingivally. These reductions were maintained for another 63 days of the testing period. In contrast, those who brushed daily and used an antimicrobial mouthrinse daily showed a 10% decrease in Lactobacilli and a 25% decrease in total aerobic bacteria in the subgingival area.

BENEFITS FOR PEOPLE WITH DIABETES

People with diabetes are at increased risk of periodontal diseases, especially those without proper glucose control. Poorly controlled or uncontrolled diabetes generally results in a greater incidence and severity of periodontal diseases.9 Even people who successfully manage their diabetes may experience more bleeding and inflammation in response to the same amount of plaque biofilm than people without diabetes.9 Oral irrigation is one of the few modalities that has been tested on people with diabetes in comparison to toothbrushing and flossing. Al–Mubarak et al conducted a 3–month study on 56 subjects who had type 1 or type 2 diabetes for at least 1 year and were on diabetes medications for at least 6 months. Subjects underwent root planing and ultrasonic scaling followed by either routine oral hygiene self-care or manual brushing and twice–daily water irrigation. The results showed that the oral irrigation group experienced a 44% better reduction in inflammation and a 41% better reduction in gingivitis than the oral hygiene only group. Those using oral irrigation also had significant reductions in the plaque index. The investigators evaluated the serum levels of pro–inflammatory cytokines and found that irrigation reduced the levels of these agents better than daily brushing and flossing.9

BENEFITS FOR PEOPLE WITH DENTAL IMPLANTS

Dental implants are successful only if the tissues surrounding them remain healthy.11 The risk of implant failure is increased when plaque biofilm accumulates and causes inflammation of soft tissues surrounding the implants.11 In order to protect this investment, meticulous self–care is required. Floss can be difficult to maneuver around implant prostheses. A study conducted by Felo et al found that people who used an oral irrigator with a specialized soft rubber tip at low pressure to deliver 0.06% CHX had more significant reductions in plaque, gingivitis, and stain than those who rinsed with 0.12% CHX. Notably, irrigation was 87% more effective than rinsing in the reduction of bleeding. The presence of implants can negatively affect CHX’s substantivity, 11 but this study showed that irrigation may overcome this barrier by delivering the agent to greater subgingival depths, allowing for substantivity to the pocket epithelium.11

In order to improve the efficacy of patients’ self–care regimens, dental hygienists should effectively educate patients on the various products and methods available. Toothbrushing, followed by flossing, effectively reduces plaque when rigorously practiced,4,5,7 however, many patients find flossing difficult and it often can’t penetrate periodontal pockets where plaque buildup begins. Oral irrigation is an alternative to flossing that may be used as an adjunct to toothbrushing. Oral irrigation helps reduce gingivitis and periodontal disease, as well as offering particular health benefits to patients who have diabetes and dental implants and those who wear orthodontic appliances.9

Jasmine Ramakrishna, RDH, MS,3 works in private practice in Elburn, Ill. She is also an instructor in the dental assisting program at MK Education in Downers Grove, Ill. 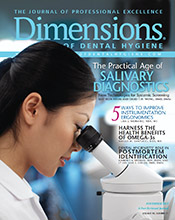