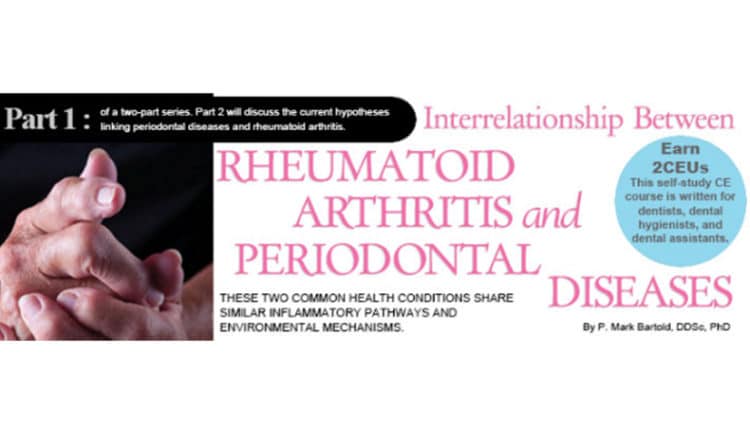 By P. Mark Bartold, DDSc, PhD On Nov 3, 2014 0
PURCHASE COURSE
This course was published in the November 2014 issue and expires November 30, 2017. The author has no commercial conflicts of interest to disclose. This 2 credit hour self-study activity is electronically mediated.

Both periodontitis and rheumatoid arthritis are chronic destructive inflammatory diseases characterized by the accumulation and persistence of an inflammatory infiltrate in the periodontal and synovial tissues, respectively—causing the destruction of surrounding soft and hard tissues (Figure 1).1 The aim of this review is to consider the similarities between these two common chronic inflammatory diseases, and the clinical ramifications of this potential association.

Manifesting as a wide spectrum of clinical entities, rheumatoid arthritis results from the combination of individual genetic susceptibility and environmental triggers. It occurs worldwide, affecting approximately 1% to 2% of the population in a female/male ratio of 3:1. Its peak onset is in the fourth and fifth decades of life.5 Men may be shielded by their hormonal composition and need a stronger genetic influence in order for the disease to develop.6 Infectious agents have been proposed to act as triggers for the development of rheumatoid arthritis, but, to date, no single organism has been identified to support this concept.7

Rheumatoid arthritis has a considerable impact on individuals’ quality of life, as well as their ability to work.8 Long duration with periods of disease remission are significant features of the natural history of this disease. Functional disability and radiologic evidence of damage to the joints are the most studied outcomes in rheumatoid arthritis. The majority of patients show radiographic evidence of joint damage within the first few years, with subsequent radiographs showing its progression over the next 5 years to 10 years.6 Studies show that some individuals experience disease progression despite the best available treatment.4

Periodontal diseases are a group of heterogeneous conditions, ranging from the relatively benign gingivitis to the more destructive forms, such as chronic and aggressive periodontitis. Up to 95% of the population may experience gingivitis; up to 50% have some form of chronic periodontitis; and between 5% to 15% develop advanced and aggressive periodontitis.9,10 Studies now indicate that the prevalence of severe periodontitis is confined to a small portion of the general population.9,10 If left untreated, gingivitis may progress to periodontitis and, ultimately, tooth loss.11 On the other hand, the disease may become self-contained and not progress, or may even enter into long periods of remission.12

There is no doubt about the importance of inflammation and the body’s immune cells in the pathogenesis of rheumatoid arthritis and periodontitis (Figure 2). The task now is to identify the specific molecular mediators of inflammation (cytokines) produced by the immune cells, and determine their effects on target cells and tissues.13,14 While the role of cytokines on normal cellular processes is important, it is their role in disease and tissue damage that has gained most attention. The unwanted effects of cytokines result from excessive production, poor control, or inadequate inhibition of their biological activity. One of the most important actions of these inflammatory cytokines is to activate the molecular and cellular events associated with bone resorption.13,14

Patients with periodontitis have similar cytokine profiles to patients with rheumatoid arthritis.1 In both conditions, tissue destruction and disease progression involve the persistent presence of high levels of cytokines that induce inflammation (eg, interleukin 1? and tumor necrosis factor-?), and low levels of cytokines that would normally suppress inflammation (eg, interleukin–10 and transforming growth factor ?).15 Furthermore, high levels of enzymes capable of degrading the tissues and low levels of inhibitors of these enzymes define the active stages of both rheumatoid arthritis and periodontitis (Table 1).

Because the primary mode of tissue destruction in these diseases is the exuberant host inflammatory response, host-modifying agents and genetically engineered chemicals that can target specific molecules involved in the inflammatory process are being developed for their possible role in the restoration of balance in the inflammatory mediators.16

Women are more likely to develop rheumatoid arthritis than men.18 Although it is reported that periodontitis is more prevalent among men, the evidence to date is insufficient to confirm that gender is a significant environmental variable for periodontitis.20

Socioeconomic status is a significant factor, influencing incidence and severity of both rheumatoid arthritis and periodontitis.21,22 While it is still not clear why this link with lower socioeconomic class exists, it might be that such individuals are less compliant with regards to their general health care. Alternatively, it is possible that low socioeconomic status leads to increased exposure to psychosocial stress, which, in turn, exerts a physiologic toll that contributes to disparities in some health conditions.23 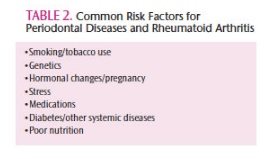 Smoking is a significant environmental modifying factor for many conditions. Through its effects on the cardiovascular system, immune cell function, and general tissue physiology, smoking is considered a risk factor for the development of both rheumatoid arthritis and periodontitis.24 Furthermore, smoking is associated with the modification of protein structures in the lungs through a process known as protein citrullination, which may be a key factor in activating and exacerbating autoimmune responses and tissue destruction in rheumatoid arthritis.25

Stress and other psychological factors, such as depression and coping mechanisms, have been well documented to influence inflammatory responses.26 These interrelationships are defined within the context of an emerging field known as psychoneuroimmunology—a multilevel theory that encompasses neural, physiologic, molecular, and genomic mechanisms to link experiences of social-environmental stress with internal biological processes that drive chronic diseases.2 Both rheumatoid arthritis and periodontitis are influenced by stress and psychological factors; therefore, psychoneuro­immunology has been proposed to play a role in both conditions.28,29

Diet can have both a protective and destructive effect on rheumatoid arthritis and periodontitis. Malnutrition and vitamin and mineral deficiencies can significantly affect normal and pathological tissue physiology.34 Obesity and metabolic syndrome may also be significant risk factors for the development of rheumatoid arthritis and periodontitis.35–38 A protective role for diet has also been proposed. Both theoretical and clinical trial evidence have shown that omega-3 fatty acids (most commonly found in fish oil) are natural anti-inflammatory agents, which can significantly influence the outcome and progression of inflammatory disorders.39 There is evidence to indicate that dietary supplementation with omega-3 fatty acids can have a beneficial effect on the outcome of rheumatoid arthritis.40 Initial studies are also showing promising results for the adjunctive use of omega-3 fatty acids for the management of periodontitis.41

It has long been recognized that periodontitis and rheumatoid arthritis share many common pathologic features. Recent studies indicate that a strong relationship exists between disease severity and extent for individuals suffering from both diseases. While causality between the two diseases is unlikely, a number of possibilities exist and should be investigated. Part two of this series, which will appear in a future issue, will discuss these theories.

Stub Out the Tobacco Habit 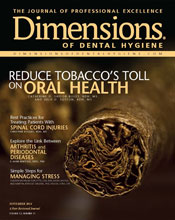