Practitioners should self-identify the presence of joint hypermobility and recognize its potential effect on the musculoskeletal system and the effectiveness of periodontal instrumentation.

Dental hygiene clinicians should be aware of the characteristics of joint hypermobility (JH) and be able to recognize how this condition can adversely impact their careers and the effectiveness of periodontal instrumentation. JH or joint laxity is an increased range of motion in the joints. Many individuals refer to this condition as “double-jointed.”1 JH is common in those with genetic diseases, such as Marfan syndrome, Ehlers-Danlos syndrome, and osteogenesis imperfecta. However, JH also occurs among individuals without rare hereditary conditions. The majority of people with JH do not experience any systemic problems.2,3 The Beighton criteria is a common guide that should be used by all clinicians to determine their level of hypermobility. The condition may be present in a few joints or widespread (Table 1).4,5 While, the Beighton criteria is traditionally used to determine general JH, it is only one of the diagnostic components for pathological syndromes.

JH occurs in 10% to 25% of Western populations.2,5–7 Its prevalence is associated with age, gender, and ethnicity.1,6 Although joint laxity is widespread in children, it decreases with age.4 Overall, women experience a higher prevalence of JH than men.7 Studies report a 37% to 57% rate of JH among women, which is almost three times higher than in men (14% to 35%).6,7

Ethnicity is a risk factor for JH.6,7 There is an increased incidence among people of African, Asian, and Middle Eastern descent.2,7 While the prevalence of joint laxity among Caucasians has been reported as 2% among men and 6% among women,3,6,7 a review of the literature indicates other races have a much higher incidence.6,7 Shahid et al8 found that JH of the hand was at least three times higher among Asians than Caucasians.

While the dental hygiene profession remains 97% female, the ethnic diversity of the workforce is growing.9,10 The 2015 American Census Bureau noted that 87% of dental hygienists are white, followed by 5.2% who are Asian and 3.2% who are African American.10,11 The high prevalence of women and the growing number of ethnic clinicians in dental hygiene suggest that JH may impact the profession.

Periodontal instrumentation places physical and technical demands on hypermobile joints and significantly impacts effectiveness. Clinicians with JH typically need to increase the use of the muscles surrounding their lax joints in order to maintain neutral positions, proper grasps, fulcrums, and adequate lateral pressure. Prolonged, repetitive efforts to compensate for the hypermobility of the joints may cause strain and lead to chronic pain. When individuals with JH experience musculoskeletal pain symptoms, medical intervention is needed.1,12 These risks highlight the need to increase awareness among dental hygienists with JH about practice techniques for increased effectiveness and injury prevention.

At the University of Southern California Ostrow School of Dentistry in Los Angeles, the ethnic diversity of dental hygiene students has grown significantly. Caucasian students are no longer the majority, with the student population now encompassing African-American, Hispanic, Asian, Eastern European, and Middle Eastern students. Over the past 20 years, this diversity has increased the prevalence of JH in the student population. This fact led the faculty to analyze these students’ grasps, fulcrums, and positioning during periodontal instrumentation. Concurrently, the number of patients with deep pockets and heavy, tenacious calculus began increasing. This prompted the innovation of techniques to help all students treat patients with advanced periodontitis. Alternative, extraoral, and reinforced fulcrums with new positions were advantageous for all students; however, they proved to be particularly helpful to students with JH. The adoption of such techniques resulted in improved clinical competency and better patient care outcomes. An introductory discussion of these modified fulcrums and positions is included in this article; however, more detailed descriptions will be featured in future articles.

The repeated stresses on the hypermobile joints, muscles, tendons, and ligaments used for stabilization and manipulation of the instrument increases the vulnerability of fragile joint tissues to increased laxity and risk of injury (Figure 1).12 Dental hygienists increase the use of their hand muscles and pinch forces when applying pressure to remove tenacious calculus during instrumentation. Individuals with JH have decreased proprioception (the body’s ability to sense itself) in their finger joints.3,13,14 The deficiencies in body awareness hinder the moving of the joints with the appropriate effort and force. The deficient sensory information increases the risk of applying excessive pressure on the joints, which intensifies hyperflexion and strains the muscles.6,12

Large diameter instrument handles allow practitioners with JH to increase finger contact for comfort and control. A clinician with JH has a tendency to use either the centers of the finger pads or the joints when holding the instrument handle, rather than the fingertip half of the pads (Figure 2). As the fingers increase pressure against the handle, the contact area increases; however, a small handle diameter has less available surface area to control the instrument.

The Dong15study demonstrated that an instrument handle with a larger diameter (up to 10 mm) can help decrease the muscle load and pinch force during manual periodontal instrumentation. This reduction can be even more critical for clinicians with JH who apply a sustained amount of muscle load to maintain the stability of their grasps.

Optimal periodontal instrumentation requires a modified pen grasp to allow dynamic movement to control the instrument and a fulcrum to provide stability and leverage. With JH, the grasp can be ineffective and tiring because it may deviate from the tripod finger positioning of the classic modified pen grasp. A hypermobile grasp usually exhibits a collapse or hyperextension of the joint closest to the tip of the index finger and the thumb (Figure 3). These bent joints are inclined to lock, preventing the ability to make adjustments during instrumentation (Figure 4). In order to allow these finger adjustments and resting of the joints during instrumentation, a relaxed grasp using exploratory detecting strokes should be used intermittently, with the firm grasp required for effective working strokes.16

Repetitive strain injuries are common in the dental hygiene profession. Most general population studies on joint hypermobility report a connection to arthralgia or joint pain,7 suggesting that there may be an increased prevalence of injury among practitioners with JH. Studies show that muscle strengthening around hypermobile joints is important to prevent discomfort and injury.17,18 Preventive strategies should be employed to manage the impact of the physical demands of instrumentation. An appropriate health care professional—such as an occupational or physical therapist—should provide recommendations for strengthening exercises and adjunctive supports. The isometric contraction of the muscles surrounding joints with hypermobility may help strengthen the ability to maintain neutral joint positions while holding instruments. Athletic tape and small finger splints for joint stability can be used as temporary props if pain or discomfort develops (Figure 5, page 26).1,17

JH causes intraoral same-arch fulcrums to collapse, affecting stability and leverage. Severe hyperflexion of the fulcrum finger can lower the hand closer to the occlusal plane of the teeth, closing the angle of the blade and limiting necessary wrist movements (Figure 6). When this occurs, adjustments to restore proper angulation, adaptation, and power of the stroke must be made to decrease the risk of burnishing calculus. These adjustments may include extraoral or alternative fulcrums, selection of different instruments, changing of clinician and/or patient positions, or fulcruming on the side of the ring finger rather than the pad.

Maintaining proper pressure of the instrument blade against the tooth during calculus removal involves the thumb, middle finger, and index finger on the instrument, as well as a stable fulcrum to transmit the power of the stroke from the forearm and hand onto the working end.16Determining the primary source of the lateral pressure during a working stroke depends on the surface being treated, instrument in use, fulcrum, and the clinician’s position.

As described earlier, both the grasp and fulcrum of a practitioner with JH can be compromised. Hypermobile joints cause decreased lateral pressure when they fatigue or collapse on either the grasp or the fulcrum. Lack of adequate pressure can result in residual burnished calculus on root surfaces. Attaining the proper varied lateral pressure required for instrumentation may require assistance from the nondominant hand. Reinforcing the instrument with the index finger or thumb of the nondominant hand can increase the power, sustained pressure, and precision needed during instrumentation (Figure 7).16,19,20

Skillful use of ultrasonic instrumentation for initial removal of heavy or tenacious calculus is advantageous to dental hygienists with JH. Conscientious efforts should be made to fracture and remove as much calculus as possible before finishing with hand instruments in order to avoid overstressing lax joints with excessive pressure.

Dental hygienists with JH may experience significant problems during their careers. Informed practitioners should self-identify the presence of this condition and recognize its potential impact on the musculoskeletal system and the effectiveness of periodontal instrumentation. Incorporating alternative techniques can reduce the clinician’s risk of injury and improve patient outcomes.

Joyce Y. Sumi, RDH, MS, is an associate professor of clinical dentistry in the Department of Dental Hygiene at the University of Southern California (USC) Ostrow School of Dentistry in Los Angeles. She also practices in a private periodontal office and she holds an advanced perioscopy certification. Sumi co-authored the chapter on hand-activated instrumentation in the 4th edition of¾Darby and Walsh's Dental Hygiene Theory and Practice. She is the recipient of the 2012 University of California San Francisco (UCSF) Elizabeth Fuhriman Gardner Award and the UCSF Research and Clinical Excellence Award. 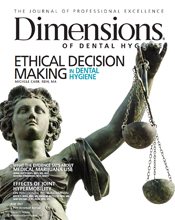