Research supports a variety of techniques to treat this common malady.

Dentinal hypersensitivity affects between 10% and 40% of adults in the United States.1 Pain arising from tooth sensitivity can range from mild to severe, the former acting as a minor annoyance and the latter disrupting daily activities. The ability to perform routine oral hygiene care can be hampered by dentinal hypersensitivity, and patients will often make intentional behavioral changes, such as dietary modifications, to avoid the pain.2 Dentinal hypersensitivity is more common among women than men, and typically affects the anterior and premolar teeth.3 The onset of dentinal hypersensitivity most often occurs among people in their 30s and 40s.4 There are many strategies available to address sensitivity. This article will focus on treatments that were investigated during a regional practice-based research study.5

In order for dentinal hypersensitivity to occur, the cervical location of the involved dentin must first be localized by the recession of the gingival margin and/or loss of enamel (Figure 1). Removal of dentin plugs or the smear layer via abrasion or erosion follows (Figure 2). The hydrodynamic theory is the most widely accepted explanation for dentinal hypersensitivity pathogenesis.6 The pain of tooth sensitivity results from fluids within the dentinal tubules becoming disturbed by temperature, physical, or osmotic changes. These fluid movements stimulate a baroreceptor, which leads to a neural signal. For example, a thermal stimulus applied to a cervical site with patent (open) tubules would cause contraction of dentinal tubules and fluid movement, resulting in depolarization of the nerve. Similarly, applied air to a site will desiccate the surface, resulting in outward flow of dentinal fluid in the direction of the dehydrated surface. This fluid movement depolarizes the nerve and generates a painful sensation. Acids, salts, and sugars also act as osmotic provocations to cause fluid movement and nerve firing. Consequently, the treatment of dentinal hypersensitivity focuses on two strategies—impeding the firing of nerves, and blocking the dentin tubules to hamper transmission of stimulus.

Fluoride is commonly used to manage dentinal hypersensitivity, either alone or with other compounds. Fluoride assists in partial or complete blockage of tubules by forming calcium fluoride or calcium-phosphorus precipitates. In dentifrices, fluoride is found in combination with other dentin-obstructing agents, such as potassium and oxalates.

There is debate about whether it is primarily fluoride that causes sensitivity relief or if the use of fluoride with other agents has the greatest effect. Evidence suggests that even the abrasive components of toothpaste may contribute to the occlusion of patent dentin tubules. Ritter et al7 conducted a randomized controlled study that found two chairside 5% sodium fluoride varnishes were equally effective in reducing the symptoms of dentinal hypersensitivity. The study used the visual analog scale (VAS) to record patients’ perceptions of pain. The test and control varnishes demonstrated 44% and 41% reductions in VAS scores, respectively. Both of the varnishes sustained improvements from a single application for up to 6 months. Other fluoride therapies that show promise in managing dentinal hypersensitivity include fluoride gel and stannous fluoride.8,9

The combination of 5% glutaraldehyde and 35% hydroxyethyl methacrylate (HEMA) is often used to treat dentinal hypersensitivity, and it can reduce the symptoms of sensitivity for up to 9 months.10 This compound reacts with the serum albumin in dentinal fluid, which leads to precipitate formation and subsequent narrowing or blocking of the tubules. Intratubular blocking via protein coagulation occurs to some degree.11

A dentin-bonding agent functions similarly to glutaraldehyde products by attempting to occlude patent dentin tubules. Adhesives produce statistically significant improvements in relieving sensitivity when compared to a baseline in randomized controlled trials that provide 1 week to 1 month of follow-up data. These short-term results are comparable to gains established with glutaraldehyde/HEMA products, though not statistically different.12,13 Bonding adhesives are readily available, and thus frequently used, to address sensitivity in clinical practice.

Potassium nitrate is a common ingredient in over-the-counter dentifrices and in-office products designed to reduce dentinal hypersensitivity. It increases extracellular potassium ion concentration, thereby depolarizing the nerve and inhibiting it from repolarizing. The literature regarding its efficacy is mixed.14 Potassium chloride (3.75%) and potassium citrate (5.5%) are used in desensitizing toothpaste formulations, with each providing 2% potassium ion—the essential desensitizing factor.

Fluoride, HEMA, bonding adhesives, potassium nitrates and strontium salts, and arginine-calcium carbonate are the most frequently used methods to treat sensitivity, according to an American practice-based survey.5 Clinical research has explored other modalities, such as the use of lasers and surgical root coverage. Low-level output lasers, such as helium-neon (HeNe) and diode types, likely function by interfering with nerve transmission. The uniformity of results, with a reported success rates of 5% to 100%, is shown in a meta-analysis.21 High-level output lasers, such as Nd:YAG and CO2 lasers, have also been evaluated in clinical studies. The ability of Nd:YAG lasers to generate light energy that contracts dentinal tubules is thought to be the mechanism of action. As with HeNe and diode lasers, the performance of high-level output lasers in relieving sensitivity symptoms is varied, according to a systematic review.22 The irradiation protocols in the above laser studies are different, and long-term efficacy has not yet been established. Additional well-designed parallel and randomized clinical trials are needed to support the efficacy of lasers in treating dentinal hypersensitivity.

Periodontal mucogingival surgery targeted at root coverage theoretically would prevent patent tubules from exposure to stimulus. Unfortunately, patient-based outcomes, such as improvements in pain symptomology, are not consistently reported in clinical studies on root coverage. Periodontal mucogingival surgery cannot be considered a predictable procedure to reduce dentinal hypersensitivity symptoms based on the low number of available randomized control trials.23

The management of dentinal hypersensitivity should first seek to eliminate other competing diagnoses that might account for a patient’s symptomology. Alternate causes for sensitivity include caries, fractured/chipped teeth, and faulty restorations. Clinicians should also consider recent dental treatment, evaluating for sensitivity after restorative therapy and scaling and root planing.

Next, clinicians should address any contributing factors to the dentinal hypersensitivity. For example, proper oral hygiene instructions should be taught to combat overzealous brushing. Clinicians may need to provide dietary counseling to manage erosion caused by acidic food. Some dietary sources, such as red wine or acidic juices, for instance, can remove the smear layer and produce patent tubules.

Minimally invasive strategies, such as anti-sensitivity dentifrices and mouthrinses, should also be considered. These at-home treatments tend to treat general regions (multiple teeth/arch) of exposed cervical dentin nonspecifically. Simultaneously, oral health professionals should encourage patients to keep a “symptom diary” that documents specific triggers. An intermediate strategy prior to in-office treatment is the use of at-home prescription fluoride products. With these initial strategies exhausted, the next step involves in-office applications of products to defined cervical regions.

The current body of clinical research does not offer overwhelming support for one treatment modality vs another in the management of dentinal hypersensitivity. Nonetheless, careful development of a treatment plan that includes at-home and professionally applied strategies should be based on the best available evidence. Oral health professionals are encouraged to formulate decisions using both evidence and personalized care.

Harlan J. Shiau, DDS, DMSc, is a faculty member in the Department of Periodontics at the University of Maryland School of Dentistry in Baltimore. He is the director of predoctoral periodontal education and teaches courses on clinical assessment, treatment planning, implant prosthodontics, and periodontal instrumentation. Shiau is a diplomate of the American Board of Periodontology and serves as an officer for the periodontics section of the American Dental Education Association. He has lectured locally and nationally on dentinal hypersensitivity, peri-implantitis, periodontal medicine, and dental education. 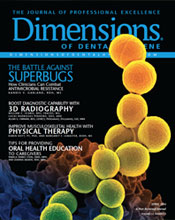