The pros and cons of digital radiography in the dental operatory.

A digital radiograph is acquired from the image receptor to the computer monitor either directly or indirectly. Direct digital imaging includes charge coupled device (CCD) and complementary metal oxide semiconductor (CMOS) sensor technology. CCD and CMOS sensors contain a grid composed of pixels, which have the same function as silver halide crystals within film emulsion. Pixels are arranged in a particular location and are assigned a number that represents the gray value; this determines image contrast. The more pixels, also known as “picture elements,” the sharper the final radiographic image will be. The pixels capture electrons in the individual wells of the grid and are converted to an image when exposed to ionizing radiation.1,3 CCD and CMOS sensors can be manufactured with a cord or wireless.1

>Indirect digital imaging uses photostimulable phosphor plates (PSPs) in a scanning process to produce the image after exposure. PSPs are wireless plates coated with polyester and a storage photon.4 The X-ray photons capture and store the image until matched with a helium neon laser, which exposes the latent image on the wireless plate, similar to the way film is developed after exposure to ionizing radiation.3

Because the plate is the same size and thickness as traditional film, patients tolerate it well, which reduces clinician error. While the PSP process is faster than traditional film, it is the slowest type of digital radiography because scanning the polyester plates requires an additional step.3 The plates can also be damaged easily because they are flexible, unlike the rigid sensors used in CCD or CMOS sensor technology. Clinicians are unable to determine that a PSP plate has been damaged until after the scanning process, which results in retaking the image and added radiation exposure for the patient.3

Digital receptors should be covered with a plastic sheath or barrier compatible with the specific size and manufacturer of the receptor. If an image receptor is placed intraorally without a protective sheath, the receptor should no longer be used because it cannot be sterilized. Replacement of direct digital sensors cost between $6,000 and $12,500.2,3 One study found that some plastic barrier sheaths leaked when used in direct digital radiography. Of the sensors tested, 44% of the the plastic barrier sheaths leaked when used alone, while only 6% of the sensors that used a double barrier system consisting of a latex finger cot and plastic barrier sheath experienced leakage.5 In PSP indirect digital imaging, no studies have been conducted on the tolerance of the plates to wiping with an intermediate level disinfectant.6 While the plates are covered with barriers to fit the various receptor sizes, wiping them down with disinfectant reduces disease transmission.6 The use of a double barrier system for plates and sensors may become standard protocol as further research is conducted. Until then, the double barrier system should be used when digital radiographs are taken during invasive procedures, such as implant or periodontal surgery.5 Future research is needed to determine if intermediate disinfectants cause harm to PSP technology or if the double barrier system should be recommended.

Digital radiographs are more time efficient, saving approximately 30 minutes per day compared to analog methods, mostly because film processing is no longer necessary.6 Direct digital radiographs are typically displayed on the computer screen in 0.5 seconds to 120 seconds after exposure.4 Wireless sensors require even less working time.6,7 Wireless sensors, however, are thicker and communication to the computer is sensitive to surrounding electronic signals.4 While working time may be gained when using direct digital radiography, the technique may lead to a higher number of retakes.6 Research comparing the number of retake images necessary with a CCD sensor and PSP showed that 20% fewer retakes were necessary with the PSP.8

Reducing the amount of radiation exposure when using digital radiographic systems may be the largest reported advantage over film-based methods (see sidebar on addressing this topic with patients).9 Radiation reduction, however, is not as significant as many clinicians think because current film speeds require less radiation than older film speeds.4 For example, radiation is reduced 60% when the faster F-speed film is used compared to the slower D-speed.10

D-speed film is no longer recommended in the dental setting, although it is still used because some clinicians believe it provides a higher quality image.10,11 On average, radiation is reduced between 50% and 55% with digital imaging as compared to E-speed film.9 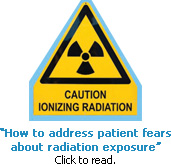 Additional factors affect the amount of radiation received by patients. Clinicians who use digital radiography tend to take more X-rays because of the ease of retaking images and the small size of the sensors, which increases patients’ exposure.1,9 Also, many “acceptable” digital intraoral radiographs are not always the “preferred” image density.8

Many dentists prefer viewing images that need a higher exposure time, kilovoltage (kVp) and millamperage (mA), which results in increased radiation exposure to patients.9 Clinicians may be unfamiliar with the adjustments necessary for digital radiography such as: kVp, mA, and impulse settings.9,12 Digital radiographs are best taken with low kVp (60), mA (5), and using an X-ray unit that incorporates direct current rather than alternating current.4 Keeping the radiation dose as low as reasonably achievable should be the clinician’s goal in digital radiography.

Research comparing sensors, PSPs, and film with exposure of third molar periapical images concluded that all the digital sensors were more uncomfortable than film and PSPs.6 A study examining wired sensors, wireless sensors, and film found no difference in reported patient comfort between the sensors, yet participants reported film as the most comfortable radiographic procedure over the wired and wireless sensors.7 Overall, wired direct digital sensors were reported as the most uncomfortable digital receptor, while PSPs were noted as the most tolerable.7 Exposing radiographs using the technique that is the most comfortable for patients will result in a reduction of retakes and high diagnostic yield.13

Radiographic image quality is integral to diagnosing dental disease. Dental professionals have differing opinions about density, contrast, and viewing conditions for diagnosing disease. Almost 90% of interproximal lesions are detected through bitewing radiographs and clinical examinations, while clinical examinations alone account for approximately 50% of detected caries.14 Many studies have assessed the interpretation of digital versus conventional film-based bitewing radiographs, demonstrating no difference between the diagnostic capabilities in detecting dental disease.15 Differences in interpreting results between film and digital radiographs can be attributed to human error.6

Research comparing viewing conditions on computer screens has found no significant difference in diagnosing caries. When images were viewed on a desktop computer versus a laptop or using expensive high-resolution monitors, no difference in diagnosing dental disease was found.6 When comparing hooded monitors for detecting caries to a laptop with strong lighting, fewer carious lesions were diagnosed with the laptop, demonstrating that a dim overhead light is best for detecting caries.6

Earlier research showed that computer programs assisting the interpreter in locating caries were less accurate than the human eye,16 yet research reports that software with the ability to perform digital subtraction has higher interobserver agreement in the diagnosis of dental caries than when comparing two films.17 Digital subtraction is a software function that compares two images by removing all identical features and highlighting the differences. This function can also be useful when comparing images of bone levels to determine if the periodontal condition has worsened or remained stable.4 Future computer-aided interpretation may be helpful to assess trabecular bone patterns and screen for osteoporosis.18
While many theories support the idea of using computers to digitally enhance the dental practice, technology can be a concern in itself. Due to the rapidly moving pace of technological advancement, computers are considered outdated after 6 months of purchase. This will be problematic if digital images cannot be viewed on the next generation of computers in 5 years to 20 years.19 Further investigation is needed to determine whether today’s digital radiographs will be compatible with technology marketed in the future.

Digital images are not conducive to every office, and advantages and disadvantages should be explored. However, digital radiography may provide significant benefits for both practitioners and patients. Although initial set up of the digital process is expensive, these long-term advantages must be taken into consideration.

Ann M. Bruhn, RDH, BSDH, MS, is an associate professor and chair of the Gene W. Hirschfeld School of Dental Hygiene at Old Dominion University (ODU) in Norfolk, Virginia. She is a frequent contributor to peer-reviewed journals, is co-author of Exercises In Oral Radiography Techniques: A Laboratory Manual, and has written several textbook chapters. Bruhn received funding to examine innovative strategies for the exposure of high-quality radiographic images on post-mortem remains in mass fatality events among other internal and external funding awards. She has disseminated research through national and international presentations and conducted continuing education courses at national conferences. Bruhn is also a member of Dimensions of Dental Hygiene’s Peer Review Panel.

Tracee S. Dahm, BSDH, MS, RDH, is a clinical instructor for the North Idaho College School of Dental Hygiene in Coeur d’Alene. She also works in private practice. Dahm’s research interests comprise improving access to dental care for the underserved, radiology, cultural diversity, and trends in dental hygiene. She is a member of Dimensions of Dental Hygiene’s Peer Review Panel.

Details Make All The Difference 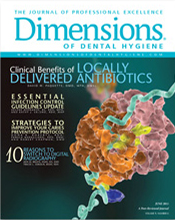