The Battle Against Bacteria

Dimensions of Dental Hygiene speaks with Rebecca Wilder, RDH, BS, MS, about biofilm and periodontal disease and the use of chemotherapeutic agents in the fight against them.

Q. Describe the shift in focus from bacterial plaque to the new term “bacterial biofilm.”

A. The evolution of dental plaque has profoundly affected dentistry today. Dentistry is at the start of understanding how important plaque is in the advancement of periodontal disease. Biofilm is a complex group of self-sufficient bacteria living together that adheres to a surface and is resistant to traditional antibiotics. In nature, biofilm is the main method of bacterial growth. Microbial species live in these communities of attached bacteria in biofilm, but they also discharge free-floating single cell bacteria. Biofilm bacteria are significantly more resistant to antimicrobial agents than the dispersed single cell bacteria of the same species, which may be why some bacterial infections are resistant to antibiotic treatment. The growth of knowledge about biofilm has engendered more questions than answers. Clearly, controlling plaque is not enough to combat periodontal disease.

Q. How has this new understanding helped dental hygienists better treat their patients?

A. What we know about biofilms now is that they are extremely difficult to eradicate. We are relatively sure that physical disruption is the best technique at this time to disrupt biofilm formation and growth. To what degree the disruption is needed, we do not know. Removing subgingival calculus is still a major goal of periodontal therapy. Calculus is not an etiology for periodontitis but it still contributes to disease by allowing bacteria to adhere and develop mature biofilms.

Q. Why do some patients seem more resistant to periodontal disease?

Unfortunately, there is not a complete understanding of the role of the host response. No single factor can predict the severity of disease. Current research is exploring the intercommunication between the microbial flora and the host as the main determinant of disease severity. But the role of the host response in increasing susceptibility is still not clear. Biochemical markers, however, do appear crucial to regulating connective tissue destruction and clinical disease. The most serious periodontal disease seems to generate the highest level of inflammation when challenged bacterially, which may be why patients with the same levels of plaque experience different levels of severity in their disease.

Arestin, OraPharma Inc, Warminster, Pa, or minocycline microspheres is the newest product on the market, receiving Food and Drug Administration (FDA) approval in 2001. Arestin is a subgingival sustained release product that contains the antibiotic minocycline hydrochloride, which is incorporated into a bioresorbable polymer for professional subgingival administration. It delivers minocycline in a powdered form into the pocket. Arestin is bio-adhesive, meaning it adheres to the pocket wall. As with all of the products, it is bioresorbable. Minocycline microspheres have been studied in one open label and two placebo-blind controlled clinical trials. The three studies included 921 subjects and more than 27,000 treatment sites. Minocycline microspheres with scaling and root planing (SRP) in pockets initially > 6 mm reduced probing depth to < 5 mm at 9 months in 65% of the sites, which was significantly better than SRP alone.1 Arestin was also shown to be effective with patients who smoke. Currently, Phase II clinical trials are underway to evaluate how Arestin performs in clinical practice. Minocycline has also been shown to release therapeutic concentrations into the gingival crevicular fluid following administration for at least 14 days.2

Q. Does this explain why some patients don’t respond as well to traditional periodontal therapies?

A. Patients respond differently to treatments, which is why the role of assessment and evaluation is so important in dental hygiene care. Most patients will respond to thorough debridement but some will not. Fortunately, the treatment options available are excellent adjuncts to mechanical therapy.

Q. What are locally delivered antimicrobials and antibiotics and why are they used?

A. Local delivery is the delivery of an antimicrobial or an antibiotic to a local site in a periodontal pocket with the goal of improving the periodontal health of the site. There are several reasons why locally delivered products are used. One is because mechanical therapy does not remove all of the bacteria from the tooth and root surface, regardless of the skill level of the dental hygienist or dentist. Mechanical therapy is necessary for the disruption of biofilm. However, some bacteria still remain in the periodontal pocket. Local delivery products kill or suppress the level of bacteria for an extended period of time. Another reason is because chronic periodontitis cannot be cured but it can be controlled. Periodontitis can be managed in some patients with routine debridement and SRP but some patients need other therapies to control it. Research shows that after a SRP appointment, bacteria levels start to reach prescaling levels within 8 to 11 weeks.3 Antibiotics and antimicrobials extend the length of time between appointments because the drug is inhibiting or killing the bacteria. The combined approach to therapy may increase the effectiveness of treatment for the patient with chronic periodontitis.

A controlled release product, Atridox, CollaGenex Pharmaceuticals, Newtown, Pa, is composed of a two syringe mixing system. The active ingredient in Atridox is 10% doxycycline hyclate, which is a broad spectrum antibiotic. Upon contact with crevicular fluid, the gel product solidifies and allows continuous release of doxycycline for 7 days. This product has been shown to be safe with no overgrowth of foreign pathogens and only transient increases in resistance of the oral microflora.6

Approved by the FDA in 1998, Atridox was the first antibiotic to be studied as a stand alone product as compared to SRP. The SRP group was comparable to the group that received Atridox. However, research on biofilm has shown that disrupting the biofilm with mechanical therapy is necessary.7 Therefore, local delivery is considered an adjunctive therapy to SRP, not a replacement. Recent studies have evaluated Atridox’s effect as an adjunctive therapy with periodontal debridement and found it to be effective.8 A recent change with Atridox is that it no longer needs refrigeration. It can be stored at room temperature from 36° to 86° F for 24 months.

Q. What properties are integral to the efficacy of locally delivered antimicrobials and antibiotics?

A. The drugs that are available today all share one very important characteristic—they deliver the agent to the base of the pocket where the damage is occurring. They also all have concentrations strong enough and the sustainability to kill or inhibit bacteria for an extended period of time. They are easy to place, provide good retention in the pocket, and are biodegradable.

Q. Is local anesthesia required for these therapies?

A. Typically, local anesthesia is not required for placement of local delivery agents. In placing these products in various patients, I have found very few who need it. It is not a painful procedure. The technique used for placement can vary depending on the size of the pocket and the tightness of the tissue around the tooth but overall placement is not difficult.

Q. Can more than one application of the product be placed on a single tooth in multiple sites?

A. For a tooth with multiple pockets or a patient with multiple teeth requiring treatment, consult the product specifications for usage and dosage. Each product has unique instructions. In general, multiple sites can be treated at one appointment.

PerioChip, OMNII Oral Pharmaceuticals, West Palm Beach, Fla, is a biodegradable hydrolyzed chlorhexidine chip that is 4 mm x 5 mm in diameter. It contains 2.5 mg of chlorhexidine, which is a broad spectrum antimicrobial agent. Its size requires that it be placed in at least a 5 mm pocket. Truly all of these drugs are intended for pockets that are at least 5 mm, which is typically considered chronic periodontitis.

PerioChip no longer needs refrigeration. The chip is placed with cotton pliers with one chip per pocket. The initial studies4 found that a chip can be placed in less than 1 minute by most clinicians, making it cost effective. Most of these treatments can be done during the appointment, eliminating the need for a second appointment. Clinical studies of PerioChip demonstrated that it significantly reduced probing pocket depths in pockets 5 mm to 8 mm when compared to SRP alone.5 PerioChip releases chlorhexidine for approximately 7 days at levels that will kill the majority of bacteria.

The development of a resistance to chlorhexidine is uncommon. There has been no indication of any overgrowth of organisms with any of the products that are presently on the market. The other change with PerioChip is that it is now available from OMNII Oral Pharmaceuticals.

Q. Are there any precautions for using local delivery agents?

A. Doxycycline and minocycline microspheres should not be used in patients with a known sensitivity to minocycline or tetracycline. Local delivery agents have not been clinically studied in pregnancy. Tetracycline drugs should not be used in children under 8 years of age or in pregnant or nursing women unless the potential benefits are considered to outweigh the potential risks. Clinical and laboratory studies to date have not shown any evidence of microbial resistance to the drugs. Regarding PerioChip, development of resistance to chlorhexidine is uncommon. No overgrowth of opportunistic organisms or other adverse changes in the oral microbial ecosystem were noted in studies with PerioChip.5

Are there specific instructions for treatment after placement?

With PerioChip, the patient should avoid flossing treated areas for 10 days. Other oral hygiene procedures can be continued. Atridox patients should avoid brushing and/or using interdental devices in treated areas for 7 days. Arestin patients should not brush the treated area for 12 hours and avoid interdental devices for 10 days post-treatment. Patients should not eat hard, crunchy, or sticky foods for 1 week. If patients have any kind of mild or moderate sensitivity with any of the products, they can take an analgesic. Although uncommon, if patients have more severe problems or any swelling, they should contact their dental office immediately.

Periostat, Collagenex Pharmaceuticals, Newtown, Pa, is a systemic, lowdose doxycycline antibiotic (a tetracycline derivative). Traditionally, the focus of treating periodontal disease has been on controlling or suppressing the etiologic bacteria. Since the early 1970s, research has emerged regarding controlling the susceptible host or host modulation. One area of host modulation has focused on the role of chemically-modified tetracyclines, as inhibitors of collagenase (a collagen destructive enzyme), in the treatment of periodontal disease. Periostat is a systemic antibiotic that is given at a dose that will inhibit the enzymes that destroy periodontal support tissues but will not kill the bacteria. It is intended to be an adjunctive therapy to the traditional treatment for chronic periodontitis (SRP). In 2001, Periostat was granted the Seal of Acceptance by the American Dental Association (ADA). Periostat is a 20 mg tablet containing doxycycline. Traditional tetracycline contraindications, precautions, and warnings must be considered when using Periostat. Periostat was recently evaluated as part of a systematic review and consensus report from the American Academy of Periodontology.9 Periostat received the highest level of rating possible from a panel of periodontal thought leaders. The rating strongly supported the efficacy and safety of Periostat as an adjunct to conventional therapy in the management of chronic periodontitis.

On the Cutting Edge 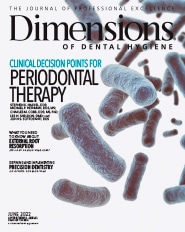