Calcium phosphate technologies may support the remineralization process, thereby helping to ensure the integrity of the tooth surface in the face of mineral loss.

Dental biofilm also plays a role in this process. When fermentable carbohydrates are consumed, the microorganisms in biofilm convert the carbohydrates into organic acids, such as lactic acid (Figure 1), which lowers the pH in the mouth. This is the start of the demineralization process, which can lead to softening of the enamel and caries.1 When the pH in the oral cavity is increased through saliva’s natural buffering system, the absence of fermentable carbohydrates, and the availability of minerals, the scale tips toward remineralization, and the integrity of the tooth surface is maintained. By sustaining conditions favorable to the remineralization process in the oral cavity, replacement of lost dental enamel is feasible.2

Though the prevalence of dental caries has declined among certain populations, tooth decay remains an oral health concern. Although rates of untreated dental caries have decreased significantly since the early 1970s, they have remained steady since the late 1980s and early 1990s (Figure 2). Between 2001 and 2004, 19.5% of children age 2 to 5 and 22.9% of children age 6 to 19 experienced untreated tooth decay.3 The prevalence is much higher among minority populations, especially Mexican-Americans, and those of low socioeconomic status.3 Caries is preventable and much research has been done into risk assessment, early detection methods, and noninvasive treatment options. Many strategies are available to tip the scales toward remineralization—from topical fluoride use to reducing exposure to fermentable carbohydrates. Table 1 provides a summary of appropriate adjunct remineralization therapies for individuals at increased caries risk.4 Calcium phosphate technologies, a relatively recent innovation, have shown promise in their ability to boost remineralization.1

THE ROLE OF CALCIUM PHOSPHATE TECHNOLOGIES

CPP-ACP is derived from casein, which is part of a protein found in cow’s milk. It binds to fluoride and bacteria in the oral cavity and stabilizes ACP, thereby providing a reservoir of calcium and phosphate ions to boost the remineralization process. Limited research demonstrates that CPP-ACP may interfere with the demineralization process and support the remineralization process by increasing calcium and phosphate ion levels in dental biofilm, supporting remineralization of enamel, slowing the development of coronal caries, and providing some level of protection in an acidic environment. 8–10 CPP-ACP comes in a paste (with or without fluoride) that is applied topically to the teeth once or twice daily, in addition to fluoride varnish and chewing gum.7 Because CPPACP is derived from milk protein, patients who are allergic to dairy should avoid its use.

When exposed to saliva, CSP—a bioactive glass—releases ions of calcium, phosphate, and sodium.11,12 The calcium and phosphate ions are buffered by the sodium ions, which precipitate into hydroxyapatite in order to fill demineralized defects.12,13 CSP is found in toothpastes, a prophy paste, desensitizing agents, and, most recently, in an air polishing powder.7 CSP is most commonly used as a desensitizing ingredient.12,13 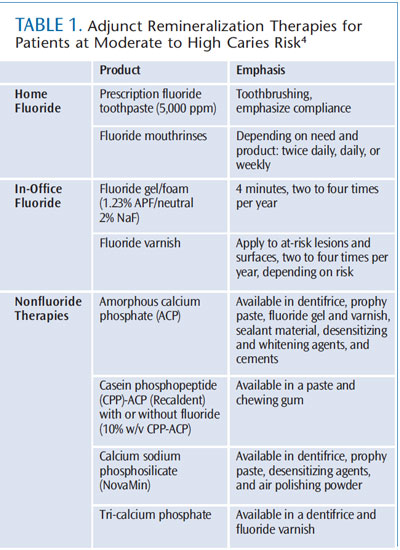 TCP is a consolidation of beta tri-calcium phosphate and sodium lauryl sulfate that creates a “functionalized” calcium and a “free” phosphate, which work with fluoride to support the remineralization of enamel subsurface lesions. A shielding barrier is formed around the calcium, allowing it to exist collectively with fluoride when added to toothpaste.14 TCP is available in a prescription-only dentifrice and fluoride varnish.7 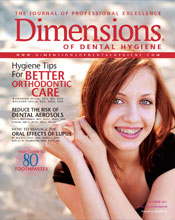