Maintaining oral health may be more effective than antibiotic prophylaxis in reducing the risk of bacteremia.

By Gen Benoit, RDH, MEd, Ruth Tornwall, RDH, MS and Frieda Atherton Pickett, RDH, MS On Jan 19, 2012 1
PURCHASE COURSE
This course was published in the January 2012 issue and expires January 2015. The authors have no commercial conflicts of interest to disclose. This 2 credit hour self-study activity is electronically mediated.

Bacteremia (BAC) is the presence of bacteria in the bloodstream—a normally sterile environment. People in good health rarely develop BAC because their immune systems eliminate the potentially-harmful bacteria. However, when bacteria are introduced directly into the circulatory system, especially in a person who is ill, immunocompromised, or undergoing aggressive medical treatment, the immune system may not be able to cope with the invasion, and symptoms of BAC may develop.1-3 These include fever and other signs of infection. In some cases, BAC may lead to septic shock, a potentially life-threatening condition.

Bacteria can enter the bloodstream in a multitude of ways, such as infection, surgical procedure, injection, contamination due to catheters and other foreign bodies entering the arteries or veins, or the performance of daily life activities.1,2 Among those at elevated risk of BAC, benign activities such as toothbrushing, flossing, using toothpicks or oral irrigating devices, and chewing can cause BAC (Table 1).1-3 Medical or dental treatment may introduce new, more invasive types of bacteria than those associated with a normal flora—further increasing the likelihood of bacterial infection.

Antibiotic prophylaxis used to be the recommended protocol before performing dental procedures on patients at risk of BAC. New information has cast doubt on this theory and the American Heart Association (AHA) has adjusted its antibiotic prophylaxis guidelines. The most effective strategy for preventing BAC may be maintaining good oral health and receiving consistent professional oral health care. As such, oral health care professionals should understand the relationship between oral health and bacteremia so they can best advise their patients and make the safest treatment decisions.

BAC plays a role in two serious infections—infective endocarditis and prosthetic joint infection. Infective endocarditis is a severe and potentially deadly infection of the endocardium, a thin membrane that lines the inner surface of the heart (Figure 1).1 Infection results when the endocardium, and possibly the heart valves and septum, are colonized by a microbial agent. This infection leads to the formation of bulky, friable vegetations and destruction of underlying cardiac tissues. Staphylococcal organisms are thought to be the leading cause of infective endocarditis, with Streptococci and Enterococci as the other two most common causes.4,5 Additional contributing bacterial agents include Haemo philus species, Acti nobacillus actinomycetecomitans, Cardiobacterium hominis, Eikenella corrodens, and Kingella kingae—also known as the HACEK group—which are commonly found in the oral cavity.5 Yeast, fungi, and viruses can also play a role in the initiation of infective endocarditis.

The causative agents for infective endocarditis differ among high risk groups. For example, Staphylococcus aureus is the primary causative organism for infective endocarditis among intravenous drug users while prosthetic heart valve infective endocarditis is most often initiated by S. epidermis, Gram negative Bacilli, and Candida.5
Prosthetic joint replacements are used to manage destructive joint disease. Artificial joints are placed to decrease pain and improve function (Figure 2). Bacteria that cause prosthetic joint infections are not easily eliminated and often result in the replacement of the prosthetic joint.6 A number of microorganisms have been implicated in prosthetic joint infections, including coagulase-negative Staphylococci, S. aureus, Streptococci, Gram-negative Bacilli, Enterococci, and anaerobes. In some infections, no micro organisms are detected.7-9 To date, there is no clinical or laboratory test that can diagnose prosthetic joint infection specifically and accurately.6 In order to achieve an accurate diagnosis, a combination of clinical symptoms, blood tests, histopathology, radiography, bone scans, and a microbiological work-up must be used.

Infection results when pathogenic organisms multiply and cause an inflammatory response around the implanted device, which can damage adjacent tissue. Some strains of coagulase-negative Staphylococci produce a polysaccharide biofilm that encourages the adherence of bacteria to foreign objects and protects them from host defenses and many antibiotics. If bacteria are present on an intravascular surface, they can spread through the bloodstream, causing metastatic infections.3,5 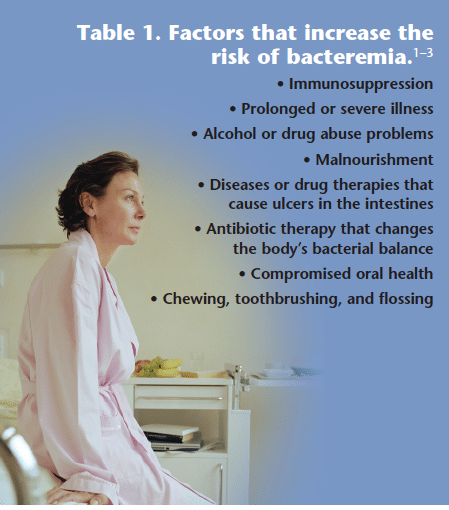 There is little research available on the role of oral hygiene and BAC, and studies that have been completed reveal conflicting results. However, it is generally agreed that effective oral health practices reduce the risk of BAC. The AHA announced that its former infective endocarditis guidelines focused too much on the use of antibiotic prophylaxis before dental treatment and underemphasized the need for effective oral hygiene regimens and routine professional dental care.10,11

The role of oral hygiene and oral health in BAC detected after oral surgery has been studied. Some research found a greater prevalence of BAC among patients with poor oral health12,13 while others reported no difference.14 Few randomized, controlled trials (RCTs)—the gold standard of evidence-based decision-making—have been conducted on the role of oral health in reducing BAC.

In 2008, Lockhart et al completed an RCT on endocarditis-related BAC among 290 subjects. Study participants were divided into three groups: those who toothbrushed only, those who underwent a single tooth extraction with antibiotic prophylaxis, and those who received a single tooth extraction with a placebo.12 Bacterial cultures were taken from all subjects via blood draw six times during the study: at baseline before toothbrushing or extraction; during and immediately after toothbrushing or extraction; and 20 minutes, 40 minutes, and 60 minutes after toothbrushing or extraction. The authors measured participants’ oral hygiene levels, calculus levels, and gingivitis and periodontitis conditions. Of 98 species of bacteria identified in blood cultures, 32 were infective endocarditis-associated. Of those 32 species, 31% were Streptococci commonly found in the mouth. Of all the subjects in the study, only one in the toothbrushing group had a positive blood culture at baseline.

In the extraction group, neither the level of oral hygiene nor the gingival or periodontal health of the tooth to be extracted was associated with an increased incidence of BAC. The results suggested that even though antibiotic prophylaxis had a significant impact on BAC resulting from single tooth extraction, the common occurrence of BAC following frequent oral hygiene procedures may be a greater concern for individuals at risk of infective endocarditis. In the toothbrushing group, good oral hygiene and gingival health resulted in a reduced level of BAC, which may translate into a reduced risk of developing infective endocarditis.12

No significant association was found between oral hygiene status or disease status of a specific tooth and BAC after extraction. The authors concluded that improving oral and periodontal health may help patients reduce their risk of infective endocarditis.13

Crasta et al investigated the incidence of BAC following flossing in a small nonrandomized study conducted in 2009.14 They compared subjects with chronic periodontitis to those with healthy periodontium. After baseline blood samples were obtained, each subject’s teeth were flossed in a standard manner, and blood samples were again taken at 30-second and 10-minute intervals. Of the healthy subjects, 41% tested positive for BAC while 40% of the participants with periodontitis tested positive. At the 10-minute test, BAC remained in 20% of subjects. Authors concluded that flossing caused BAC in both the healthy and periodontally involved patients at the same rates as other dental procedures for which antibiotic prophylaxis is recommended.14

BAC has been reported in two small nonrandomized studies among the subjects in the “healthy” group following oral procedures. Forner et al studied BAC in healthy periodontium vs gingivitis or periodontitis.15 Blood samples were taken at baseline, after chewing, and after toothbrushing. BAC in the periodontitis group was not statistically different from that of the healthy group or the gingivitis group. After scaling, the magnitude and incidence of BAC were both significantly higher in the periodontitis group, however, there were no significant differences between any of the groups at 10 minutes or 30 minutes post-scaling.15

Another study where BAC developed in the healthy group was completed by Kinane et al.16 In this single-blind study, BAC mainly occurred in healthy and gingivitis groups, rather than the periodontitis group.16 Thirty subjects who exhibited untreated periodontal diseases were tested for BAC several times in a 2-week period. BAC evaluation began with a baseline blood test that was repeated after periodontal probing and charting.

Research shows that poor oral health contributes to transient BAC caused by daily activities, such as toothbrushing, flossing, and eating.10,13 While antibiotic prophylaxis reduces BAC after invasive dental extractions, BAC has developed when antibiotic prophylaxis was implemented.13 These findings suggest that maintaining good oral health and performing effective, daily oral hygiene may be the best strategies to reduce BAC and, in susceptible individuals, both infective endocarditis and prosthetic joint infection. As antibiotic use is accompanied by inherent risks, maintaining oral health as a strategy to prevent or reduce BAC is a logical and safe alternative.

Gen Benoit, RDH, MEd, is an associate professor and supervisor of the dental hygiene program at Louisiana State University School of Dentistry in Lafayette. She is a frequent continuing education lecturer for both dental hygienists and dental assistants. Benoit serves on the board for Acadiana CARES, which provides HIV prevention education and care for those living with HIV/AIDS in the greater Lafayette region. 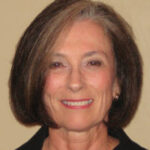 Ruth Tornwall, RDH, MS, began teaching in 1980 at Lamar Institute of Technology in Beaumont, Texas, where she now serves as an associate professor in the dental hygiene program. She teaches periodontology, community dentistry, and orofacial anatomy, histology, and embryology courses. Tornwall is also an instructor in preclinical and clinical courses.

Frieda Atherton Pickett, RDH, MS, is an adjunct associate professor in the graduate division of the Department of Dental Hygiene, Idaho State University in Pocatello. Pickett has been active in dental hygiene since 1966 as a clinician, educator, and author, and has served in leadership roles with numerous professional associations. She is also a member of Dimensions of Dental Hygiene's Editorial Advisory Board.

The Possibility of Pulsation

Educate Your Patients About HPV 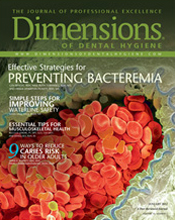