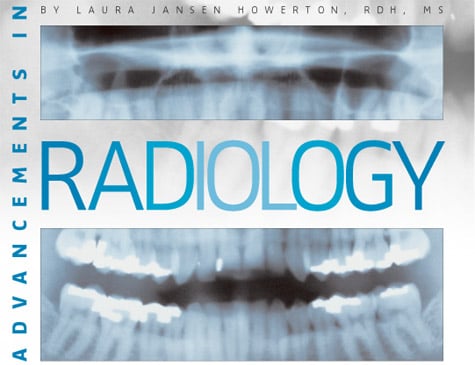 New technologies have simplified and improved the radiographic process while reducing its risks.

The short, pointed, plastic cone, long exposure times, the humid darkroom and tanks, the chance of contaminating the solutions, and the timer needed to avoid over-development—do any of these bring back memories? Fortunately, times have changed. New technologies in digital imaging—from faster film speed to digital intra-oral photography—have made the process much simpler and safer.

Digital imaging is a filmless technology that uses a sensor and computerized imaging system to produce the radiographic image on a monitor. The images produced are diagnostic and used to identify many conditions that may otherwise go undetected.1

Standard intra-oral film is coated with an emulsion that reacts when struck by radiation. A latent image is produced when the radiation interacts with the silver halide crystals in the emulsion, which eventually transforms into a visible image once the film is immersed in the processing solutions. These film-based images are called analog images and contain a continuous spectrum of gray shades between areas of black and white.2 Alternatively, digital images are obtained when radiation interacts with the small detector placed intra-orally to capture the radiographic image called the sensor. The patient is exposed to radiation in the same manner as conventional radiography, but the resultant image is viewed on a computer monitor instead of radiographic film. Data acquired by the sensor are communicated to the computer in analog form and then converted into digital form.

The analog image is converted into digital format by an analog-to-digital converter (ADC) in the computer. The amount of electrical signal picked up by the sensor is directly proportional to a number for each picture element or pixel on the monitor. Unlike the randomly arranged crystals in film emulsion, the sensor has ordered rows and columns composed of picture elements or pixels. Computers are based on binary systems that include two numbers: zero and one. For each pixel, the number of possible gray scale combinations is 2N; this is a bit depth image. For example, an eight bit depth image has a gray scale combination of 28, which equals 256 shades of gray.

Once converted to digital format, the radiographic images can be stored permanently in the patient’s electronic record, printed as a hard copy, or transmitted electronically to other dentists, specialists, or insurance companies. The Health Insurance Portability and Accountability Act (HIPAA) is designed to standardize the way all health care organizations electronically exchange patient data and to protect patients from unauthorized disclosure of their medical records. As a result, electronic transmission of patient data must conform to HIPAA policies. Because they can be manipulated by imaging software, digital images are dynamic. The ability to alter the gray scale per pixel is a tremendous advantage, while conventional radiography results in a permanent, fixed image that is irreversible. Currently, two options exist for producing a digital image: the direct and indirect method.

Three components are necessary to produce a direct digital image: a source of radiation, a sensor, and a computer. Digital systems are capable of using the conventional x-ray tube heads with a lower exposure time. An electrical wire links the intra-oral sensor to the computer; therefore, the sensors used in direct imaging are termed wired. Sensors vary in thickness from 3 mm to 8 mm, and are thicker and more rigid than conventional film. Since the wire attaches the sensor to the computer, the range of motion may be limited due to the length of the wire.1 Infection control may also be a concern because the sensor and portions of the wire need to be covered with disposable plastic to prevent cross-contamination. Once the sensor is exposed to radiation, the image instantly appears on the computer monitor.

Another form of indirect digital imaging uses photostimulable phosphor technology. This digital system also uses a conventional dental x-ray unit as the source of radiation. Reusable plastic plates coated with phosphor are exposed to radiation, much like conventional film. No wire is needed to connect to the computer. After exposure to radiation, the photostimulable phosphor plates (PSP) are placed into a laser scanning device. During the scanning process, the phosphor atoms on the plate emit a blue light that is proportional to the amount of radiation exposed to the portion of the plate. A photo-multiplier tube receives the blue light and produces an electronic signal that is sent to the ADC for conversion to digital numbers. The length of time needed to scan the PSP plates vary from 30 seconds to 5 minutes. PSP plates are similar in size and flexibility to conventional film; the images can be erased when exposed to bright light.

Purchasing a new computer system for digital imaging may seem expensive and impractical, but the computer hardware requirements for digital radiography are easily satisfied by nearly any computer system on the market. These prices continue to decline as the technology improves.4 The cost, labor, record-keeping, and cleaning necessary to maintain chemical processors and a darkroom are eliminated. With digital radiographs, less money and time are spent on film, hazardous processing chemicals, and mounting, as well as the disposal of film.5

The digital image can be enhanced to improve viewing and compensate for less than optimal exposure variables, such as increased or decreased density. In addition, the image can be magnified without sacrificing original image integrity. Image enhancement can greatly facilitate both diagnosis and treatment procedures.6 Due to legal concerns about the altering of original images, most computer software will not permit a changed image to be saved unless it is labeled as a copy. Other systems identify altered images unnoticeably, making the deceptive modification of images impossible.

Communication between dental professional and patient is optimized since the patient can view the large image and recognize conditions once difficult to appreciate with a small film. Radiographic images can be sent electronically to specialists, referring dentists, or insurance companies almost instantly. The digital images are easily filed and/or retrieved from the hardware.

The initial cost of an imaging system may seem inaccessible. However, initial costs can also be high for film-based systems. The advantages of consistency of image quality, immediate access, and the ability of electronic storage and transmission more than justifies the transition to digital imaging.6

The bulkiness and rigidity of the sensors have been reported as a disadvantage because of patient discomfort. Even though film is larger in area than the sensor, it can flex and bend in the oral cavity. Imaging systems using a wire attached to the sensor may make it difficult for the patient to bite completely on the film holding device. Cross contamination and infection control is always a concern, especially with a wired sensor that cannot withstand autoclaving.

Many studies have been conducted to evaluate the diagnostic qualities of film-based versus digital images. Investigators have evaluated the ability to interpret dental caries, periodontal disease, and periapical lesions. Findings have concluded that film and digital imaging are not significantly different in their abilities to record dental disease.2

If a picture is worth a thousand words, then intra-oral digital photography may be of interest to you. As an alternative to traditional 35 mm photography, digital photography documents patient information and stores the pictures electronically.8 Displayed images are available immediately on the computer monitor or hard copies of the images can be printed. Digital photography is an excellent way to educate patients about various dental concerns, as well as documenting case progress with “before and after” images.

Images can be incorporated into patient education, treatment planning, communication with dental specialists via email, and archived in computerized patient records. In addition, various software programs allow the dental professional to edit and manipulate the image, such that patients can visualize cosmetic corrections including whiter or straighter teeth. Not only is digital photography important for esthetic procedures, but it can also play a valuable role in diagnosis and prevention.

Choosing the right digital camera for your dental practice can be a difficult decision. The website www.digident.com offers information on three types of digital cameras for dental use.9 When photographing the oral cavity, an important quality for the camera is its ability to resolve detail. Therefore, a camera with a higher resolution is preferable. Other desirable qualities include: focusing ability, color balance and replication, a quality flash, storage capacity, and service and support from the manufacturer.

Patient comfort is also important and new outer packages made with soft, round, cushioned edges that cover the perimeter of the film packet have been introduced. For those who are not yet ready to convert to digital radiography, the faster speed films and softer packaging are definite benefits for patients.

The lead apron and thyroid collar are used during radiographic exposure to limit the amount of radiation received by the patient. The flexible shield is placed over the neck, chest, and lap of the patient to protect the reproductive and blood-forming tissues from scatter radiation.1 Use of a lead apron is recommended for all radiographic exposures and is mandated by law in some states.

Some adverse effects of radiation may occur no matter how small the dose.3 Even though modern radiographic equipment has reduced the amount of radiation a patient receives, the potential for normal cells to convert to malignant cells is a possibility. In keeping with the As Low As Reasonably Achievable (ALARA) principle, the American Dental Association has recommended the following: “Although scatter radiation to the patient’s abdomen is extremely low, leaded aprons should be used to minimize patient’s exposure to radiation.”12

Lead aprons stop nearly 98% of scatter radiation from reaching the reproductive organs, while the thyroid collar prevents approximately 92% of exposure to this gland.3 For lead aprons to be effective, proper use and care are important. The aprons should not be cracked or damaged and should be handled with care, not folded. Manufacturer’s directions for handling and cleaning of the aprons should be followed.

Recently, aprons have been manufactured with a nonlead alternative that isenvironmentally friendly and much lighter in weight. These aprons have a wear resistant, microfiber front and a nonslip corduroy backing, while the apron itself is made from an alloy sheeting instead of lead. These “lead-free” aprons offer the same attenuation against scatter radiation as the traditional lead apron, yet each apron is approximately 50% lighter in weight. In addition, the aprons are 100% recyclable and are safer for patients and operators due to the elimination of the lead material.

Future advances in radiography will only continue to streamline this process. As these developments certainly improve patient comfort and safety and possibly compliance, dental hygienists need to stay on top of new products and techniques in the radiographic arena. 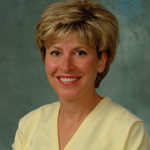 Laura Jansen Howerton, RDH, MS, has extensive experience in private practice both in general and faculty practice. She is a clinical associate professor at the University of North Carolina School of Dentistry, Chapel Hill. Her teaching interests include oral radiology, oral pathology, and dental anatomy. She is the co-author of the textbooks Radiographic Interpretation for the Dental Hygienist and Dental Radiography: Principles and Techniques. 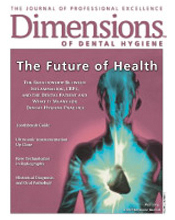