A behind-the-scenes look at fluoride and its role in preventing dental caries among young children.

Dental caries, the most common chronic disease of childhood, can be controlled with preventive practices, such as good nutrition, oral hygiene, and the use of fluoride, as well as other caries fighting agents like xylitol and remineralization therapies.1 Fluoride is a very important piece of the intricate prevention puzzle, and oral health professionals need to keep their knowledge base current.

Fluoride is the ionic form of the chemical element fluorine. It is a fairly common element in the earth’s crust, yet is essentially found in only three compounds: fluorite, fluorapatite, and cryolite.2 Fluorapatite is mined for its phosphate content and is used mostly in fertilizer. The byproducts of this process are used in water fluoridation, which is where the fear of fluoridated water originates. Interestingly, a growing number of pharmaceuticals (about 20%) contain fluorine, including Prozac and Lipitor—two of the most commonly prescribed medications today.3 Many medications are fluorinated to delay their metabolism and elimination from the body, thereby allowing longer duration between doses. Incorporating fluorine into medications also allows them to dissolve in fats and increases their bioavailability.3

Fluoride is only present in small amounts in the body, so it is considered a trace element. Fluoride is found naturally in almost every food group and in most liquids. Almost 100% of fluoride in water is absorbed, and 50% to 80% is absorbed from food. About 95% of the total fluoride found in the body is contained in the bones and teeth.4 Once fluoride enters the bloodstream, it is rapidly absorbed into the developing bones and teeth of young children. Fluoride has the ability to increase crystal density by forming fluorapatite, which hardens enamel and stabilizes bone.4–6

Although it is clear that fluoride exposure reduces dental caries, the precise preventive mechanisms have not always been fully understood. The currently accepted mechanisms are:

The systemic role of fluoride in caries prevention among infants and children has come under scrutiny during the past few years. This is partially due to the prevalence of mild to moderate fluorosis in nonfluoridated communities where fluoride supplementation has occurred more frequently.

The prevalence of fluorosis has increased in these communities from 23% between 1986 and 1987 to 32% between 1999 to 2002.8 This increase in fluorosis is related to total fluoride intake, which includes intake from foods and liquids, toothpaste, and other professional or over-the-counter fluoride products. Systemic fluoride recommendations have now been reduced to reflect the greater availability of fluoride from a variety of sources.7

The major source of dietary fluoride in the United States is drinking water.6,9 The US Centers for Disease Control and Prevention (CDC) has stated that water fluoridation is one of the 10 greatest public health initiatives of the past century.10 Today, 204.3 million Americans are served by fluoridated community water systems.11

The local water utility is the best source of information on water fluoride levels in a community water system. Recommendations can be made regarding supplementation using this information. Many families have softeners and filtration systems. While water softeners typically do not alter water fluoride levels, reverse osmosis systems and distillation units may remove significant amounts of fluoride from water. In contrast, most charcoal filtration systems (pitcher type) do not remove fluoride.12

FLUORIDE IN THE DEVELOPING FETUS AND INFANT

For many years, it was unclear whether the developing fetus was exposed to fluoride before birth. More recently, investigators have found that placental transfer or diffusion of fluoride occurs from mother to fetus.13 However, studies on the administration of prenatal fluoride supplements, although possibly showing improvement in the morphology of primary tooth enamel, have failed to demonstrate an additional caries-protective benefit, and are not endorsed by the American Academy of Pediatrics or the American Academy of Pediatric Dentistry.

Although water is a major source of dietary fluoride, it is only one potential source. Some infants receive their complete nutrition from breast milk. The American Academy of Pediatrics affirms the medical and neurodevelopmental advantages of breastfeeding, and recommends exclusive breastfeeding for at least 6 months, with the continuation of breastfeeding for 1 year or longer as mutually desired by mother and infant.14 Research has shown conclusively that there is negligible transfer of fluoride from plasma to breast milk, even in areas of the world with very high levels of fluoride intake.15

The Institute of Medicine6 set the adequate level of fluoride for infants 6-months old and younger at the level generally found in breast milk (0.01 mg/day). For this reason, no fluoride supplementation is recommended during this 6-month period while the child is being nursed. 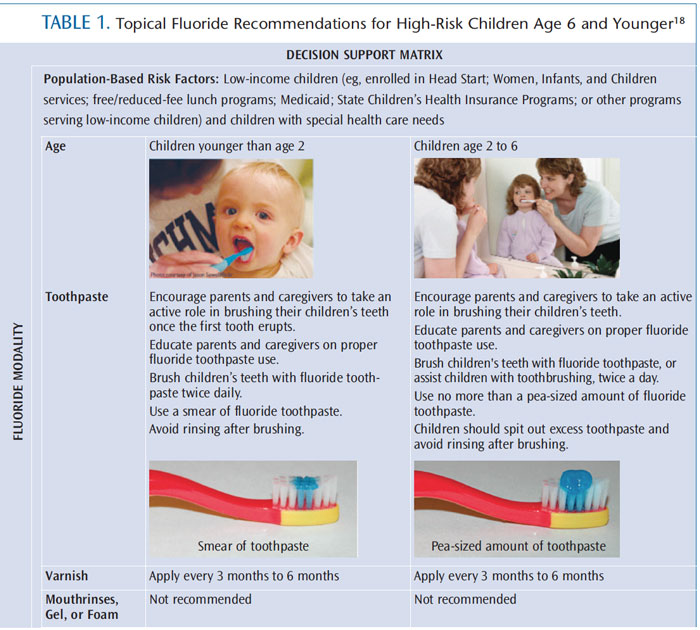 Nonbreastfed infants are nourished with commercially available infant formulas, which have varying fluoride contents. Liquid concentrates and soy-based formulas contain higher concentrations of fluoride than powdered concentrates. When diluted with fluoridated water, these formulas can exceed the recommended upper fluoride limit for infants. Therefore, it is recommended that infant formula be reconstituted with nonfluoridated water.16

Brushing with a fluoride-containing toothpaste is one of the best caries-preventive practices because it combines oral hygiene practices with fluoride delivery. Fluoride toothpaste is widely available and is a major source of both topical and systemic fluoride exposure for young children due to ingestion of the dentifrice. Unless otherwise instructed by a health professional, all children at high-caries risk should use fluoride toothpaste. Table 1 provides fluoride recommendations for children age 6 and younger who are at high risk of caries.18

A review of the literature that included 65,000 children in more than 130 controlled trials suggests that the evidence for topical fluoride use, in general, is “strong” and “consistent.”19 Most studies support the use of fluoride varnish in caries prevention, but, surprisingly, not all have shown effectiveness in public health trials. The CDC gives fluoride varnish an “A” for evidence but recommends that the target population remain only those at high risk. One review suggests that fluoride varnish should be the only topical fluoride used among children age 10 and younger.19 Toothpastes, mouthrinses, and gels can also reduce caries independently of water fluoridation or other sources of exposure. 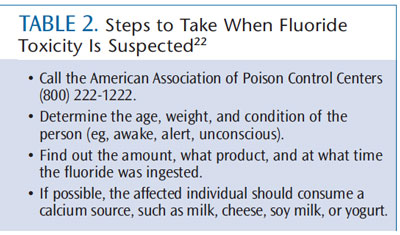 When consumed in excessive quantities (greater than 5 mg/kg), fluoride can be toxic. A lethal dose may be as low as 15 mg/kg.20,21 Children age 0 to 6 account for more than 80% of reported cases of over-ingestion of fluoride. 20,21 Toothpaste, mouthrinses, supplements, and vitamins with fluoride account for several hundred reported over-ingestions per year.20,21 While the ADA recommends that no more than 120 mg of fluoride be prescribed to a patient, this does not prevent fluoride concentrations reaching toxic levels because over-the-counter products may contain more than 120 mg of fluoride. In young children, the use of even relatively small volumes of at-home fluoride products can reach toxic levels (a partial tube of toothpaste for a 1-to 3-year-old).f

Parents should be instructed to keep all fluoride products out of the reach of young children and to directly supervise their use. Table 2 provides instructions if fluoride toxicity if suspected.22 Ingestion can trigger adverse symptoms, such as nausea, vomiting, abdominal pain, diarrhea, tingling of the  face or extremities, excessive salivation and tearing, sweating and generalized weakness.

After weighing the available research, the CDC and World Health Organization, as well as other organizations, have concluded that fluoride is safe and effective when administered according to established guidelines.23,24 However, there will always be opposition to its use. The safety of fluoride has been debated for decades, with water fluoridation attracting most of the attention. As such, oral health professionals need to remain up-to-date on the research supporting the safety of fluoride use and strategies for helping families achieve and maintain good oral health. Some parents may not want their child to receive any fluoride products or fluoridated water. In this instance, oral health professionals should emphasize the need for good nutrition and meticulous oral hygiene practices.

Oral health professionals must weigh potential risks vs benefits when recommending fluoride for their patients. Children’s caries risk, sources of fluoride exposure, and oral health practices should be considered when recommending fluoride supplements. While professionally applied fluorides and water fluoridation are very effective, two of the best weapons in the fight against tooth decay are a nutritionally sound diet and brushing teeth with fluoridated toothpaste under close parental supervision. 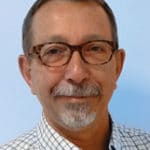 Gary R. Nelson, DDS, MS, is an assistant professor in the Department of Pediatric Dentistry at Oregon Health & Science University, School of Dentistry in Portland. 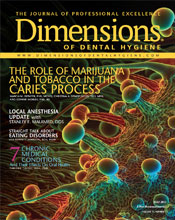