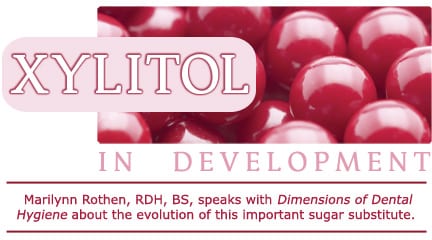 Marilynn Rothen, RDH, BS, speaks with Dimensions of Dental Hygiene about the evolution of this important sugar substitute.

Q. When was xylitol discovered and how long has it been used in dentistry?

A. Emil Fischer, a German chemist discovered xylitol in 1891. It was then rediscovered during World War II when Finland was suffering from a shortage of sucrose (table sugar). During this time, the Finnish began using xylitol as a sugar substitute. Its use became more common in the 1960s especially in Germany, Switzerland, Soviet Union, and Japan. In 1963, it was approved in the United States by the Food and Drug Administration (FDA) for use as a special dietary and nutritional additive. Regarding the use of xylitol, the code of federal regulations states: “Xylitol may be safely used in foods for special dietary uses, provided that the amount used is not greater than that required to produce its intended effect.”

Dentistry became interested in xylitol in the 1970s when Finnish studies investigated xylitol, fructose, and sucrose and their effect on dental caries. The Turku sugar studies included 125 adults, divided into three groups, who consumed almost exclusively either sucrose, fructose, or xylitol as the only sweetener in their diet.2 Study participants in two groups had their sucrose-containing foods replaced with those containing either fructose or xylitol. For 2 years, the participants consumed their pastries, desserts, jams, juices, soft drinks, candy, and gum with their assigned sweetener-sucrose, fructose, or xylitol. This revealed a drastic reduction in caries through the substitution of xylitol for sucrose. Fructose also reduced caries but not as substantially.

Q. Was this discovery accidental?

A. No, xylitol was first produced in Finland for use as a sugar alternative, which is when its relationship to caries was discovered. A few preliminary studies were then conducted in Finland that looked at the effect of xylitol on plaque and cariogenic bacteria.3,4 These early studies prompted the extensive 2-year Turku study. Since then, a significant amount of research has been conducted to verify xylitol’s ability to reduce tooth decay and to understand xylitol’s mechanism of action.

Scandinavian countries have been producing candy and gum with xylitol for more than two decades. The use of xylitol gum is also common in many Asian countries. The dental community in the United States didn’t begin using xylitol until the 1990s and the number of products containing xylitol has really grown over the past 5 years as evidence supporting the role of xylitol in reducing the incidence of tooth decay influences the market.

Q. In the United States, what products currently contain xylitol?

A. Xylitol is found in a variety of products. It can be purchased in bulk form and is found in energy bars, sugar-free desserts, jams, and syrups. There are various gums and mints containing xylitol that can be purchased in retail stores, through specialized manufacturers, and online. A number of toothpaste brands, oral rinses, vitamins, and nasal sprays now contain xylitol in varying amounts. Xylitol-containing teeth wipes used to protect infants’ teeth are currently available.

HOW MUCH IS ENOUGH?

Q How can dental hygienists be sure the xylitol products they recommend are effective?

A. First, look at what types of products have been researched to establish their effectiveness. For example, several studies show that toothpaste containing 10% xylitol is effective in reducing either decay or the decay-causing bacteria-S. mutans.5-7 However, the percentage of xylitol contained in a product is not always clearly noted. Many manufacturers are happy to provide this information and some provide it online. More research will establish what amounts of xylitol are effective in infant wipes, oral rinses, and nasal sprays.

Gums and mints are effective in preventing tooth decay if the minimum of 6 g to 10 g of xylitol is ingested per day. To ensure that your patients are properly informed, the amount of xylitol contained in gums and mints must be clear in the product labeling. Those labeled “sugar free” or “does not promote tooth decay” may contain three or four sugar alcohols (polyols) with the total listed in grams or by percent. Xylitol may not be the first sugar alcohol listed, though the packaging may highlight that it is present for marketing purposes. Ingredient lists always include the most plentiful ingredients first. For example, a product ingredient list may indicate that one piece of gum weighs 1.8 g with 1 gram attributable to sugar alcohols. Xylitol is listed as the second of three sugar alcohols that make up the1 gram and it is the fourth ingredient in the gum. The exact amount of xylitol is unknown and unlikely to have a preventive effect because xylitol does not make up the bulk of the sugar substitute in the gum. Some mints, due to their size, contain insignificant amounts of xylitol.

Products that indicate the number of grams of xylitol per piece, list xylitol as the first ingredient, or indicate that it is 100% sweetened with xylitol, can help you make informed product recommendations. The use of xylitol in reducing tooth decay is particularly attractive because its effectiveness is not dependent on patients reducing the amount of cariogenic foods in their diet or making other oral hygiene changes. Xylitol can be used along side other professional preventive measures like topical fluorides and sealants.

Marilynn Rothen, RDH, MS, is a clinical associate professor in the Department of Oral Health Sciences at the University of Washington (UW) School of Dentistry in Seattle. She is the associate director of the Master of Science Program in oral biology for dental hygienists. She has served as manager of the Regional Clinical Dental Research Center since 1996. Rothen is the lead dental hygienist on the Health Resources and Services Administration (HRSA)-funded training grant, Early Childhood Oral Health Training Program (EChOTrain). 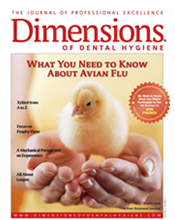