Van B. Haywood, DMD, shares his expertise on this popular cosmetic treatment option.

Q. What are the main tooth whitening techniques used today?

A. There are three general classes of tooth whitening techniques: in-office, tray delivery, and over-the-counter (OTC). In-office varies in concentration of hydrogen peroxide with and without light or heat activation. Tray bleaching varies in concentration and uses either carbamide peroxide or hydrogen peroxide. OTC products are either copies of office-dispensed products or strips, wraps, and paint-ons containing hydrogen peroxide. Each system has indications and contraindications depending on what works well for the patient. The main negative of OTC bleaching is that patients are not receiving a proper examination prior to bleaching, so pathology could be masked by changing the color of teeth when actually a root canal or some other aggressive treatment is needed. A recent article demonstrated a six shade change could be obtained with either 7 nights of tray bleaching, 16 days of strip applications, or 3 in-office visits, which is a good comparison of the three techniques.1

Q. Is there a difference between whitening ingredients?

A. Hydrogen peroxide is active for 30 minutes to 1 hour. The products that use hydrogen peroxide are meant to be used 30 minutes to an hour because 50% of the peroxide is released within the first 30 minutes. With carbamide peroxide, it takes about 2 hours for 50% of the material to be released and it continues to release from 2 to 6 more hours after that. Typically carbamide peroxide is used in overnight products and hydrogen peroxide is used in daytime products. Both night time and day time bleaching are good options because patients have different requirements. Some people can’t wear the tray at night because they salivate too much or because they can’t sleep well with the tray in place. For these patients, 30 minutes to an a hour during the day is more practical. However, it may take longer to get the results due to the shorter application time. Carbamide peroxide also contains urea, which has anticaries properties2 and a long history of safety and efficacy.

Q. For a patient who requires 6 weeks of whitening application, is prolonged usage a problem?

A. My colleagues and I have published several articles on the safety of tooth whitening.3-9 I’ve bleached people’s teeth for as long as 12 months every night with no problems. We published a study of 6 months of nightly bleaching where we then took Scanning Electron Microscope (SEM) evaluations of the teeth.10 This study showed that a low concentration of carbamide peroxide with a neutral pH from a reputable company is very manageable by the body and the tooth. We can say that, within certain safety parameters, extended bleaching times do not cause any problems.

Q. What is the effect of whitening on enamel?

A. The effect on enamel depends on the product and the technique. First, remember that enamel is eroded by exposure to low or acidic pH levels. Interestingly, cola drinks, fruit juice, white wine, and yogurt have a pH of about 2.6—the same as stomach acid. Enamel will erode from continued exposure to these substances. Some of the hydrogen peroxides are low pH products so the dental hygienist should consider using them with adjunctive remineralization therapies. In-office higher concentrations of hydrogen peroxide have the most effect on enamel.11 Most carbamide peroxide products are a neutral pH and the pH is elevated by the urea, so extended use is not a problem.

A. One to 3 years is the minimum duration but we have 10 year recalls with 42% of the patients still not having a touch-up or any further treatment. I doubt these patients remember what they looked like 10 years ago because it’s not color we measured but rather their perception of color stability. My point is that a routine touch-up system isn’t necessary. A system that accommodates whether patients feel like their tooth color has changed is better when deciding about retreatment.

Q. What is the cause of patients’ teeth darkening over time?

A. There are a variety of causes. It could be secondary dentin being laid down, it could just be a continued ingestion of chromogenic food stuffs, and the porosity of their enamel, as well as whether they are a coffee drinker, a smoker, a red wine drinker, etc. The normal aging process also darkens teeth. Some teeth, like endodontically-treated teeth, just tend to relapse in about 3 years or so. We’re not sure why.

Q. Does the increased amount of carbamide peroxide used in tray bleaching cause increased sensitivity?

A. There is an increased risk of sensitivity when using higher concentrations in tray bleaching but not everybody experiences discomfort with higher concentrations. One of our studies at the Medical College of Georgia showed that using potassium nitrate in the tray for 10-30 minutes when sensitivity occurs can alleviate the majority of sensitivity issues.12 Concentration values are not linear. In other words, 20% is not twice as fast as 10%. Also, the higher the concentration, the greater the rebound in color after treatment to the stable shade. What we’re learning is that the tooth has a finite limit on how fast it will change color and how white it will become that is specific to each individual. Once the limit for each particular person is exceeded, it doesn’t matter what else is attempted, it will not change. Just like we have different hair and eye colors, we all have different maximum tooth colors and rates of change. That’s why some people can whiten their teeth in 3 nights and for others it takes 6 weeks. Whitening is more tooth-specific than product-specific.

Van B. Haywood, DMD, is a professor in the Department of Restorative Sciences at the Dental College of Georgia at Augusta University. A coauthor in 1989 on the first paper on nightguard vital bleaching, he has more than 145 publications on bleaching technique and esthetics, including first papers on treating bleaching sensitivity with potassium nitrate, direct thermoplastic tray fabrication, bleaching primary teeth, and caries control with bleaching materials. Many of these articles are available free on his website: vanhaywood.com. 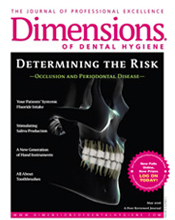