What the Future May Hold

The views expressed in this interview are the author’s.

Q. What was the first connection between oral and systemic health that you made as a researcher?
A. In the 1980s we hypothesized that there was some abnormality in the immune response of patients who had localized juvenile periodontitis, a condition that causes bone loss in young individuals from 10 years of age to 18 years of age and is called aggressive periodontitis. It’s a fairly rare condition affecting approximately 1% of adolescents. What we found is that the neutrophils (white blood cells) of these patients had a reduced chemotactic ability (ie, reduced ability to migrate to the site of infection).1 This was our first finding that related a systemic condition to periodontal diseases.

The results of that study led to the investigation of other conditions where neutrophils were abnormal to determine if periodontal diseases were more severe in these patients. Diabetes was the first disease we looked at. We studied a large population of Native Americans, who have the world’s highest incidence of diabetes—about 40%.2 We studied the Pima Indians who live in the Gila River Indian Community between Phoenix and Tucson in Arizona. There are about 5,000 Native Americans who live on the reservation and most of them receive their medical and dental care at one site, the Sacaton Hospital and Dental Clinic. So we set up a study there that evaluated their periodontal disease status, caries status, as well as other oral and general health conditions over a 7-year time period.3 We were able to study almost 80% of the population. We found that periodontal diseases were more severe in those who had diabetes as compared to those who didn’t have diabetes. These findings have been reproduced in other populations providing strong evidence that periodontal disease is a complication of diabetes.

Q. Many new oral/systemic links are currently being studied. Which do you think are the most compelling?
A. The link between periodontal diseases and diabetes has the most evidence to support it. There is also a large literature base that shows a relationship between periodontal disease and atherosclerotic diseases including heart disease and stroke.5,6 The association between atherosclerotic disease and periodontal disease was recently recognized by our medical colleagues in a joint publication on this subject which appeared in the Journal of Periodontology and the American Journal of Cardiology.7,8 In these papers, recommendations for co-management by physicians and dentists are given.

Data also exist on a link to respiratory infections.9,10 This relationship is found so far mainly in patients who are institutionalized, such as in intensive care units and nursing homes, where there is reduced ability to perform good oral hygiene. These patients are susceptible to pneumonia and bronchitis. However, these lower respiratory infections can be prevented by good oral hygiene, usually requiring assistance by staff who apply antiplaque mouth – rinses or swabs daily.

The results of the low birth weight and periodontal disease association studies are mixed and demonstrate that we still do not understand this relationship fully.11-13 Two large periodontal intervention for reducing adverse pregnancy events trials have been published. The results suggest that periodontal intervention appears to have little effect in reducing adverse pregnancy outcomes as evaluated in these studies.10,12 However, the trials are not definitive likely since they looked at young women who generally don’t have much periodontitis to start with and because the efficacy of the treatments provided in the studies was questionable. This field is still in flux and more studies using subjects who have clear periodontal disease, treatments that are effective, and adverse pregnancy outcomes shown to be strongly related to periodontal disease are needed.

What is still needed is an understanding of the biologic plausibility of these associations. What are the pathways that explain linkages? In diabetes we have much information on the potential mechanisms whereby periodontal tissue is susceptible to infection in people who have diabetes. Systemic inflammation may link the two diseases. In cancer, we haven’t identified the mechanisms that show the connection, although there are several theories. One is that cancer is enhanced by inflammation and periodontal infection causes inflammation. There are cancers that illustrate this relationship, such as gastric cancer, which is preceded by Helicobacter pylori infection of the antrum. This infection causes inflammation and eventually some of these patients develop stomach cancer. More research is needed to evaulate if there is truly an association between cancer and periodontal disease, and if so, to understand the mechanisms linking thise diseases.

Another area that merits attention is the relationship of periodontal diseases to Alz – heimer’s disease. The general thought is that periodontitis is an infection that leads to systemic inflammation, which increases the severity or incidence of chronic diseases like cardiovascular disease and diabetes, stroke, and possibly Alzheimer’s disease. Wherever a link may exist between systemic disease and systemic inflammation, researchers are taking a very close look at the disease associations that may result. This is an area of active investigation and shows much promise since inflammation can be managed by dietary supplements such as omega 3 fatty acids and drugs.

Q. If evidence proves there is a link between periodontal diseases and cancer, how will this affect the provision of oral health care?

In diseases where the link is already wellestablished, I believe the incorporation of periodontal management into overall health care is imminent. There is emerging evidence that the management of periodontal diseases in people who have diabetes will actually reduce not only glycated hemoglobin but also moderate the complications associated with diabetes such as heart disease and diabetic nephropathy.15 Eventually, I predict management of periodontal disease will become essential in the care of people who have diabetes just as foot and eye care are today. We haven’t reached this point yet. I believe the motivating factors that will lead to the dental office expanding its reach of care to include emerging evidence for effectiveness of dental office screening, data from insurance companies that show oral care often reduced medical care expenses, and advocacy by the profession. 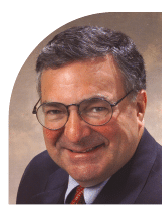 Robert J. Genco, DDS, PhD, is distinguished professor of Oral Biology in the School of Dental Medicine and distinguished professor of Microbiology in the School of Medicine and Biomedical Sciences, at the State University of New York at Buffalo. He is also a professor in the Department of Immunology at the Roswell Park Cancer Institute. Genco is the vice provost and director of Science, Technology Transfer and Economic Outreach at Buffalo. He is editor emeritus of the Journal of Periodontology after serving as editor for 18 years, and has published more than 325 articles on periodontology.