What Is the Efficacy of Chlorhexidine Varnish for Root Caries?

What is the current research on the efficacy of chlorhexidine varnish for root caries compared with fluoride varnish?

QUESTION: What is the current research on the efficacy of chlorhexidine varnish for root caries compared with fluoride varnish?

ANSWER: Root caries has become a significant problem for the dentate senior population.1,2 Exposed root surfaces are vulnerable to demineralization at a higher critical pH than enamel because cementum and dentin contain less percentage of minerals.1 In addition, restorative management of root caries lesions is difficult due to access and may require extensive removal of dentin.1 As such, dental hygienists need to be able to identify patients at high risk and employ appropriate preventive interventions and/or noninvasive treatment for active lesions.

Risk factors for root caries include age, decreased salivary flow, dietary habits, presence of microbial plaque, lack of fluoride exposure, past and current dental caries, and chronic medical conditions. Whenever possible, preventive measures should be used. Fluoride toothpaste, fluoridated water, and dietary improvements are the cornerstones of caries prevention.3 However, patients with elevated caries risk may benefit from additional fluoride sources, as well as adjunctive therapies, such as fluoride varnish and chlorhexidine varnish, in the treatment of root caries lesions.

Durinda is an adjunct associate professor in the Division of Practice Essentials and Interprofessional Education at the University of Detroit Mercy School of Dentistry, where she teaches courses on prevention. She is the author of the fluorides chapter in the 9th to 11th editions and co-author in the 12th edition of Wilkins' The Clinical Practice of the Dental Hygienist. Mattana also has more than 30 years of clinical experience, answers questions regarding fluoride for the Dimensions of Dental Hygiene's Ask the Expert online forum, and teaches dental and dental hygiene continuing education courses focused on prevention.

A Duty to Protect the Public 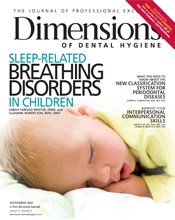