What oral health care workers need to know about vitamin C deficiency and its effect on oral and systemic health.

By Darice K. Pacak, RDH, MSEd On Jul 15, 2010 0
PURCHASE COURSE
This course was published in the July 2010 issue and expires July 2013. The author has no commercial conflicts of interest to disclose. This 2 credit hour self-study activity is electronically mediated.

Vitamins are any variety of organic substances derived from plant or animal sources that are essential in small quantities to the nutrition of the human body. An essential nutrient found mainly in fruits and vegetables, vitamin C, also known as ascorbic acid, is water soluble, meaning that it must be consistently replenished because the body eliminates any leftover amounts.1-5 The body requires vitamin C to form and maintain bones, blood vessels, skin, scar tissue, tendons, and ligaments. It is also necessary for wound healing and for the repair and maintenance of cartilage and teeth.1-5

Vitamin C is also an antioxidant, a nutrient that stops cell damage caused by free radicals, which can facilitate the development of significant health issues such as inflammatory problems, cancer, and heart disease. Antioxidants can also limit damage caused by exposure to pollutants and chemicals.1-5

The function of vitamin C in the human body was initially discovered through experience on the high seas. In 1536 Jacques Cartier discovered that the extract from spruce tree needles (a source of vitamin C) cured crew members of scurvy—a disease caused by vitamin C deficiency that can result in anemia, soft, bleeding gums, and subcutaneous bumps.6-10 A surgeon travelling on a ship ferried by the East India Co first noted that lemon juice helped in the prevention and treatment of scurvy in the 17th century. In 1747, a member of the British Royal Navy, James Lind, performed the first clinical trial to study the efficacy of vitamin C in treating scurvy. He gave one group of men lemon juice while at sea, while another group of seamen received no citrus. The group that received the lemon juice did not experience any of the telltale signs of scurvy. Lind published his results in 1753.11 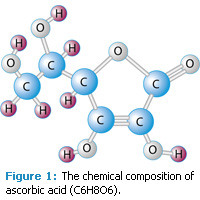 In time, the effective treatment of scurvy throughout the world became commonplace because of the discovered link between the disease and the consumption of fruits and vegetables.6-10

Ascorbic acid is a crystalline solid and appears white and odorless with a sharp acidic taste. It has a chemical composition of C6H8O6 with a molecular weight of 176.13 (Figure 1). Its chemical name is 3-Oxo-L-gulofuranolactone enol. Decomposition can take place at 190° to 192° Celsius. In addition, 1 g of ascorbic acid dissolves in 3 ml of water but it is insoluble in most organic solvents. Ascorbic acid is also sensitive to heat and most metals. For example, copper can catalyze its oxidation.6-8

Ascorbic acid is found in all living tissues but it must be consumed; it is not absorbed through the environment. The human body does not manufacture vitamin C. Important sources are fresh fruits and vegetables (Table 1).6,7,9,10,12 The consumption of raw sources of vitamin C provides higher levels of the nutrient than cooked fruits or vegetables, because cooking reduces levels of vitamin C. Foods containing vitamin C should also be stored in airtight containers to prevent their early oxidation.7,8,10,12 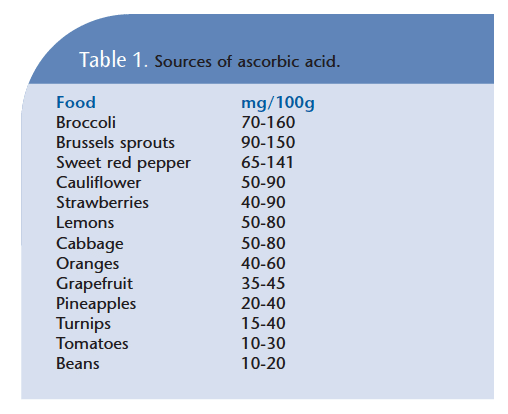 Vitamin C is absorbed in the intestine by an active Na+ dependent, which requires energy to act as a transport mechanism. In humans, the absorption intake via the oral route is 3 g. Ascorbic acid is widely distributed throughout the tissues with the highest amounts found in the adrenal and pituitary glands. Other organs, such as the liver, spleen, and brain, also contain slightly lower concentrations (Table 2).6

The body has a saturation level of approximately 20 mg per kilogram of body weight.6 Elimination of vitamin C occurs primarily through urinary excretion with excretion by feces containing negligible amounts.6 Increased amounts of vitamin C may be used by the body when under increased physical and mental stress or while fighting disease. Thus, increasing the intake of vitamin C may be helpful during these times.7

Lack of ascorbic acid results in reduced stability of connective tissue and capillary integrity. Research shows that skin, bone, and tendons are sensitive to vitamin C deficiencies. In addition, studies have demonstrated that daily doses of 1 g to 4 g are beneficial to people who have pressure sores, ulcers, or Ehlers-Danlos syndrome type VI. A higher rate of complete or partial healing has been observed leading to improved wound healing, corneal growth, less bleeding time, muscle strength, and greater pulmonary volume.6,12,13

ORAL SIDE EFFECTS OF VITAMIN DEFICIENCY

A lack of vitamin C in the diet has significant systemic and oral health effects. Tables 3 and 4 provide lists of the most common systemic and gingival signs of vitamin C deficiency.1-5 Spongy gums with fetor and bleeding have been documented as early as 1894 when health problems were linked to the lack of vitamin C in diets. Oral side effects can be detected as early as 60 days to 90 days on a vitamin C-deficient diet. In addition, petechiae, follicular hyperkeratosis, dryness of the mouth, loss of teeth, periodontal diseases, and disintegrating restorations are frequently noted.6,7,10 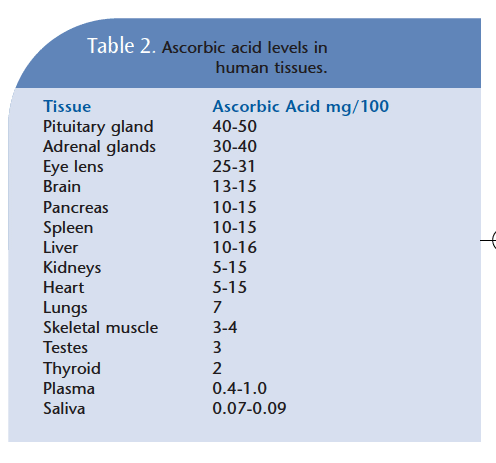 In periodontium and scorbutic gingivitis, adequate ascorbic acid intensively regulates the health of the periodontal ligament because of its direct relationship to collagen and its presence in the sulcular epithelial basement membrane.8,14-17 Ascorbic acid directly functions to promote and assist the tissue in providing a protective barrier, lessening permeability against bacterial endotoxins. Thus, the necessary amounts of vitamin C for a healthy gingiva may be greater than the recommended daily allowance. Collagen is also a significant factor when considering healthy tissue fibers in the gingival and periodontal ligament and is a major contributor to alveolar bone health.8,14-16

Histological studies have also deter- mined that fibroblasts, osteoblasts, and odontoblasts that form the dentin of teeth are readily affected by a lack of vitamin C. When too little vitamin C is available, these vital cells exhibit a decrease in their orderly arrangement and little or no dentin is formed.8,12,13 Vitamin C also plays a vital role in the matrix needed for the deposit of calcium phosphate crystals during bone formation. Without it, bone development and fractures are more likely to occur. The good news is that after consuming increased amounts of vitamin C, the body is replenished and the connective tissue begins to maintain itself again.8

The recommended daily intake of vitamin C is 60 mg for adults and 45 mg for children. However, caution should be used when chewable vitamin C tablets and syrup are used because they may cause enamel erosion and dentin hypersensitivity

More than 20% of the elderly population is currently iron and vitamin C deficient. Contributing factors may include drugs (steroids, antibiotics, and salicylates), alcohol, and tobacco. A smoker’s daily intake should be increased to approximately 140 mg of vitamin C per day and in cases of wound healing during post-surgical procedures, an increase to 200 mg to 350 mg/per day may be prescribed. This is particularly important because post-surgical collagen is being laid down during the healing phase.6,8,9,12,18

A lingual vitamin C test is available to assist with the treatment planning of patients. It involves the application of a blue dye on the tongue and then timing how long it takes the dye to disappear. The dye is a complex compound (dichloroindophenol sodium salt) and undergoes discoloration when in contact with vitamin C. Vitamin C is needed in the normal metabolism of tissue cells, including the fungiform papillae and supporting tissue, which assist in the dental application of this screening test.7 Other testing options include the examination of blood, urine, and feces.

Dietary assessment and counseling are important facets of treatment planning. The identification of a patient who has a nutritional risk factor, such as a vitamin C deficiency, can contribute to successful treatment. Once the patient is identified, an oral health care worker may suggest foods rich in vitamin C and then consider the addition of supplements (not exceed- ing 100% unless a dietitian or physician is consulted) thereby avoiding the possibility of an oral health risk.19,20 Dietary studies show that vitamin C deficiency is related to gingival bleeding. Vitamin C supplementation is a simple intervention that can be part of additional resources to promote patients’ gingival health. Studies investigating the effects of vitamin C and its relationship to immunologic and inflammation tissue responses demonstrate that low levels of vitamin C put patients’ periodontal health at risk.21,22

Dental hygienists need to be aware that vitamin C is involved in the immunological defense actions of the body, which makes it an important aspect of periodontal therapy and treatment planning. Recommending vitamin C-rich foods can support the overall management phase of treating periodontal diseases and post-surgical wound healing. This is particularly true for patients who are smokers since they exhibit lower plasma levels of vitamin C. Even the simple addition of grapefruit to the diet can make a significant improvement to a patient’s plaque index, sulcus bleeding index, and probing pocket depths after only 2 weeks of consumption.23 In addition, when examining the use of chewing gum containing and releasing vitamin C, another study shows that a reduction in the total calculus score was determined (especially in heavy calculus formers) along with a reduced amount of visible plaque and reduced number of bleeding sites (37%).24

Additionally, research shows that the oral administration of vitamin C prevents alveolar bone loss in rats that have induced bone resorption due to high dietary cholesterol. However, further research needs to be conducted to determine the ability of vitamin C—and the amount needed—to inhibit periodontal damage induced by high dietary cholesterol in humans due to the ability of vitamin C to act as an intracel- lular antioxidant and co-factor to microso- mal enzymes.8,18,25

Vitamin C is beneficial to gingival health. Patients should be encouraged to eat a balanced diet of fruits and vegetables to support the nutritional needs of their oral and overall health. Dental hygienists can play a significant role in the identification of vitamin C deficiencies and the educa- tion and motivation of patients to make healthy diet choices.

Darice K. Pacak, RDH, MSEd, is a full professor in the Department of Dental Hygiene at the University of Cincinnati. In addition, she serves as a staff consultant to the American Dental Association Council on Dental Accreditation and has authored and reviewed numerous publications.

The Five Most Common Errors When Using Ultrasonic Inserts