The Price of Safety

Over the past 30 years, changes intechnology and increasing fears regarding disease transmission have prompted many manufacturers to shift from making multi-use products to single-use devices.1 All medical and dental devices are regulated by the federal Food and Drug Administration (FDA), which defines a single-use device as a product intended for one use on a single patient during a single procedure.2

HISTORY OF THE MOVEMENT FROM MULTI-USE TO SINGLE USE

Health care’s transition from reusable medical products to single-use devices has been ongoing since the 1950s. An outbreak of hepatitis caused by the faulty sterilization of reusable syringes by a psychiatrist in southern New Jersey during the late 1950s drew attention to the issue of patient-to-patient disease transmission.3 This event, which led to the deaths of 14 people, became a catalyst for the wide-scale transition to single-use devices.4 Around the same time, a New Jersey dentist reused single-use hypodermic needles, which resulted in nine patients contracting and later dying from hepatitis.5

In the first half of the 20th century, most medical devices were made of glass, rubber, and metal that were easy to clean and reprocess. As devices became more complex, they could not be cleaned or sterilized properly, which led to a high rate of pathogenic cross-contamination. In the 1960s, the plastics revolution and the development of ethylene oxide sterilization made convenient, disposable sterile products possible. With the discovery of the human immunodeficiency virus (HIV), the increasing prevalence of hepatitis, and the transition to the federal Centers for Disease Control and Prevention’s (CDC) standard precautions, interest in single-use devices grew significantly.6

DEFINITION OF SINGLE USE

Dental offices use many single-use devices for patient care, including saliva ejectors, impression trays, prophy cups, and irrigating syringes. These items are not usually heat tolerant and cannot be reliably cleaned.7

Although all medical and dental devices and instruments approved by the FDA are accompanied by instructions for use, dental office staff members may decide to reuse a device that is intended for single use. Plastic perforated impression trays are a common example. These devices are typically labeled as single use, but dental professionals may ask if reuse is possible if they have only been inside a patient’s mouth for a moment. The answer is no—single use means single use only.

A single-use device’s instructions for use will not include cleaning and sterilizing guidelines. Thus, it is unacceptable to make an individual decision on how to reprocess a single-use device. At times, dental team members may decide to immerse items in a glutaraldehyde solution without really knowing if this is an appropriate method for disinfection or sterilization. Sparrow provides three definitive reasons for not reusing single-use devices: potential cross infection—due to the composition of the device, the elimination of all viable microorganisms may not be possible; leaching of disinfectants—the device may absorb or adsorb chemicals that can leach out over time; and material alteration—certain materials may soften, crack, or become brittle.8 Therefore, placing a perforated impression tray in a chemical solution for disinfection or sterilization can impact patient safety. If an item does not include instructions for reprocessing, it should be used once and disposed of appropriately.9 Another argument for not reprocessing a single-use device is that the manufacturer has labeled the device in this manner for a reason. Table 1 lists common reasons a device may be marketed as single use only.10

Although it may not be the operator’s first thought when utilizing a single-use device, there are significant ethical issues regarding informed consent, patient safety, and cost. Beneficence, a value that all health care providers are obligated to uphold, means “to put concerns for the patient’s well-being above any benefit.”5 A patient’s autonomy is affected by not being informed about the use of a reprocessed single-use device.11 All patients should receive the same standard of care, without being exposed to an increased risk of infection.6 Reprocessed single-use devices are not as safe as new ones and the more times a device is used, the more likely it is to malfunction. Because no sterilization process is perfect, the odds of infection are higher when a device is used on more than one person.11

THE QUESTION OF REPROCESSING

The reprocessing of single-use devices is a controversial, complex subject. Most dental professionals can remember when reuse was more common than disposal, prior to dentistry’s implementation of the CDC’s and the American Dental Association’s infection control recommendations.9

The transition to single-use devices has had significant environmental effects. Most single-use devices are not classified as infectious/regulated waste and can be disposed of in regular trash receptacles. However, they have added to the surplus of nonbiodegradable plastic in the environment.8 One study indicates that American health care facilities contribute more than 4 billion pounds of waste annually to landfills and commercial incinerators—making the health care industry the second largest waste producer after the food industry.12 In an editorial published in the March 2010 issue of Academic Medicine, Gifty et al call for a return to the reprocessing of some single-use devices in order to reduce waste.13

While long-term scientific and clinical evidence is not available on the cross-infection potential presented by reuse of most disposable devices, accumulated data show that the reuse of disposable needles and other sharps devices presents substantial risks to patients.9 This past summer, the Colorado Department of Public Health and Environment reported that an oral surgeon reused syringes and needles during oral and facial surgery procedures and while administering intravenous medications. Between September 1999 and June 2011, he may have exposed thousands of patients to bloodborne viruses such as HIV and hepatitis B and C. Thus far, the health department has identified five patients who have tested positive for one of these infections.14

The Occupational Safety and Health Administration (OSHA) “Bloodborne Pathogens Standard” has been in place for more than 20 years and the CDC “Guidelines for Infection Control in Dental Health-Care Settings” have been in practice since 2003. So why would a dental health care provider want to put patients at risk and lose his or her career and professional reputation? In some instances, cost savings may be the impetus, but the risk of losing one’s professional livelihood hardly seems worth the money saved by reusing single-use devices. Ignoring manufacturer’s instructions and FDA regulations has legal ramifications, especially if patients suffer harm.11

There are other questions to contemplate when considering reuse of a single-use device. Is the patient aware that the single-use device is being used again? Should the patient be charged a reduced fee for the procedure since the device is not new? Remember that there is a cost in reprocessing (cleaning, disinfection, packaging, and sterilization) of devices. When the costs and risks involved are weighed, it is always more prudent to dispose of the single-use device rather than spending resources on reprocessing it.9

Patient safety is at the forefront of all dental health care procedures. The widespread utilization of single-use items during the delivery of dental care has helped reduce the risk of disease transmission. Dental health care providers must be vigilant about protecting their patients by adhering to all relevant guidelines. There is no excuse for not following established best practices. Safety isn’t expensive—it’s priceless.15

Katherine Schrubbe, BSDH, MEd, PhD, is the director of quality assurance at Dental Associates of Wisconsin and an adjunct associate professor in the Department of Clinical Services at Marquette University School of Dentistry, both in Milwaukee. She has worked in dental education for more than 30 years and is an active member of the Organization for Safety, Asepsis and Prevention. Schrubbe has authored numerous articles on infection control and speaks both locally and nationally on the subject. 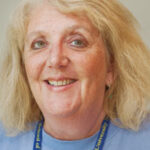 Kim Roth, BA, MA, CRCST, is the director of central sterilization at Marquette University School of Dentistry, where she has worked in central service and instrument reprocessing for more than 23 years. She is an active member of the International Association of Healthcare Central Service and Material Management and a past board member of the Wisconsin Association of Central Service (CS) Professionals. Roth earned the American Society for Healthcare CS Professionals/3M Thomas Samuels Award for outstanding achievements to the profession. She also holds an adjunct faculty appointment at Lakeland College in Sheboygan, Wis, and is currently pursuing a doctoral degree.

The Role of Interleukin-6 in Oral Diseases

The Power of Selection 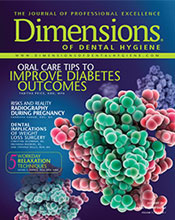