The Potential of the Ultrasonic Probe

Ultrasonography has the capacity to greatly enhance periodontal assessment through a non-invasive periodontal probe.

Ultrasound technology was first used in dentistry during the 1950s for cavity preparation. With the advent of high-speed drills, the technology was repositioned for ultrasonic scaling or power scaling in the early 1960s, which revolutionized mechanical debridement. Dentistry currently uses ultrasound technology in cleaning units, power scaling, toothbrushes, and root canal preparation. Researchers are looking at new ways to expand this technology. Ultrasound may offer great potential in the development of a non-invasive periodontal assessment tool that would yield real time information regarding clinical features such as pocket depth, attachment level, tissue thickness, histological changes, calculus, bone morphology, as well as in the evaluation of tooth structure for fractures and cracks.

The current standard in measuring periodontal disease activity is manual probing to determine clinical attachment level (CAL).1,2 Unfortunately, either a retrospective attachment loss of more than 2 mm or destructive periodontal disease as evidenced by bone loss on radiographs must occur before a reliable diagnosis can be made.1,3 Additionally, inherent inaccuracies in manual probing, such as variations in examiner pressure, placement, angulation, visual interpretation and recording, and differences in probe tip diameter and individual tissue health all contribute to tissue penetration and inconsistencies in periodontal assessment.4,5

Ultrasonography is a reliable technique for periodontal assessment.6 The possibility of improved reproducibility may mean that ultrasonic probing has merit as a diagnostic tool.6-8 Additionally, ultrasound imaging has significant potential for accurate evaluation of periodontal disease status by using a non-invasive method.6-12

The advancement of ultrasound technology may produce a new generation of periodontal probes that will yield more diagnostic information, eliminate operator variability, and produce real time non-invasive methods of assessment. Ultrasonic periodontal probing has the capability of detecting much smaller increments of anatomic change with the promise of earlier detection of tissue breakdown and additional histological information, such as tissue thickness and inflammation.7,9,12 Periodontal ultrasonography is likely to yield more information with less error, which will aid in a better understanding of the pathogenesis of disease, thus permitting earlier diagnosis and intervention.

THE EVOLUTION OF THE ULTRASONIC PERIODONTAL PROBE

The main components of ultrasound equipment are the display/output device; the transducer, which is responsible for emitting and receiving sound waves; and the central processing unit. Early dental ultrasound equipment was cumbersome and had no resemblance to traditional periodontal probes. Initial research conducted on cadaver jaws and plastic test blocks with holes in them to simulate periodontal pockets yielded data that were used to develop the framework for computer software algorithms and to probe tip geometry.12 The biggest challenge was to convert the ultrasound echoes into understandable dental language. In other words, the ultrasound waveform patterns had to be converted into numerical interpretations that represent typical probing depth measurements recognizable to dental professionals.7-9,11-12 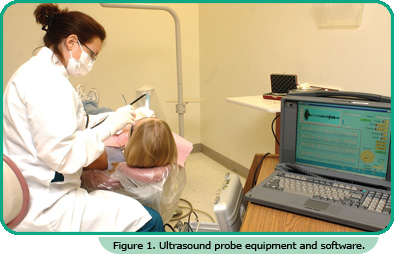 The original raw data were difficult to interpret due to variability in signal strength and noise. To obtain periodontal pocket depth data from the ultrasound echoes, a processed signal for each probing site was visually examined by five individuals experienced in ultrasound signal analysis. These observers identified a pocket depth at the point where the echoes were no longer prominent. This transition point corresponds to the level where connective tissue attaches to the tooth cementum. At this point, the connective tissue strongly reduces the echo returns from the tooth surface, so features beyond this depth no longer produce significant waveform peaks. Several researchers determined how consistently different individuals identified the ultrasonic pocket depth and their performance was compared to a fully automated feature recognition software algorithm. In practice, the ultrasonic echoes will be analyzed by computerized artificial intelligence algorithms, which will automatically interpret echo signals, convert them to probing depths, and display numerical readings on a dental chart immediately (Figure 1).

Early handpiece design was ergonomically modified to facilitate intra-oral use. Although the next generation of ultrasound probes was a significant improvement over previous designs, the handpiece was straight-barreled and cumbersome, especially in the most posterior areas of the mouth. Furthermore, the equipment required to run the probe included a computer, monitor, keyboard, separate electronics box for water-pressure control, and a foot pedal all mounted on a large cart that could not be transported conveniently. Over the next few years, researchers, engineers, and clinicians worked to refine the ultrasound probe into a lightweight, sleek, contra-angled handpiece with standard dental-style quick disconnects and flexible tubing (Figure 2).7,9,11,13 The computerized ultrasonic equipment was made smaller so it could be easily transported and set up chairside for clinical testing (Figure 1). 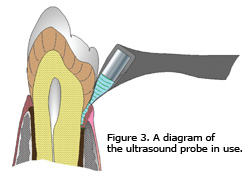 The ultrasound probe projects a very narrow beam of high-frequency (10-15 MHz) ultrasonic waves into the gingival sulcus and then detects echoes of returning waves, which are reflected back from tissues (Figure 3). A transducer mounted in the probe tip shell accommodates a small flow of water plumbed from the dental chair to ensure good coupling of ultrasonic energy to the tissues. When activated with the foot pedal, a narrow beam of ultrasonic energy is projected into the sulcus through the probe tip as it is gently passed along the gingival margin. The focused ultrasonic beam is transmitted into the sulcus in the same orientation as a manual probe, although the probe tip itself does not penetrate the tissues.

Unlike manual probing, where measurements are obtained at six sites per tooth, the ultrasound probe tip is gently placed on the gingival margin until slight blanching occurs, then swept along the entire gingival area. The ultrasound probe is able to painlessly capture a series of observations (depth measurements plus contour) across the entire subgingival area as the probe tip passes along the gingival margin, therefore yielding more information.

A proof of concept study was conducted to compare the ultrasound probe to a computerized controlled-force probe and the UNC-12 manual probe. This study sought to answer a few key questions: (1) can a non-invasive diagnostic instrument be developed using ultrasound technology, (2) will the instrument be significantly more accurate than conventional methods, and (3) can the ultrasound technology provide additional assessment information, such as the presence of calculus below the gingival margin. At baseline, three probing techniques, manual (M), constant force (CF), and ultrasound (US), were conducted on 12 participants. Full mouth probing measurements were repeated 1 hour later. This time interval was long enough to allow for examiner debriefing but short enough to capture the same gingival assessment. The treated quadrants and the method of probing were randomly assigned. To reduce interexaminer variability, a single, experienced calibrated research hygienist was used for all data collection. The examiner was not permitted to view the monitor screen during electronic data collection while the assistant recorded all manual probe readings. Loe and Silness’ Gingival Index was used at the beginning of the appointment to assess the severity of gingival tissues adjacent to selected teeth by assigning a score from 0-3 based on the amount of inflammation present.

The ultrasound probe tip was held in a vertical position, parallel to the long axis of the tooth. The tip was gently placed on the gingival margin until slight blanching of the gingiva was visualized, ensuring the complete coupling of water into the gingival sulcus, then the probe was activated with a foot pedal. When the foot pedal is engaged, a small stream of water will flow into the sulcus, along with a thin beam of ultrasound waves. As these sound waves bounce off the periodontal tissues, echoes are recorded by a tiny transducer in the handpiece and analyzed simultaneously by the computer attached to the ultrasound unit. As the examiner passes the probe tip across the gingival margin, the computer records incoming data, which employs artificial intelligence algorithms to translate output data into estimates of probing depth in millimeters.

The comparison CF probe used a thin flexible filament fiber, which was gently inserted into the sulcus. Data were captured as an optical encoder in the handpiece scanned how much of the filament remained in the sulcus at the point of contact as an indicator of probing depth. The M probe was used in the traditional manner. Pocket depth measurements from the M and CF probes were obtained at six sites per tooth. Thus, 162 teeth provided 972 independent measurements on individuals with varying levels of periodontal health.

The US probe presented data that were continuous in nature, therefore, preliminary results seem to suggest that the comparison probes (M and CF) and the US probe measure different features of the sulcus, as a result it is not obvious how the measurements correspond to each other.7 However, M and CF probing measure the depth of a sulcus by resistance to attachment epithelium, whereas the US probe measurements more likely correspond to echoes off an anatomical feature such as calculus, bone, or connective tissue attachment.

The ultrasound probe may offer an important alternative to traditional manual periodontal probing because it is non-invasive, painless, less prone to examiner variability, potentially more sensitive, and may yield additional histological information. However, more research is needed to validate these claims. Issues such as the cost of research and development and the price of bringing a new product to market all play important roles in the rates of development, production, and adoption of the new ultrasound probing technology.

Considering the success of ultrasound imaging in medicine, the use of ultrasound technology in dentistry seems especially promising. As ultrasound technology advances, researchers remain hopeful that ongoing studies will provide the information necessary to further develop existing applications. The promise of a non-invasive ultrasonic periodontal probe that does not compromise the sulcus integrity and potentially yields more real time histological information would eliminate many drawbacks to traditional manual probing, hence advancing periodontal assessment.

Thank you to Jonathan Stevens, BS, for his expertise in constructing the clinical systems and handpieces and to Margaret L. Green, RDH, MS, for her research expertise.

Gayle B. McCombs, RDH, MS, is a professor in the Hirschfeld School of Dental Hygiene at Old Dominion University (ODU) in Norfolk, Virginia. Her research interests include: new product testing; occupational risk assessment; and exploring ways to measure, prevent, and treat common oral diseases. McCombs is also a member ofæDimensions of Dental Hygiene'sæEditorial Advisory Board.

Mark Hinders, BS, MS, PhD, is a professor of Applied Science at the College of William and Mary in Williamsburg, Va. He is a former senior scientist at Massachusetts Technological Laboratory Inc in Belmont, Mass. He conducts research in wave propagation and scattering phenomena as applied to medical imaging, intelligent robotics, security screening, remote sensing, and non-destructive evaluation.

You Are What You Eat 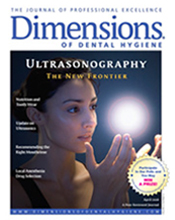