The Impact of National Origin on Caries Risk

The dental caries rate among school-age children living in industrialized countries ranges from 60% to 90%.1 Dental caries continues to be the most common chronic childhood illness in the United States.2

The American Academy of Pediatric Dentistry defines early childhood caries (ECC) as the presence of dental caries in children age 71 months or younger.3 Nursing bottle decay and baby bottle decay are common terms for ECC.3 Over the past 20 years, research has shown a decline in the incidence and prevalence of ECC in developed countries, such as the US; however, caries remains highly prevalent in minority populations.4,5

Race and ethnicity are risk factors for dental caries development.8 According to recent US government data, untreated caries is twice as common among Hispanic and Black children age 2 to 8 than in white children in the same age group.8 Additional risk factors include migrancy, parental education level, and dietary practices,6 as well as the habits and beliefs of parents/caregivers, especially mothers.2,7,9 Oral health professionals need to be aware of the influence that ethnic and cultural factors exert on oral health—specifically regarding caries prevention and education.

ORIGIN OF FOREIGN-BORN POPULATIONS LIVING IN THE UNITED STATES

Immigrants are individuals who permanently reside in a country different from their country of origin. In 2013, more than 13 million legal immigrants were living in the US.10 But the total number of foreign-born residents is much higher, as the 13 million figure does not include undocumented residents.10 Like immigrants, refugees seek to resettle in another country, but their decisions to relocate are made under duress. They may be unable to return to their home countries because of threats of persecution, violence, or other risks.11

More than 40% of the immigrants who relocated to the US between 2011 and 2013 are from Asia.12 The second largest group came from Mexico and the Caribbean.12 Most refugees who resettled in the US during the same interval are from Myanmar (formerly Burma), Bhutan, and Iraq.13 Recent government data indicate that in 2015, one-third of refugees entering the US were from Near East/Southwest Asia, which includes Iraq, Iran, Bhutan, and Afghanistan.14

Familial behaviors related to oral health are often influenced by cultural practices and norms.9 A child’s exposure to cariogenic bacteria can come through direct or indirect contact, and is considered a significant risk factor for ECC.9,15,16 A child may acquire the bacteria through contact with a parent’s/caregiver’s saliva.2,15,17 Behaviors such as testing children’s food before feeding them, as well as sharing food and eating utensils aid in the transfer of cariogenic bacteria from parent/caregiver to child.2,18

To compensate for the hardships previously faced in refugee camps, some foreign-born parents/caregivers may find it difficult to deny their children access to sugary foods and drinks.23 Also, differentiating between healthy and unhealthy options can be challenging for those who are unfamiliar with the language and food packaging of a new country.23 To improve parents/caregivers’ oral health knowledge, the caries process must be explained and the rationale provided for allowing only a bottle containing water in a child’s crib, avoiding prolonged or on-demand breastfeeding, routinely removing plaque biofilm from children’s teeth with a toothbrush and floss (if teeth are touching), and limiting a child’s consumption of sugar-containing beverages, including fruit juices.

The frequent intake of foods and drinks containing fermentable carbohydrates, such as crackers, soft drinks, and fruit juices, can increase a child’s risk for ECC. Eating behaviors established in infants as young as 6 months can impact children’s dietary habits at 12 months and 18 months.2 Healthy eating habits started in infancy may help reduce the risk of ECC.2

In some cultures, primary teeth are considered unimportant. Providing children with sugary drinks in a bottle at bedtime or with pacifiers dipped in honey are common practices.24 One study found that several immigrant populations living in America believed that children who are breastfed do not get caries.19 Additionally, some cultures think that a mother’s diet during pregnancy can cause her child to have “soft teeth.”24

Some ethnic cultures believe the purpose of brushing teeth is to freshen breath—not to prevent oral diseases.24 Foreign-born individuals may be afraid their teeth will be loosened by dental cleanings. Therefore, many immigrant populations avoid preventive dental care, only seeking treatment when there is oral pain. Research indicates that some immigrant older adults believe that the Western approach of treating primary teeth is too aggressive; thus, they may be less trusting of oral health professionals than younger immigrants.24

Prior experiences with unhealthy drinking water in their countries of origin may discourage immigrants from drinking tap water after resettlement.23 Some find the smell and the taste of tap water to be off-putting, as was reported by a mother who was accustomed to drinking fresh water from an underground spring in her homeland.23 Also, some immigrant populations may choose to drink bottled water because it is considered a sign of wealth.23 Furthermore, individuals may not be aware of the oral health benefits gained through community water fluoridation.19,23 As a result, their children may consume less fluoridated tap water, with sugar-containing drinks often provided as alternatives.23

Providing printed pamphlets and brochures to patients in their native languages may help improve oral health outcomes. English- and Spanish-language brochures are available to oral health professionals at no charge from the National Institute of Dental and Craniofacial Research at: nidcr.nih.gov/OralHealth/Topics/ToothDecay.

The oral health of children can be influenced by familial cultural practices and beliefs among racial/ethnic populations.9 Dental hygienists are well-positioned to identify children at risk for developing dental caries and to provide disease-prevention education. Providing prevention education to parents/caregivers at the earliest possible opportunity can be an important step in dental caries reduction. Oral health providers’ awareness of the difficulties and challenges faced by foreign-born populations living in the US can aid in their improved understanding of patients’ attitudes. Tailoring questions, responses, and recommendations in a culturally sensitive manner can provide improved oral health outcomes for all patients.

Deborah A. Finnegan, RDH, MS, is an adjunct faculty member in the Department of Dental Hygiene at Middlesex Community College in Lowell, Massachusetts.

Lori Rainchuso, RDH, MS, DHSc, is an associate professor at the Massachusetts College of Pharmacy and Health Sciences University in Boston where she teaches in the School of Healthcare Business, Doctor of Health Sciences Program. With 17 years of experience in higher education, Rainchuso advises graduate dental hygiene students in thesis research, and teaches interprofessional doctoral level courses. She has more than 23 publications in peer-reviewed journals, and has authored two chapters in the 12th edition of Wilkins’ Clinical Practice of the Dental Hygienist. Rainchuso can be reached at: [email protected]

Create a Culture of Safety 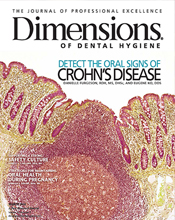