The Evolution of Air Polishing

This dynamic technique is a helpful addition to the dental hygiene armamentarium.

By Sandra Pence, RDH, MS On Mar 4, 2015 0
PURCHASE COURSE
This course was published in the May 2015 issue and expires May 31, 2018. The author has no commercial conflicts of interest to disclose. This 2 credit hour self-study activity is electronically mediated.

Air polishing was introduced in the late 1970s as a mode of plaque and stain removal. In recent years, much progress has been made in equipment design, abrasive choice, and indications for use.1 Air polishing uses compressed air mixed with water and an abrasive powder to remove soft dental deposits and stain. Air pressure settings and water/powder ratios vary between models. These settings determine the kinetic energy of the abrasive particles. The more kinetic energy, the more effect the particles will exert on the surface they contact.2 Counter-mounted units have water/air connections with a powder reservoir and lightweight handpieces that hold spray nozzles. Self-contained models are all-in-one handpieces with powder reservoirs. The handpieces attach to the bracket table and use dental unit tubing. They are convenient, but most have heavier handpieces than counter-mounted units. Conventional air polishing units are used for standard prophylaxis and orthodontic appointments.

When specially designed, low-abrasive powders are used, air polishing can subgingivally deplaque 3 mm to 4 mm pockets during periodontal maintenance. Glycine powder air polishing (GPAP), which uses a low abrasive powder and a uniquely designed handpiece with a special nozzle, can remove plaque from deeper pockets (up to 10 mm).3

Table 1 summarizes the various types of abrasive powders. The abrasiveness of air polishing powders is affected by several factors, including hardness, mass, shape, and fragmentation ability. Particle mass, determined by its density and size, significantly affects the particle’s kinetic energy. When speeds are the same, a particle with more mass will have more energy than a particle with less mass. Increased hardness and angularity also increase abrasiveness, while the tendency toward fragmentation decreases abrasiveness.3 Comparing abrasiveness of air polishing powders can be difficult due to these variables.

Calcium carbonate powder (Figure 2) has a Mohs value of 3 and is available in round particles.8 It can, however, cause defects on root surfaces.2 Bioactive glass, or calcium sodium phosphosilicate, has a particle size of 30 ?m to 90 ?m.9 With a Mohs value of 6, it has the potential to cause significant abrasion. In a recent pilot study, enamel surfaces subjected to air polishing with bioactive glass were qualitatively similar to pretreated surfaces (ie, unchanged), while cementum was altered by the uptake of minerals. Study parameters, however, may not have been sufficient to elicit the true effect on enamel, and quantitative tissue changes were not determined.10

Bioactive glass removes stain but is also marketed as a therapeutic prophy powder for treatment of dentin hypersensitivity and repair of dental tissues.11–13 Because it contains calcium and phosphorus, bioactive glass powder has remineralization properties and may oc­clude dentinal tubules. With its remineralizing capacity, it may have application in treatment of white spot lesions. Banerjee et al13 demonstrated that air polishing with bioactive glass powder was more effective in whitening and desensitizing than sodium bicarbonate, and patients experienced less discomfort. 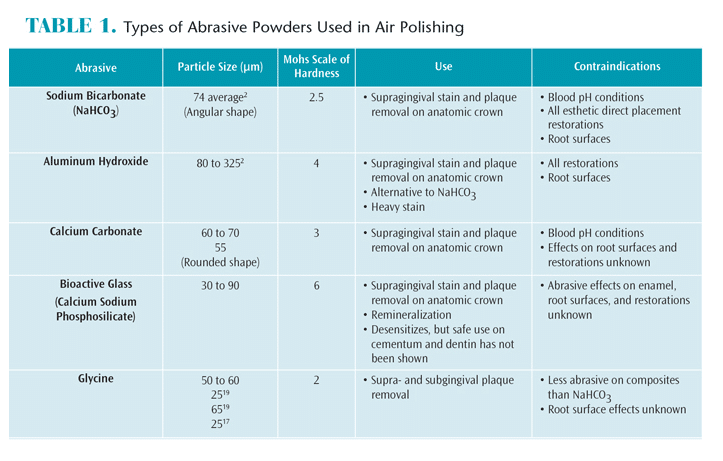 Low-abrasive powders that can be used safely in subgingival air polishing are made from either glycine or erythritol. The high abrasiveness of sodium bicarbonate, calcium carbonate, and bioactive glass contraindicate their use subgingivally. GPAP is more gentle on gingival tissue and significantly less abrasive on root structure than sodium bicarbonate.6 One study, however, showed that GPAP removed 33.9 ?m of root structure in a 20-second application.3 The clinical significance of the removal of this amount of root structure is unclear. GPAP’s deplaquing ability combined with its gentleness make it an excellent choice for use on orthodontic patients.

Erythritol, a noncariogenic sugar alcohol used as a sweetener,14 is effective in subgingival biofilm removal. Its small particle size (14 ?m) is similar to the smaller glycine particles and may limit soft tissue and root damage.15 Erythritol also exerts negative effects on mutans streptococci.16 While not yet available in the United States, more research is in progress on this potentially promising new air polishing powder.

While all air polishing powders remove biofilm, research demonstrates that sodium bicarbonate, aluminum hydroxide, and bioactive glass are also effective in stain removal.13 Because of its extreme abrasiveness, use of aluminum hydroxide should be restricted to heavy stain only.

Air polishing with sodium bicarbonate or glycine powder has been shown to safely and effectively remove biofilm from orthodontic wires and brackets.17 If the archwire is removed, however, the bracket slots should be avoided to prevent damage.1 Extended application times with sodium bicarbonate can roughen plastic brackets, so care should be taken to use the appropriate duration of 3 seconds to 5 seconds for several teeth. Glycine powder is less abrasive and does not roughen plastic brackets as much as sodium bicarbonate.17 Air polishing around bands should be avoided because it may remove the cement used for band retention.18

Glycine’s low abrasiveness enables it to be used safely supragingivally around gingival tissue as well as subgingivally. Subgingival deplaquing via hand instrumentation resulted in more tissue irritation than 5 seconds of GPAP.21

As is the case with other dental hygiene procedures, air polishing does come with certain risks. Because of the risk of gingival penetration, any patient who requires antibiotic prophylaxis to prevent endocarditis will need premedication prior to treatment.22 Air polishing is contraindicated for patients with respiratory difficulties because they may develop infections from inhaling aerosols produced during the procedure. Air polishing should be used with caution on patients who have difficulty breathing or swallowing. Close monitoring and adequate suction are imperative if air polishing is used on these patients.

Because carbonates can affect blood pH, both sodium bicarbonate and calcium carbonate should not be used on patients who have limited buffering capacity against pH changes in the blood. This includes patients with kidney disease or adrenal dysfunction, as well as those taking mineral corticosteroids.23

Though incidences are rare, use of pressurized air can result in facial subcutaneous emphysema if air penetrates into a connective tissue space.24 As such, traditional air polishing nozzles should never be directed into periodontal tissues.3,25 Symptoms of facial emphysema include facial swelling, tenderness, and pain. Patients exhibiting these symptoms must receive immediate medical care to prevent serious health problems. While the risk of facial emphysema is low, clinicians should closely follow all manufacturer instructions when using air polishing devices to reduce the likelihood of this occurring.

Inadvertent gingival irritation is common with air polishing. Trauma is difficult to avoid because biofilm and stain often reside near the gingival margin.26–29 A recent study comparing gingival effects of air polishing demonstrated that glycine produces less gingival trauma than sodium bicarbonate.21 Air polishing with any abrasive is contraindicated immediately after periodontal debridement29 or when an acute gingival condition exists, due to an increased risk of tissue trauma and facial emphysema.

Fundamental technique for traditional air polishing has not changed. Because substantial aerosols are produced during air polishing, patients’ neck and upper torso areas should be covered with a moisture-resistant apron. Lip balm is recommended to protect the lips from the drying effects of the powder. Placing a gauze square on the patient’s tongue during the procedure minimizes taste from the abrasive. The clinician and assistant, who handles the high-evacuation suction, should wear disposable or washable long-sleeved overgarments and hair covers in addition to typical personal protective equipment.29

In traditional air polishing, circular strokes are made with the nozzle held approximately 3 mm to 5 mm from the tooth surface. Direct the spray on an area (one to two teeth) for no longer than 3 seconds to 5 seconds and rotate the nozzle to reach around line angles as needed.35 Manufacturer instructions regarding the angle of spray should be followed. Again, traditional-use nozzles with abrasive powders should never be directed into the sulcus or pocket, and extreme care should be used to avoid inadvertent spraying into the gingival area to avoid soft tissue damage. While GPAP can be used subgingivally, clinicians should be well versed in appropriate technique before using this modality.

While all air polishing powders are effective in supragingival biofilm removal, only sodium bicarbonate, aluminum hydroxide, and bioactive glass are also effective in stain removal.13 GPAP is the only technique that can be used in subgingival biofilm removal.3 Air polishing has become a dynamic procedure, with new products and applications being developed. Oral health professionals will need to stay abreast of new scientific data regarding the efficacy and safety of air polishing in order to support their clinical decision making.

Sandra Pence, RDH, MS, is an associate professor and director of the dental hygiene program at the University of Alaska Anchorage, where she teaches orofacial anatomy and embryology, histology, pharmacology, and first-year preclinic and clinic. A clinical dental hygienist since 1996, Pence currently practices at Silverman Dental in Anchorage. She can be reached at: [email protected]

An Angel Who Walked Among Us 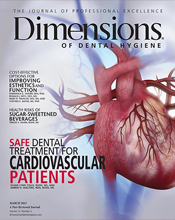