With the growing risk of exposure to emerging and re-emerging diseases, the dental practice must maintain strict infection control protocols, including protection against airborne transmission.

Over the past several years, newly emerging diseases have been frequently reported. Some of the most recent are Marburg virus, Severe Acute Respiratory Syndrome (SARS), Ebola, West Nile fever, and bird or avian influenza. At the same time, reported outbreaks of diseases that were once considered controlled or eliminated are increasing, such as tuberculosis, Pertussis (whooping cough), and drug resistant Staphylococcus (MRSA). One of these emerging or reemerging diseases may be carried by patients seeking routine dental treatment and thus become a diagnostic and infection control concern for dental personnel.

The most important and prevalent disease to emerge in the recent past is HIV/AIDS. A previously unknown disease, HIV/AIDS dramatically affected dental treatment and completely redefined dental infection control. HIV may have been present in Africa for many years but was not recognized as a defined disease entity until the early 1980s.1 Interestingly, one of the first hints of this new disease entity came from the observation of an increased incidence of Kaposi’s sarcoma, a lesion that is most often found in the oral cavity.2 Following the initial recognition of HIV, the disease was documented to spread from a relatively small population to the millions of cases that are now reported. Currently, the disease is frequently encountered during routine dental treatments. The effect of HIV on infection control in the dental office has led to the universal use of gloves, masks, and handpiece sterilization. Today it is difficult to envision performing hygiene procedures without these precautions, but less than 20 years ago these standard infection control procedures were almost never followed. In a brief period of time, HIV has overhauled the way dentistry is performed.

It is unlikely another disease will emerge in the foreseeable future that will affect dental procedures to the same extent as HIV. First, many of the precautions and procedures that are now considered universal for dental treatment also protect against many newly emerging diseases. The exceptions are diseases that are routinely spread by an airborne route. The most documented of the emerging diseases spread in this manner is SARS but some of the newer flu-like diseases arising in parts of Asia may also be spread the same way as SARS./p>
During the initial outbreak, some investigators suspected that SARS was spread by aerosols and contaminated droplets but there was a general resistance to the possibility that it was a true airborne disease. Subsequent to the initial outbreak of SARS, detailed epidemiological analysis of the disease spread has given strong support for the airborne route of transmission. One of the largest clusters of SARS occurred at the Amoy Garden apartments in Hong Kong. Analysis of the disease spread-from the initial case within the apartment complex to the several hundred residents that eventually contracted the disease-clearly showed that the disease was spread via air currents from a vent pipe.3,4 Another study showed that a large number of SARS viral particles are present in the saliva, sputum, and tears of SARS patients. The authors of this study felt that the SARS virus may be universally present in the aerosols arising from SARS patients’ mouths. They also stated that these aerosols were the likely method for transmission of SARS from infected patients to health care workers who were not in direct contact with the patient.5

Many of the recommendations to control contaminated aerosols in medical care facilities and hospitals require major engineering changes, such as placing ultraviolet chambers in the ventilation system. Some of these changes are cost prohibitive for the average dental office. However, several relatively simple and inexpensive procedures can effectively limit the amount of contamination from dental procedures,7 such as the routine combined use of preprocedural rinses and large diameter high volume evacuators (HVEs) during all dental procedures. Because a preprocedural rinse only kills those organisms present in easily accessible areas, the use of a preprocedural rinse alone is inadequate. The most important step for control of airborne contamination is routine use of the HVE. A saliva ejector, because of its typical placement in the floor of the mouth and the small diameter of the tube, does not function as an HVE and is inadequate for the control of contaminated aerosols.7

Most emerging diseases initially present as flu-like symptoms characterized by fever, respiratory problems, and a feeling of malaise. In the case of SARS and avian flu, these symptoms may progress to respiratory distress and often death. Ebola and Marburg virus infections start in a similar flu-like manner and progress to generalized spontaneous bleeding and death. Marburg and Ebola are classified as hemorrhagic fevers because of the associated often fatal bleeding.8 It is unlikely that patients in the acute phases of these diseases would seek dental treatment but it is possible that dental treatment would be performed during the early flu-like phase. For this reason, patients who indicate they are “coming down with the flu” should have their appointment rescheduled so their treatment is performed after their symptoms have disappeared.

It is difficult to list the signs and symptoms of emerging diseases due to the fact that the diseases are often poorly understood. The lack of understanding of the diseases and the disease process are the main reasons that it should be assumed that all patients carry an infectious disease, hence the need for standard or universal precautions for all patients. Table 1 lists some of the emerging diseases, their method of transmission, and their relative risk to dentistry.

Many diseases once thought to be controlled or eliminated are returning to the general population and are increasingly likely to be seen in the dental office. The relaxing of vaccination schedules and requirements for children has led to the reemergence of many common childhood diseases as has the overuse or improper use of antibiotics. Many diseases that were easily treated with antibiotics 20 years ago are now resistant to most antibiotics. Some of the pathologic streptococci and staphylococci found in the oral cavity and nasal pharynx are now resistant to common antibiotics. The reemergence of tuberculosis in a drug resistant form is associated with the improper use of medication. If the anti-tuberculosis medications are not taken regularly and for the prescribed period of time, the disease reappears and the bacteria become resistant to standard drugs. A third reason is the increased number of immune compromised individuals.9 Many medications and diseases affect the body’s immune system, making a patient more likely to be infected by a disease that is easily controlled in a patient with a healthy immune system.

Methicillin-resistant Staphylococcus aureus or MSRA is a disease likely to be encountered in a dental setting.10 This staphylococcal infection is an example of a bacterium that no longer responds to routine antibiotic treatment.

Many years ago, some staphylococcal infections were becoming increasingly resistant to routinely used antibiotics. These infections were usually associated with hospitals and became known as hospital resistant staphylococcus. Over time, these bacteria became resistant to stronger and stronger antibiotics until the only antibiotic that would control the infection was Methicillin. Recently some staphylococci have become resistant even to Methicillin. These were first noted in prisons and other institutional settings but within the past year, MRSA infections have been reported with increasing frequency in the general public.

The most likely situation where MRSA would be encountered in dentistry is as skin lesions on the patient’s face and lips. Staphylococcal infections are usually manifested by redness of the affected tissue as well as the classic signs of fever, pain, and malaise. These infections are spread relatively easily to other parts of the body, possibly including the oral mucosa. The greatest danger to the hygienist is from a break in standard barrier precautions. A likely scenario is for the hygienist’s gloved hand to come in contact with a patient’s skin lesion and then, by touch, transfer the bacteria to an unprotected part of the hygienist’s body. Any contact of the bacteria with micro-breaks in the skin or to eye and nasal mucosa is an opportunity for an infection.

As with emerging infections, defining specific signs and symptoms for diagnosing reemerging diseases is difficult. The presenting symptoms for many of the reemerging diseases can be described as flu-like. In the case of MRSA, the symptoms are boils or skin eruptions with possible red lesions in the mouth. Many of the oral manifestations of sexually transmitted diseases such as syphilis and gonorrhea are also first seen as red patches or boil-like lesions of the skin or mucosa. Only in later stages do diseases like Syphilis develop their classic signs of chancre or mucous patches on the tongue or palate. Table 2 lists some of the re-emerging diseases.

Careful and strict adherence to standard infection control procedures offers protection from most of the diseases discussed. Because many of the emerging and reemerging diseases can be spread by droplets and aerosols, control of airborne contamination from operations such as ultrasonic scaling and air polishing need to be controlled with an HVE. The CDC has recommended the use of an HVE whenever droplet or aerosols are produced during dental procedures11 but this recommendation is often ignored during the performance of hygiene procedures. This is an unacceptable risk.

Treatment of patients with flu-like symptoms should be avoided. Not treating patients with a fever of unknown origin or those with signs of respiratory symptoms was a major factor in the control of the SARS outbreak in Asia. In areas where SARS cases were known to exist, signs were placed in waiting rooms indicating that treatment would not be performed if the patient had a fever or flu-like symptoms. It was recommended that treatment be postponed until at least 24 hours after the flu symptoms or fever had disappeared. In the dental office, where adhering to a schedule and seeing a certain number of patients in a day are major goals, there may be a tendency to see patients even if they are a little sick. The inherent danger of this practice should be discussed with all staff members who are responsible for scheduling patients and an office policy should be in place to help protect the entire dental staff.

The Supportive Role of Industry 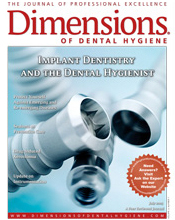